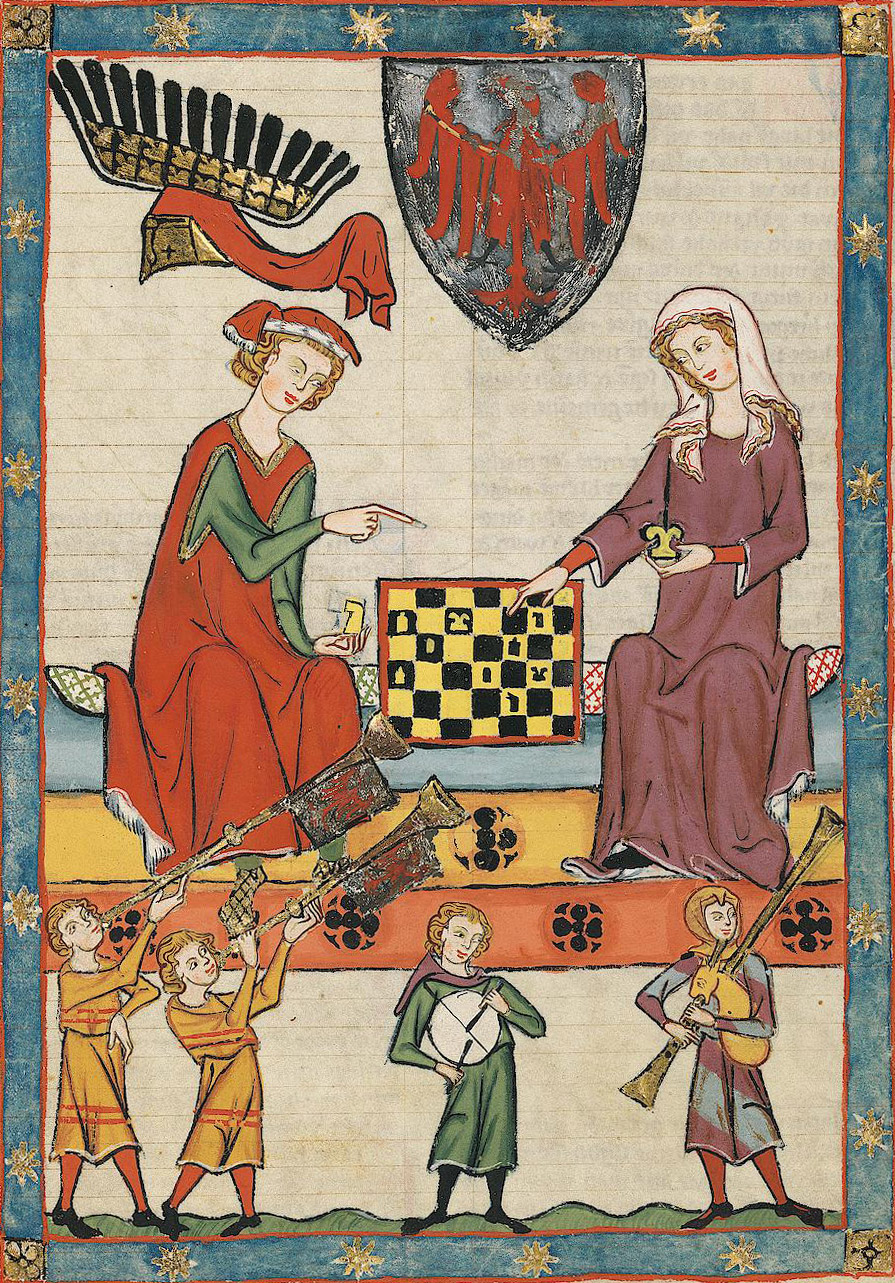 Returning triumphantly from leading the Huns in savage battle, Walter of Aquitaine entered the chamber of King Attila the Hun. There he met Hildegund of Burgundy. She was the beautiful young woman to whom he had been betrothed from childhood. Attila the Hun had taken both Hildegund and Walter from their parents as hostages. Alone in the king’s chamber, they embraced and enjoyed sweet kisses.

Hildegund administered the kingdom on behalf of Attila’s wife Ospirin. But Walter was no boot-licking General Belisarius. With manly self-assertion he said to Hildegund after his exhausting martial work:

Swiftly bring me here drink! I am tired and out of breath.

She, striving to please her man, brought him a precious goblet filled with undiluted wine. He held her hand, and she looked at him intently. He then offered her a drink from the goblet. He said:

We have both endured exile so long —
not being unaware of what by luck our parents
arranged between us for our future life.
How long will we remain silent about this?

Hildegund thought that Walter was satirizing her and the idea of getting married. She remained silent for awhile. Then she burst out in epic eloquence:

Why fake in speech what you reject deep in your breast,
and with your mouth urge what you spurn with all your heart,
as if it were a great shame to marry such a bride?

In a more colloquial translation, “So you’re gay, so you’re just not into me, is that it?” Walter, a wise young man with extraordinary masculine self-control, had important plans. He also was learned in the game of love. He confidently dismissed Hildegund’s words:

Away with what you say! Set straight your sense!
Since no one is here but us alone,
know that I spoke nothing from a deceiving mind,
don’t think anything nebulous or false was mixed in.
If I knew you would focus for me a ready mind,
and faithfully, carefully keep your vows through everything,
then I would offer you all the mysteries of my heart.

Scarcely anyone today can even imagine a man speaking such words to a woman. That’s why there’s now an epidemic of sexless marriages. To overcome that imaginative and performative disability, recognize reality and natural laws of cause and effect:

At last the maiden, bowing at the man’s knees, proclaimed:
“To wherever you call me, my lord, I will eagerly follow,
nor would I prefer anything above your pleasing commands.”

Walter himself couldn’t overturn gynocentrism. But he acted so as to secure Hildegund’s respect for him.

With a careful plan and faithful execution, Hildegund and Walter escaped from the court of Attila the Hun. Walter carried heavy armor and weapons so that, if necessary, he could fight to protect Hildegund and himself. After forty days of flight, he spotted a well-protected cave nestled in the lush Vosges valley of northeastern France. Declaring that he needed rest, he led Hildegund to that cave.

Needing rest is natural, even for men, yet in seeking rest men run the risk of appearing weak. Men have the burden of continually maintaining a strong masculine frame to retain women’s passion for them. Walter masterfully handled that burden:

Putting aside his heavy burdens of war, he then said,
collapsing into the maiden’s lap: “Keep a careful watch,
Hildegund, and if you see a dark dust-cloud rising,
awaken me with your charming touch of gentle reminding,
and even if you should see a huge troop advancing,
take care, my dear girl, not to disturb my sleep immediately,
for from here one can see clearly to a far distance.
Attentively scan all points around the region.

Walter putting his head into Hildegund’s lap shows fine masculine initiative. Even better was his wry assertion of masculine self-confidence: if a huge troop is advancing to attack us, don’t wake me too soon. I want to enjoy a little more sleep before I deal with that problem. Readers should understand that Hildegund scanned the region with a smile on her face and a tingle in her loins.

Soon Hildegund spotted a group of heavily armed men advancing on horseback. Because she hadn’t learned the lesson that Erec taught Enide, she woke Walter when the group of armed men was still far away. Walter casually wiped his eyes to enliven them from his deep sleep. Then with sleep-stiff limbs he put on his clothes and armed himself. He began to prepare for battle by whipping his sword through the air.

“We have the Huns here,” she said,
and falling to the ground in great sorrow spoke out:
“I beg, my lord, that my neck be cut by your sword,
so that I, not obtaining union with you in the marriage bed,
shall not suffer carnal intercourse with any other.”

A virgin woman yearning to experience her beloved man’s sword is completely understandable. While Jephthah allowed his daughter to bully him into killing her, Walter was a strong, independent man. He thus refused to do what a woman begged him to do:

In response the young man said: “Shall your innocent blood stain me?”
And, “How can my strong sword strike down my enemies,
if it does not now spare so faithful a friend?
Away with your request! Toss fear from your mind!
The one who has often led me out of various dangers
can here, I believe, rout this enemy of ours.

While he rejected yes-dearism, Walter like far too many men didn’t sufficiently value his own life. Facing brutal fighting against a numerous foe, including the highly skilled warrior Hagen, Walter said to Hildegund:

If only, God willing, I can disrupt his strength,
then,” he said, “from this battle my life shall be saved for you, Hildegund, my spouse.”

Every man’s life deserves to be saved for its intrinsic value and dignity, irrespective of whether he has a loving spouse. Epic violence against men continues because not every man has the courage to reject it.

Walter at least rejected Hildegund’s entreaty to kill her with his sword. Men are made for loving, not killing. At the same time, men should not expect romance to be simple. A man must be strong and skilled enough to build and sustain sexual tension to enjoy a long and loving conjugal partnership.

[2] Hildegund regarded Walter’s prior words as spoken “in irony {per hyroniam}.” On the medieval meaning of that term:

One fragmentary manuscript of the Waltharius glosses the Latin hyoniam with the Germanic word spot (whence the modern German Spott), meaning “mockery” or even “sarcasm”

[3] Hildegrund poignantly alludes to the words that Ruth the Moabite spoke to her Jewish mother-in-law Naomi. Ruth 1:16.

[4] Nickel associates Walter putting his head in Hildegund’s lap with a folkloric tradition in which a warrior puts his head into a princess’s lap under a tree and asks her to examine his head for lice. In a still surviving oral version, when the man falls asleep and the princess looks up in the tree, she sees eleven hanged women in the branches. Nickel (1973) p. 141. This folktale motif is completely different in tone from the corresponding events in the Waltharius. Ring rightly calls the relationship between the stories “highly speculative.” Ring (2016) p. 176, n. 121.