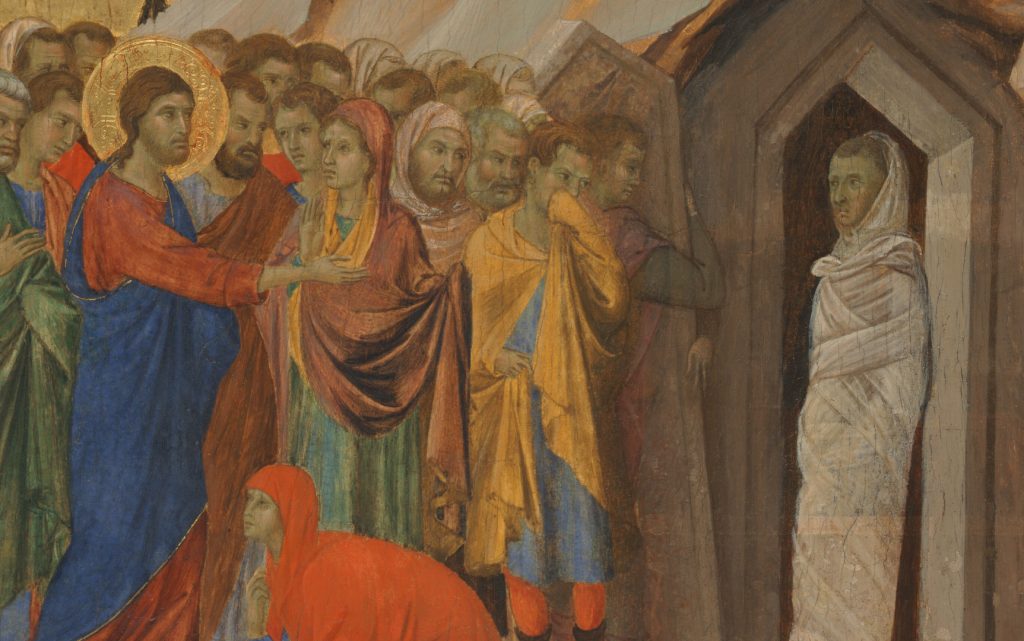 With the heavily armed Frankish men rapidly approaching, Walter of Aquitaine went to the entrance of the cave where his beloved-betrothed Hildegund had retreated. There he said:

Now before the entryway I speak a haughty boast:
none of the Franks returning from here will be able to say
to his wife that he has with impunity taken any of our great treasure.

Epic heroes generically boast to their fellow warriors. Walter boasted to his betrothed, and his boast addressed the household matter of what other men would say to their wives. Is epic struggle ultimately about husbands seeking to win their wives’ admiration?

Not yet having finished his speech, suddenly to the earth
he fell and begged forgiveness for such he had said.

Walter didn’t beg forgiveness for travestying epic conventions. He apparently begged forgiveness for his pride, the most serious sin in Christian thought of the time.[2] He went on to acknowledge that he would escape alive the forthcoming battle only “god willing {volens deo}.”

The epic’s ending isn’t obviously pious. Walter fought against his close friend Hagen and the Frankish king Gunther. Walter escaped that battle alive, but not unwounded:

After it was finished, each of them was marked:
there lay King Gunther’s foot, there Walter’s palm,
and here the still-quivering eye of Hagen.
In just such a way they divided the Avarish bracelets.
Two of them sat together (the third was still lying on the ground)
and they wiped the torrential river of blood off the flowers.
In the meantime, Alpharides called back the fearful girl
with a shout. She came and bandaged each wound.

The “Avarish bracelets” are treasure that Walter and Hildegund stole from the poem’s Pannonian Avar king Attila the Hun. The word “Avarish {Avarenses}” probably was meant to pun with “avarice {avaritia}.”[3] The wounds to the three men invoke self-punishment to prevent further sinning, as described in Mark 9:42-8. Mark there connects the ancient understanding of righting interpersonal wrongs to Christian self-consciousness in seeking forgiveness. The name Alpharides is an epic patronymic for Walter, son of King Alphere of Aquitaine. Despite his cut-off eye twitching on the ground, Hagen managed to help Walter wipe their blood from flowers. Resonating with that incongruity is the fearful girl. She is Hildegund, the strong, independent woman who administered the finances of Attila the Hun’s kingdom. She acted with Christian compassion for all, like Jesus the Good Physician. In addition to bandaging the men’s wounds, she offered them wine.[4] Then Walter and Hagen “playfully jest with each other while drinking {inter pocula scurrili certamine ludunt}.” That’s the epically bizarre ending to the fighting in the Waltharius.

The Waltharius closes off epic narration in a distinctly Christian way. Walter returned to his home kingdom. There Hildegund and he were married. After his father died, Walter reigned as king for thirty years:

What kind of battles and what great triumphs he often
received… behold, my blunted pen refuses to write any more.
…
This is the poetry of Walter. May Jesus save you!

In Christian understanding, God became the fully human Jesus, born in a small provincial town to a carpenter and an undistinguished young woman. Jesus engaged in ordinary life, ate with everyone, and playfully mocked his disciples. Jesus healed the sick in earthy ways and raised the dead Lazarus to life through drama that non-Christian Greco-Roman elites would regard as ridiculous. God, like the pen of the Waltharius’s author, refused with Jesus to write the proper matter of epic.

The prologue to the Waltharius subtly sets out its Christian program. The difficulty in interpreting it comes from not fully appreciating Christianity historically. One medieval scholar explained:

The ludus poeticus (poetic play) requires leisure, it represents a jest or witty game by contrast with serious literature; it can be used almost synonymously with nugae ‘trifles’ and be equated with iocus ‘jest’; and on rare occasions it can designate poetry at large as opposed to serious, political work.[5]

Are the Christian gospels poetry, or serious, political work? An eminent medievalist, ignoring the problem and idealizing a distinction between jest and earnest, categorized the Waltharius unequivocally in medieval thought:

The epic of Waltharius, then, was considered lusus, like all poetry without a Christian-ethical trend.[6]

Such high-level interpretation has driven philological reading of the prologue:

One gets the sense that the poet is not entirely serious when using the commonplaces of epic narratives dealing with war; whether this sort of parodying is intended as critique, however, and what value we are to give such a critique, is far from clear. … the preface states unequivocally that the poem is not intended for edification, but for amusement [7]

Here’s what the last seven verses of the prologue say in a reasonable translation:

Servant of the highest God, do not look down on the words of this little book.
It does not sing of God’s nourishing, but resounds with amazing deeds of
the young man Walter, maimed through much fighting.
It requires one to jest with the Lord rather than to petition the Lord.
When read through, it shortens the undistinguished hours of the long-aged day.
May you, holy priest, be happy through further years,
may Gerald your dear brother be in your mind.

The final two lines invoke brotherly affection and simple happiness. That provides meaningful context for the key, central verse: ludendum magis est dominum quam sit rogitandum. That verse has been uniformly translated with the sense, “It requires one to play rather than pray to the Lord.” However, the words ludendum {play / jest} and rogitandum {pray / petition} bracket the line with dominum {Lord} in the middle. Grammatically, dominum could go with either participle, or both. Inter-personal jesting better reflects the Waltharius’s Christian sense than does the more ordinary Christian practice of petitioning God for help or nourishment. Not merely mocking classical epic, the Waltharius brings to classical epic an extraordinary Christian sense of human comedy.[9] 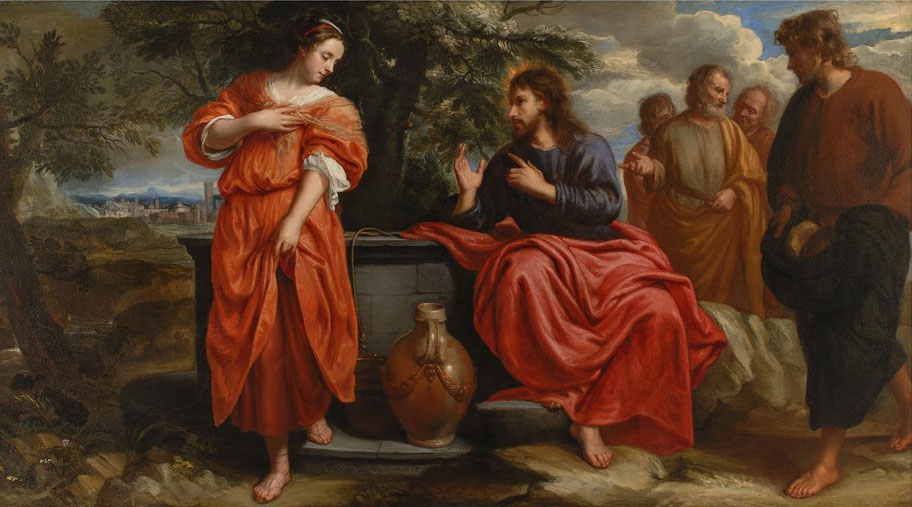 The Christian gospels aren’t an epic story of a hero-savior. They are more like the Life of Aesop. They overturn the dominant order and offer salvation in ordinary life. That salvation comes through God who becomes the friend and companion of humans, humans who repeatedly act wrongly.[10] The Waltharius engages in the literary way of the Christian gospels.

[3] Waltharius, ll. 4-5, 11, associate the Pannonians with the Huns and state that King Attila ruled over them. The historical Pannonians, Huns, and Avars were three different populations. Ring (2016) p. 166, n. 22. The interpretation of Avarish {Avarenses} and the subsequent textual points in the above paragraph come mainly from the excellent textual notes in id.

[4] Women couldn’t be Christian priests in medieval Europe. Yet Hildegund quasi-sacramentally offers wine twice. On the first occasion, Walter made the sign of the Cross when receiving wine from her. Waltharius l. 225.

Hrotswitha meant her poetic legends to be regarded as ﬁctional, she nonetheless dedicates them with a wish that they be read to pass away the time when the reader is worn out by labour.

Id. p. 33. In the tenth century in Lower Saxony (Germany), Hrotswitha wrote in her Dedicatio 7:

and, when worn out by various labour,
deign to read these verses for entertainment.

In addition to valuing entertainment, medieval thinkers recognized fundamental significance for laughter. About the end of the tenth century and writing at the Abbey of St. Gall, where some regard the author of Waltharius to have resided, Notker III (Notker Labeo) asserted: “the human is a animal that is rational, mortal, and capable of laughter {homo est animal rationale, mortale, risus capax}.” De Definitione, Latin text as cited in Adolf (1947) p. 251. That definition adopts a definition of “man” that Boethius cited to Lady Philosophy. Adolf insightfully observed:

laughter might have been considered the natural consequence of combining two qualities as contradictory as mortality and reason. Indeed modern theories on laughter have reached exactly this conclusion. … it all boils down to the opposition between ‘mortale’ and ‘rationale’ — strange bedfellows indeed, only to be reconciled by laughter.

McKeown (2010), Ch. 8 supplement (modified insubstantially for readability). This view became summarized in describing humans as the species Homo ridens (the animal that laughs). Notker also declared “that which is laughable is human {quia quidquid risibile est, homo est}.” That gave rise to the species term Homo risibilis (the laughable animal). Cf. humans as an “animal capable of rationality {animal rationabile}.”

[6] Curtius (1953) p. 430. This statement comes in the section “Comic Elements in the Epic” within a lengthy, rambling excursus entitled “Jest and Earnest in Medieval Literature.” Medieval Europe differed from classical antiquity:

From what has so far been set forth, it follows that the polarity “jest and earnest” is, from the late antique period onward, a conceptual and formal schema which appears not only in rhetorical theory, in poetry, and in poetics, but also in the circle of the ideal of life established by the panegyric style (in this respect it is comparable to the topos puer senex). … We may, then, view the phenomenon as a fresh substantiation of the view that the Middle Ages loved all kinds of crossings and mixtures of stylistic genres. And in fact we find in the Middle Ages ludicra within domains and genres which, to our modern taste, schooled by classicistic aesthetics, absolutely exclude any such mixtures.

His reference {that of the author of the Waltharius, perhaps Gerald} to play points at once to the reader, who by perusing the Waltharius is opting not to perform the sacred task of praying, and to the contents of the poem, which despite the gore spilt in the battles have a playful side that precludes categorizing the Waltharius as either undiluted heroism or undiluted tragedy. The poem, like most of life, is far more artful and complicated than that.

Ziolkowski (2001) p. 51. Ordinary life usually isn’t undiluted heroism or undiluted tragedy, but it’s also not typically thought of as poetic. Through the incarnation of God as the man Jesus, ordinary life became poetic in a Christian perspective.

Ghosh (2015) p. 183, n. 146. The author of the Waltharius more likely was committed to particular Christian perspective well-appreciated in the European Middle Ages, but little recognized today.

[8] Waltharius, prologue ll. 16-22. My translation above differs significantly in the Waltharius’s statement of how it should be read (prologue l. 19). Other translations emphasize mere entertainment. “It requires one to play rather than pray to the Lord” in Ring (2016). “It is for playing more than praying to the Lord” in Kratz (1984). “The aim is to delight, rather than to instruct in religious terms” in Murdoch (1996) p. 93. “If and when it is important to play rather than to pray to the lord” in Ziolkowski (2001) p. 51. “It is more for entertainment than for beseeching God” in Ghosh (2015) p. 181, n. 142. These translations aren’t incorrect. But “It requires one to jest with the Lord rather than to petition the Lord” seems to me a better translation in context. I’m grateful for an expert Latin philologist pointing out to me that ludere with the accusative generally means “mock,” but that lighter meanings are possible.

[9] On the Waltharius mocking classical epic and Germanic folk legend, Kratz (1980). The Waltharius is a Christian epic that builds upon early Jewish Christians speaking in tongues with the coming of the Holy Spirit:

And all were amazed and perplexed, saying to one another, “What does this mean?” But others mockingly said, “They are filled with new wine.”

[10] The gospels repeatedly depict the disciples falling asleep when they should be awake, seeking high positions as Jesus’s disciples instead of being humble, seeking to fight violently when they should accept God’s plan, and being weak of heart and willing to betray their friend and master Jesus. See, e.g. Luke 22:39-46, 54-62, John 18:10-11, Mark 14:45-50, John 6:66-7.

[images] (1) The Raising of Lazarus. Made by Duccio di Buoninsegna about 1310-11 to be part of the altarpiece for the high altar of Siena Cathedral in Italy. Preserved as accession number APx 1975.01 in the Kimbell Art Museum (Forth Worth, Texas). (2) Jesus conversing with the Samaritan woman at the well. Made by Jacob van Oost the Younger in 1668 in Bruges. Thanks to Wikimedia Commons.