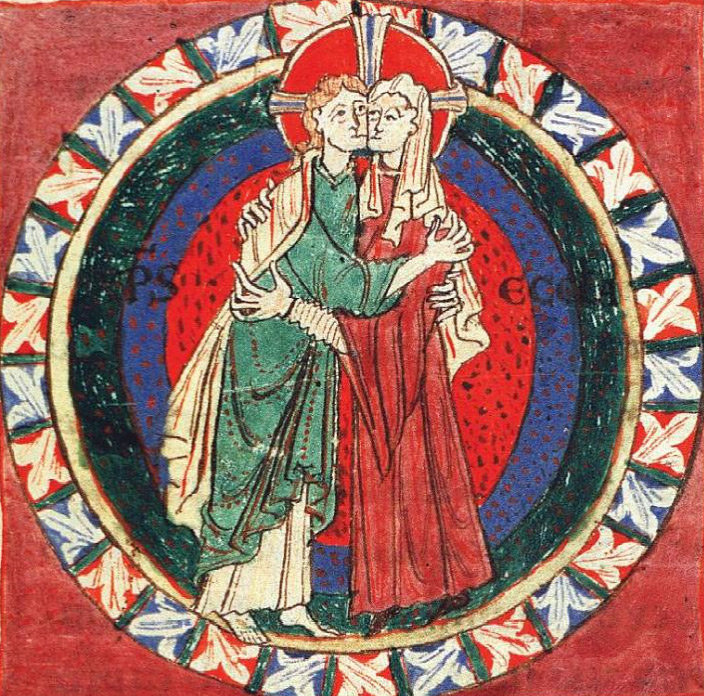 Literature of men’s sexed protest — literature in which men protest gender injustices that they suffer — has been written throughout recorded history. This important literature has too often been trivialized, disparaged, and marginalized. But ask yourself: why would men protest so bitterly about women’s treatment of them? The truth about gender relations is both clear and nearly unspeakable. Women hold dominating power over men’s welfare. Men-oppressing gynocentric structures of gender inequality are prevalent. Women’s loyalty to men works to mitigate both women’s power over men and the gender inequality that men endure. Hence women’s disloyalty and betrayal of men particularly spurs men’s sexed protests.

Some expressions of angry gender protest, although permitted in relatively liberal medieval Europe, today would be categorized as hate speech. For example, early in the twelfth century, a woman student in the women’s convent at Regensburg wrote a short letter to her man teacher. In her letter, she dehumanized him:

You should be called a monkey or a sphinx. You look like them
with your deformed face and your unkempt hair!

Women in the women’s convent in twelfth-century Regensburg probably encountered few men. Men are characteristically more hairy than women. The woman student’s disparagement of her man teacher apparently was a gender-based attack.

We define hate speech as a direct attack on people based on what we call protected characteristics — race, ethnicity, national origin, religious affiliation, sexual orientation, caste, sex, gender, gender identity, and serious disease or disability. We also provide some protections for immigration status. We define attack as violent or dehumanizing speech, statements of inferiority, or calls for exclusion or segregation.

Tier 1 of Facebook’s hate speech, the most severe of its three tiers of hate speech, specifically includes dehumanizing speech:

Dehumanizing speech or imagery in the form of comparisons, generalizations, or unqualified behavioral statements to or about:
– Insects
– Animals that are culturally perceived as intellectually or physically inferior

Monkeys today are culturally perceived as intellectually inferior to humans. The woman in the women’s convent in twelfth-century Regensburg thus engaged in “hate speech” under Facebook’s community standards. For a young woman today, being expelled from Facebook for hate speech amounts to harsh social exclusion. It’s like a woman in the twelfth-century Regensburg women’s convent being ordered to remain alone in her physical room.

An early twelfth-century letter from a woman student at Tegernsee explicitly engages in a gender-based attack on men. The woman student wrote to her man teacher:

You men certainly are sly, or to say it better, deceitful. You habitually ensnare us simple young girls in talk. We almost always, from our simplicity of mind, proceed with you into the field of words. You pierce us with the right reasoning, so you think, of your darts.

Not common meanness, but a sense of personal and political injustice drives men’s sexed protest. Consider a twelfth-century lament of Hugh Primas:

On these Ides of May, misery like that of Menelaus
made me weep, not knowing who had taken from me Flora.
The time was the flower season when she, my flower, the finest blossom,
left where we’d been sleeping and caused my sorrow and my weeping.
..
Perhaps another at a penny’s price has carried you away,
the lowest of the base, not knowing from where we grieve.
Just as a turtledove, away from her man, flies mournfully —
deprived once of her mate, she then neither loves nor cares to be loved —
so I fly around directionless and recline alone at home in misery.
To change by deceit the one familiar to me at my side — that I refuse.
In conduct I am like the turtledove, whom by nature is chaste,
for whom, as soon as cruel death has taken his first wife,
would have no pleasure in trying a second in his bed.
But you, mendacious and cunning, laugh while I weep,
you not sleeping alone, now fickle like Venus’s pigeons.
Passion in their loins makes them change one bed for another.

Men love women profoundly and loyally, sometimes even within a sexless marriage. At the same time, men depend upon women for comfort and support within the oppressively anti-men circumstances of gynocentric society. That exacerbates the danger of gyno-idolatry. Women have far greater sexual privilege than men do, as the historical prevalence of men paying women for sex attests. When an woman betrays a man for material benefit, she rubs in his face her female privilege. When she betrays him for a penny’s price, she shows contempt for his loving heart and his need for her.

Whoever you are who believes in the loyalty of a woman,
do you not see that only broken loyalty remains in a woman?
Believe me, if you believe her, that you will be deceived,
for that loyalty she gives to you, she will violate right away.
When she swears to you that she cares for you above all,
notice that what she swears only shortly endures.
She will owe you nothing after what you have becomes hers.
After you leave and believe her loyalty to you,
if then a man approaches her with a gift —
any unknown man — you henceforth will soon be forgotten.
If he’s ugly or one-eyed or dark-skinned,
then he will be preferred to you, if he gives more gifts.
She swears to him by the body of God, by the body of saints,
that apart from him she doesn’t love any men.
Thus beware: don’t allow yourself to be captured by any woman,
for no woman knows indeed to maintain loyalty.

In this poem, the Latin word for “loyalty” is the same word for “faith.” Jews, Christians, and Muslims in medieval Europe knew the story of Eve and Adam, as it’s now called. Before Eve came to be celebrated as a strong, independent woman, she was criticized (gasp!) for believing words of the satanic serpent and leading her husband astray. This poem connects the sins of Eve (in following the serpent’s advice) and Adam (in following his wife’s advice) to disloyalty in women generally. This poem protests powerfully against the common tendency to believe women and women behaving with contempt for men’s interests.

A gentle breeze arises from the west and a warming sun comes forth;
now the earth bares her bosom and flows out with her sweetness.
Spring has come forth, dressed in crimson, and donned her finery;
she scatters flowers on earth and leaves on the trees of the forest.
Animals build lairs, and birds, sweet nests;
among flowering trees they sing out their joys.
While I see this with my eyes and hear this with my ears,
alas, instead of those great joys I swell with great sighs
as I sit alone, and thinking these thoughts, turn pale.
If by chance I lift my head, I neither hear nor see.
You, for the sake of spring, at least listen and ponder
the leaves, flowers, and grass — for my soul is ailing.

Thus let stay far away from parties of young women
he accustomed to being a wolf threatening ewes!

Regensburg Songs 36, Latin text from Dronke (1965) v. 2, p. 438, my English translation, benefiting from that of id. Disparaging men as wolves is a well-attested historical dehumanization.

The Regensburg Songs are probably from the early twelfth century. They have survived in only one manuscript: Munich, Bayerische Staatsbibliothek, MS Clm 17142. Newman notes:

These aristocratic convent {women} pupils never forget that, by virtue of their social rank, it is they who hold the real authority {relative to their men teachers}.

Id. Many women students today have a similar attitude toward their men professors.

The Tegernsee Love-Letters are from the Bavarian abbey at Tegernsee. Dronke noted:

even if these love letters stem from or were sent to a convent {of young women: conventus iuvencularum} or a foundation of canonesses, this does not necessarily mean that the writers had dedicated themselves to the religious life. On the contrary, the writer of the longest and subtlest of the Tegernsee letters — the first in my group of three — {and also the author of letter 10, the third in Dronke’s group of three} makes explicit that she also moves in the world of curialitas {courtliness}: indeed, she says things in praise of knights that disquiet the clerical friend to whom she writes them. We should envisage her not as a nun, but as a well-born girl who is spending some years at a cultivated women’s foundation which is, so to speak, her finishing-school, from where she will probably return, highly prized for her humanistic education, to a world of curialitas and aristocratic marriage.

The letter-writer’s invocation of “us simple young girls” is disingenuous. Dronke observed:

The sheer affective and expressive range in her two letters is unusual; and her uses of literary allusion are perspicacious and penetrating. Cicero and Horace, the Song of Songs and the Book of Job, Ovidius puellarum and Boethius, all enter her argument effortlessly.

Dronke (2015) p. 226. Not innocent of the tactic of rhetorical projection, the letter-writer quoted a German proverb:

what the goat knows of himself,
he blames the she-goat for the same.

Newman ignores the anti-meninism of this letter. She calls it a “little gem of a letter – witty, affectionate, yet fierce.” She interprets the woman student’s disparagement of her man teacher and all men in a way that reflects now-pervasive criminalization of men’s burden of soliciting amorous relations:

she calls him out on his duplicity. This teacher and his ilk, she argues, encourage their students to turn girlish crushes into love by writing over-the-top letters about fidelity and friendship, mastering the hyperbolic mode of their day. Then, once the teacher has bated his trap — or, in the writer’s metaphor, lured a “simple young girl” onto the battlefield of words — he strikes, perverting his victim’s “good and wholesome [words]” in order to proposition her. Undeceived, the writer rebukes her would-be seducer in no uncertain terms.

[4] Ripoll Songs 18, “Whoever you are who believes in the loyalty of a woman {Quisquis eris qui credideris fidei mulieris},” Latin text from Wolff (2001) p. 84, my English translation, benefiting from the French translation of id., p. 85.

Much earlier the African poet Pentadius, writing about 290 GC, expressed a similar sentiment:

Trust your ship to the winds, but don’t trust your heart to a girl;
for a sea-wave is more trustworthy than a woman’s loyalty.
No good woman exists, or, if one turns out to be good,
I don’t know the decree by which a bad thing has been made good.

Pentadius, “About woman {De femina}, Latin text from Brittain (1962) p. 68, my English translation, benefiting from that of id. Regarding the author of this poem:

It has been ascribed to a variety of authors besides Pentadius — to Marcus Cicero, to his brother, to Petronius, to Ausonius, and to Porphyrius, the panegyrist of Constantine. The epigram has been claimed for Quintus Cicero as a vigorous expression of a thought which might have been in his mind after his divorce (Ad Att. XIV. 13. 3). But it cannot be argued that either the situation or the reflection was by any means peculiar to him.

[5] Cambridge Songs 40, “A gentle breeze arises from the west and a warming sun comes forth {Leuis exsurgit zephirus et sol procedit tepidus},” Latin text and English translation (modified slightly) from Ziolkowski (1994). My modifications draw upon Ziolkowski’s thorough notes, id. pp. 289 (note to 3.1), 290 (note to 6.1).  Here are English translations by Helen Waddell, Peter Dronke, and David Ferry. In 6.2, I follow Dronke’s more literal translation of anima as “soul” rather than Ziolkowski’s translation “heart.” The word sola in 5.1 identifies this poem’s speaker as a woman.