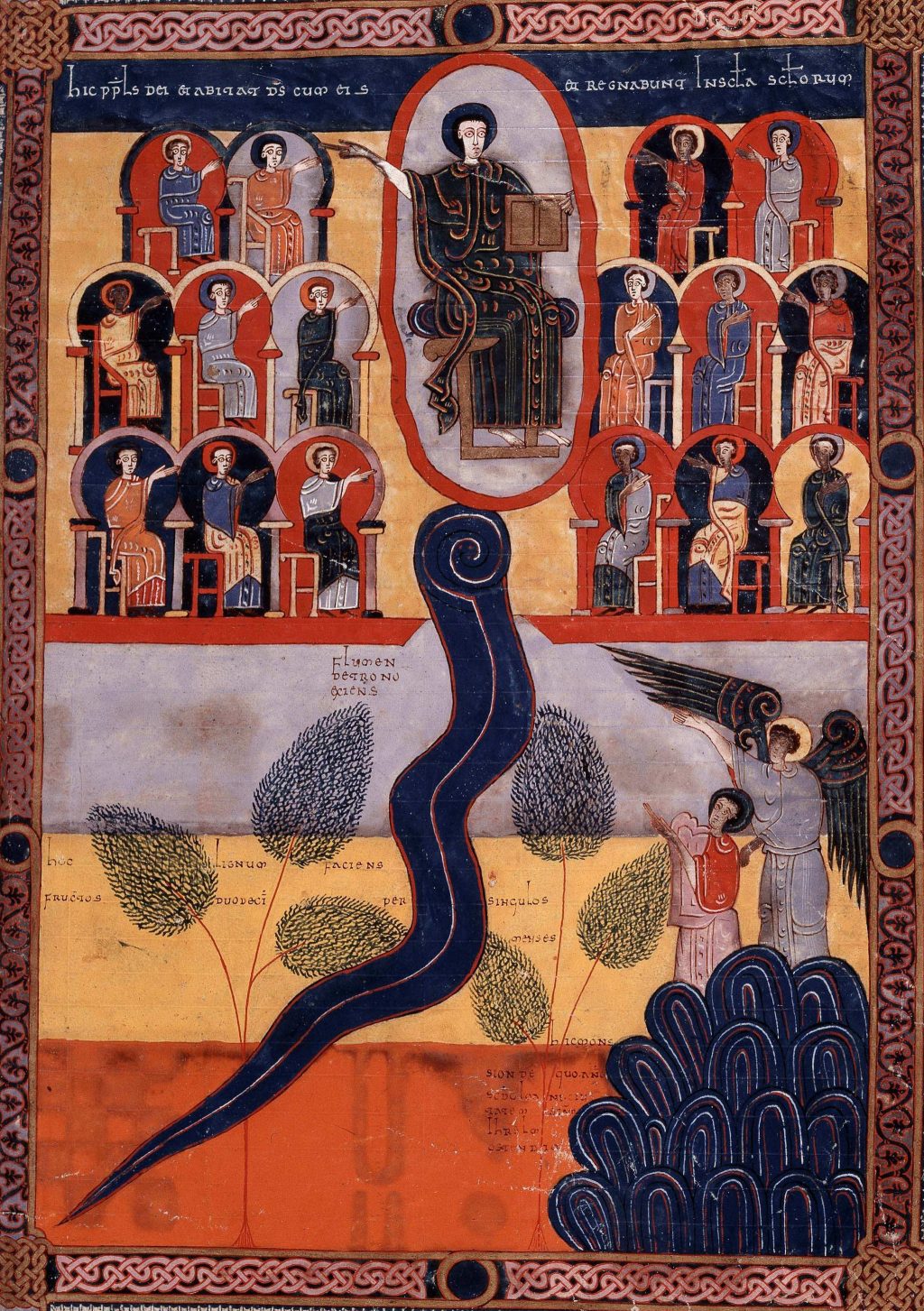 The melodious nightingale and heavenly Jerusalem, two ancient figures, are significantly gendered. As all are now taught from a tender age, gender is socially constructed. That’s beyond question by definition. Poets in the relatively liberal and enlightened medieval period, however, dared to re-imagine the female genderings of the melodious nightingale and heavenly Jerusalem. They re-imagined these female gender figures with keen appreciation for men’s sexual interests and men’s social subordination.

In the reality of the natural world, the male nightingale sings melodies to attract a female mate. An ancient myth-maker, however, reversed the singing nightingale’s gender. That was to enable the Philomela myth and foster social silence about men being raped and violence against men. In the seventh century, facing down this mythic horror, Eugenius of Toledo pushed aside men’s gender burden of soliciting amorous relationships and re-imagined the nightingale as a woman pleasing a man with her sweet words. He wrote:

No other bird can ever imitate your singing;
sweet honey flows with your fluent, rippling notes.
Speak with vibrant tongue your tremulous warbling,
and pour liquid melody from your smooth throat.
Offer attentive ears food with sweet-sounding flavor,
never to silence cease, never to silence cease.
Glory and blessings and praise to Christ our Savior,
who grants his servants good gifts such as these.

In Eugenius’s highly sensuous poem, the woman bird pleases the man with her bodily gifts, which ultimately are from God. God grants persons the pleasure of enjoying each other bodily. Stating that was possible in seventh-century Europe. In our Dark Age of totalitarian anti-meninism, honoring and praising a bird for providing bodily pleasure to a man is scarcely tolerable.

In fourteenth-century Italy, Boccaccio recognized the gender mutuality implicit in Eugenius’s figure of the melodious nightingale. He told the story of Caterina, a highly privileged, beautiful, young single woman. She fell in love with Ricciardo. He was a noble young man who loved her as she loved him. They sought to get together to save each other from dying of lovesickness. But Caterina’s parents guarded her carefully, as if young men threatened her like dangerous beasts.

Caterina ingeniously contrived to sleep with Ricciardo. She explained to her parents that her bedroom was too hot for her. She said that to be cooler, she wanted to sleep out on the balcony over the garden. In that garden, a nightingale sang. Caterina told her parents that the nightingale, undoubtedly a male bird, gave her delight. Her mother responded that their house wasn’t hot and that Caterina should sleep inside. Caterina, however, explained to her mother that young women are much hotter than older women. Her mother and father finally allowed her to sleep outside on the balcony over the garden.

As they had pre-arranged, that night Ricciardo climbed up to the balcony to where Caterina had placed her bed. Then they saved each other from dying of lovesickness:

After many kisses, they lay down together, and almost for the entire night, they took delight and pleasure in one another, many times making the nightingale sing.

As Boccaccio understood, the singing nightingale is a male bird. But what specific form of bird? The course of events soon revealed:

But, short being the night and long their pleasure, when daybreak was near (although they wished it not), having gotten heated up by the time and their play together, they fell asleep while completely naked. As she slept, Caterina’s right arm cradled Ricciardo’s neck, while her left hand held him by that part that you ladies are too modest to name in the presence of men.

After dawn, Caterina’s father walked out onto the balcony to see how his daughter was sleeping with the nightingale’s song. He gently lifted the curtains around her bed. Then he saw them naked, with Caterina embracing Ricciardo in the way  just described. Her father called to his wife:

Quick, lady, get up and come and see that your daughter was so desirous of the nightingale that to such purpose she has caught him and holds him in her hand.

The nightingale here means Ricciardo’s genitals. That’s a brilliant re-imagining of the singing nightingale as a male bird. In the words of the seventh-century poet Eugenius, glory and blessings and praise to Christ for such a good gift.

And I saw the holy city, the new Jerusalem, coming down from God out of heaven and made ready as a bride adorned for her husband.

Blessed city Jerusalem,
called vision of peace,
constructed in heaven
from living stones
and crowned by angels
like a bride by friends.

Young woman coming from heaven
to the marital bed,
ready to be made spouse,
to be united with her Lord.
Her spaces and boundaries
are made from purest gold.

Her doors shine with pearls,
with her inmost shrines being open,
and by manliness of the deserving
into that place are lead
all who in Christ’s name
are oppressed in this world.

The joy that the young woman from heaven promises for the marital bed will last forever in a restful paradise:

Here all are deserving
to obtain their desires
and to hold that acquired
with the saints forever,
and to enter paradise,
conveyed in bed.

As a victim of castration culture, Peter Abelard understood personally and painfully what it means to be an oppressed man. He praised the heavenly Jerusalem, the young woman who fulfills completely men’s desires:

True Jerusalem is that city,
forever united in peace, the highest delight,
where desire doesn’t overtake the act’s fulfillment,
nor is the reward less than the desire.

Spouses should repeat this beautiful stanza to each other every night before they get into bed. Single persons should repeat it to themselves in hopeful joy, without any delusions of being self-partnered. The heavenly Jerusalem figured as female doesn’t contribute to gynocentric oppression if she’s united in bed with a man.

Not just the penis’s image problem, but many other historically entrenched gender figures also contribute to disparaging and oppressing men. The female gendering of the melodious nightingale effaces men laboring to uphold their gender burden of soliciting amorous relationships. The female gendering of the heavenly Jerusalem structures a heavenly city with earthly, oppressive gynocentrism. Medieval poets were capable of re-imagining these gender figures to promote a more humane and just world for men, and for everyone. Yes we can, too.

Heavenly city, blessed city,
upon a rock situated,
city in a port of plenty safety,
from afar I salute you.
I salute you, I sigh for you,
I desire you, I require you.

[1] Eugenius of Toledo, “Your voice, nightingale, urges one to proclaim songs {Vox, Philomela, tua cantus edicere cogit},” Latin text from Brittain (1962) p. 126 (a text is available online), my English translation benefiting from that of id. and Adcock (1983) p. 19.

The author of “Vox, Philomela, tua cantus edicere cogit” is specifically Eugenius II of Toledo. He died as Bishop of Toledo in 658 GC. Eugenius had perhaps a typical educational background of a learned person in seventh-century Spain:

as he had read widely and intelligently among the classical poets and his immediate predecessors, he was able to command a variety of metres and subjects.

Raby (1934) vol. 1, p. 150. Eugenius achieved considerable distinction. His poems were widely read, including in England and among the Carolingian poets. Id. p. 151.

Her incessant, yet not hoarse
whistling voice is never mute,
as she chants her incantations
like a woodland prostitute,
puffing up her puny figure
full of music and conceit.

Will you never stop that racket,
you over-rated little bird?
Do you think your art surpasses
all the singing ever heard?
Don’t you know that other music
is quite frequently preferred?

As you bash your tinkling cymbals
with excessive jollity,
wakeful crowds of gentry
egg you on with flattery:
your eternal serenading
wins the praise of royalty.

Stop it, stop it, you’re a nuisance —
surely now you’ve tired that beak?
When I try a little snoozing
on the sly, you make me sick.
Must you every moment sing
as if worthy of applauding stars?

[2] Boccaccio, Decameron 5.4, Italian text that of Branca’s Einaudi edition (1992) via Decameron Web, my English translation benefiting from those of Rigg (1903) and Rebhorn (2013). Subsequent quotes from this story are similarly sourced.

[4] “The blessed city Jerusalem / called vision of peace {Urbs beata Jerusalem / dicta pacis visio},” st. 1-3, Latin text from Brittain (1962) p. 127, my English translation benefiting from that of id. and Neale (1851). This hymn is from the sixth or seventh century. For some traditional analysis of it, Belsole (2017).

[5] “Urbs beata Jerusalem” st. 8, sourced as above. This stanza is also st. 4 in “Christ is put as the corner stone {Angularis fundamentum / lapis Christus missus est}.” The latter is the second part of the former. It apparently was established as a separate hymn in the Moissac Breviary in the tenth century. Here’s the translation of Neale (1851) (alternate source). Both parts of “Urbs beata Jerusalem” were used in the service for the 750th anniversary of the rebuilding of Westminster Abbey.

[6] Peter Abelard, “O of what quantity and quality are the Sabbaths {O quanta qualia sunt illa sabbata},” st. 2, Latin text from Mark Walter in the Classical Anthology, my English translation benefiting from those of id., Brittain (1962) pp. 195-7, and Neale (1854). Here’s the music for the hymn, and a performance of it.

[7] Hildebert of Lavardin, “May that Zion receive me {Sion me receptet illa},” ll. 18-22, Latin text from Brittain (1962) p. 192, my English translation, benefiting from that of id. and the one provided by Michael Gilleland. Hildebert of Lavardin (lived in France, 1056-1133) was a leading poet of his time. Hildebert had keen appreciation for men’s gender disadvantage.

[image] Heavenly Jerusalem, the bride from heaven. This manuscript illumination includes the flower of life, the tree of life, and a representation of men’s seminal contribution to life. From a Beatus, made by Facundus for Ferdinand I and Queen Sancha. Preserved as folio 254 in Madrid, Biblioteca Nacional, Ms Vit.14.2. Via Wikimedia Commons. Here are more images from the magnificent Beatus of Facundus. The monk Beatus of Liébana, living in the monastery of Martin de Turieno (near present-day Santander on the north coast of Spain) in the eighth century made what became the prototype of a book known as a Beatus. For discussion, Williams (2011).

Addison, Catherine. 2009. “‘Darkling I listen’: The nightingale’s Song In and Out of Poetry.” Alternation: Journal of the Centre for the Study of Southern African Literature and Languages. 16 (Special issue ; 2): 190-220.

Belsole, Kurt. 2017. “‘Urbs Ierusalem Beata’: The Hymn for Evening Prayer for the Dedication of a Church.” The Institute for Sacred Architecture. 32. Online.