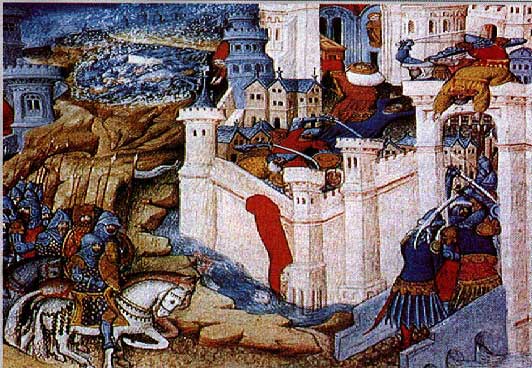 In 410, Alaric, King of the Visigoths, culminated his third siege of Rome by sacking the city for three days. About seven years later, Rutilius Namatianus, a former head governor of Rome, returned from Rome to his native home in southern France. Gothic invaders had also devastated southern France. Rutilius was deeply invested in Roman tradition and gynocentric society. His poetic account of his journey home, On returning home {De reditu suo}, is filled with tense oppositions.[1] Rutilius’s inability to integrate his experience of collapsing gynocentric society shows in his sharp criticism of hated others.

Hear, O queen, O fairest of your universe,
O Rome, received among the starry skies,
of humans and gods alike the mother, hear my prayer,
for your temples grant proximity to heaven.

We sing of you and always will, while fate allows —
everyone alive remembers you!
Accursed oblivion will hide the sun before
the honor that I owe you leaves my heart,

for you extend your gifts just as the sun its rays
where all-embracing Ocean ebbs and flows.
The Sun, who holds all things in place, revolves for you:
its steeds both rise and set in your domain.

Rome is the beautiful queen, the mother. Men revere their mothers. They desire beautiful women. They delight in women ruling over them. No one can imagine that gynocentric society could collapse. The Roman Empire did collapse.

Some Roman men rebelled against gynocentrism. Briefly recounting that “a citizen was lost to living death {perditus hic vivo funere civis erat}” by going to live in a cave on a cliff, Rutilius heaped scorn on Men Going Their Own Way (MGTOW):

Not long ago, our friend, a youth of noble birth,
appropriately wed, with ample means,
went mad, abandoning the world and the human race
for exile in this filthy den, the fool!

This wretch believes divinity can feed on filth.
He does himself more harm than the gods he spurned.
Is not this sect, I ask you, worse that Circe’s drugs?
While she changed human bodies, they change minds.

This young man spurned the traditional elite Roman married man’s life and became a Christian ascetic. Why would a wealthy noble man abandon his wife and go to live in rags and filth on a cliff? Perhaps he felt that his marital life was lacking in some way. Circe changed men into happy pigs. Christianity offered an alternate lifestyle. Many men are foolishly committed to traditional gynocentrism. They, like Rutilius, castigate men who repudiate everyday gynocentrism and the gender inequalities of ordinary life.

Rutilius viciously disparaged Jewish men merely because they rest one day a week. On his way home, Rutilius stopped at Falesia in southern Greece. He complained about the Jewish innkeeper of a pleasant country inn:

He’s an animal, cut off from human food,
who charges us for breaking shrubs and hitting seaweed,
and begrudges us the water we have drunk!

We pay him back with all the scorn that’s owed a filthy
and disgraceful race that circumcises.
The root of foolishness! They love their chilly Sabbath,
but their hearts are colder than their creed.

Every seventh day is damned to lazy sloth,
a feeble image of its tired god!

Men typically bear a triple burden of work. Most men work outside the home for money. Men also often engage in gender-unequal unpaid work around the home, such as establishing, reviewing, and maintaining household sports-entertainment subscriptions, repairing household motorcycles, cleaning and lubricating household guns, provisioning, storing, and rotating the household cigar stock, roughhousing with the kids, etc. Above and beyond that gender double burden, men have the additional gender burden of performing unpaid erection labor. Under Roman gynocentrism, Roman men didn’t even have one well-established rest day a week. Roman men were expected to be like worker-gods who never tire while still maintaining a hotly passionate heart. Roman men resented the modest Sabbath protection from gynocentric exploitation that Jewish and Christian men enjoyed.

Rutilius hated the leading Roman general Stilicho even more than he hated Jewish men and ascetic Christian men. The son of a provincial Roman woman and a Vandal soldier, Stilicho, by serving in war’s horrible violence against men, rose to become the most powerful man next to his wife in the Roman Empire. Stilicho had his forces fight alongside Visigoth King Alaric I against the western Roman emperor-claimant Eugenius. Stilicho burned Sibylline books sacred to traditional Roman religion. In 408, Stilicho persuaded the Roman Senate to agree to pay Alaric a large ransom not to invade Italy. After a political reversal later that year, Stilicho was executed for treason. Alaric went on to sack Rome in 410. Rutilius declared:

How much more bitter was the crime of Stilicho,
the cruel betrayer of the empire’s heart?
As he struggled to outlast the Roman race,
his bloody madness overturned our world,

and while he feared the very Goths who made him feared,
he sent barbarian arms for Latium’s death
and plunged an armed foe into her naked vitals —
an even bolder trick that brought disaster.

And Rome herself, exposed to skin-clad troops,
was captive even before she could be captured.
It wasn’t only Gothic arms the traitor used:
he burned the books that brought the Sibyl’s aid.

We hate Althaea for the deadly torch she burned;
the bird, they say, still mourns for Nisus’ lock,
but Stilicho threw away the empire’s pledges
and Fate’s spindles, full of destiny.

Let Nero be released from all of Hades’ torments,
let hellish torches burn a grimmer ghost,
for Nero killed a mortal, but Stilicho a goddess:
one murdered his mother, the other the world’s mother.

Rutilius figured Stilicho as promoting violence against a woman, Rome. Threats of violence against women incite men to violence against men. Violence against men is normative violence. Thus Rutilius without any marking of gender associates Stilicho with Althaea killing her son and Nisus physically assaulting her father. Within traditional Roman gynocentrism, the worst offense is doing harm to the highest mother — the goddess Rome, mother of the world.

Mired in traditional Roman gynocentrism, Rutilius struggled to understand how barbarians could have sacked sacred mother Rome. He hated those whom he perceived to be Rome’s internal enemies. While misconceiving them, Rutilius at least recognized the importance of internal enemies. For both women and men, we have met the enemy, and she is us. 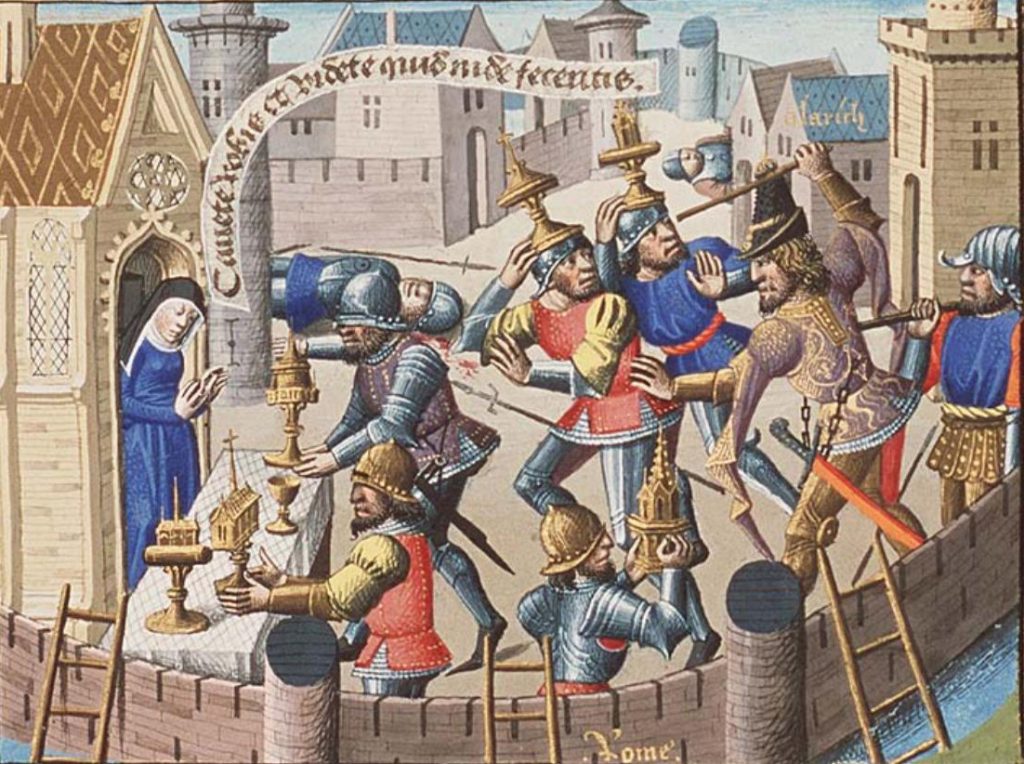 Even when the poet alludes only slightly to the acute problems of his day (the collapse of Roman power in the West, the decline of central government, the ravaged provinces and sacked towns), a tension is felt in every episode and each observation he makes. … The seemingly loosely connected episodes are kept together by an all-pervading opposition of stability and impermanence, of decay and lasting fame, of human mortality and the eternity of Roma.

Verbaal (2006) p. 158. Unity in opposition is roughly equivalent to inability to integrate.

As we proceed by the sea, Capraria rears itself:
the island reeks with men who shun the light.
They are called monachoi — the name is Greek — because
they want to live alone, without a witness.

They fear both Fortune’s gifts and Fortune’s punishments:
they hug the very misery they dread.
What stupid madness of a perverse mind is this,
to fear that happiness will cause them harm?

Prisoners seeking punishment for crimes, perhaps,
or grim hearts swelling with the blackest bile
(as Homer thought the worries of Bellerophon
came from an illness caused by excess bile,

for pierced by savage grief, the story goes, the lad
conceived a hatred of the human race).

De reditu suo vv. 1.439-52. Rutilius’s description of Bellerophon is characteristically prejudicial. Bellerophon overcame a devastating false accusation of rape. Under gynocentrism, the serious problem of false accusations of rape tends to be trivialized.

Apparently Rutilius considers Christianity to be a dangerous enemy of this mythologized Roman bureaucracy, especially in its more radical forms as incorporated by the monks and hermits. For this reason, his poem is a much stronger attack on Christianity than it has been considered until now. …
Yet this conclusion must be qualified. The poet is not such an enemy of Christianity that he cannot bring himself to close the poem with the eulogy on the Christian {Consul of Rome} Constantius. He attacks Christianity only in so far as it prevents people from facing up to their responsibilities. As soon as Christians show themselves in their acts to be good Romans, i. e. adherents of Rutilius’ ‘cult’ of Roma, their religious background becomes less important. According to our poet, a man has to be first of all a Roman citizen. His other convictions, what ever they may be, are of little account.

Men must follow the life path that mother Rome sets out for men:

Roma is the mother of men and gods. She can give mortal man a nearly divine status if he only wants to serve her, i. e. if he does not refuse the responsibilities of the cursus honorum, which allows him to approach mythical greatness and which assures him eternal glory and divine adoration after his death.

[4] De reditu suo vv. 1.384-92. Just as for Christians, some Jews were Roman citizens: “a not inconsiderable number of Jews in Rome had become cives Romani by the time of Augustus.” Rutgers (1994). With the “root of foolishness {radix stultitiae},” Rutilius refers to Judaism’s status as the root of Christianity. Christians identify themselves as fools. 1 Corinthians 1:18-21, 4:10.

In the above passage, Rutilius also refers to God resting on the seventh day in Genesis’s account of creation. Genesis 1:27, 2:2-3. Rutilius used the term imago in a thematically coherent way across De reditu suo. Verbaal (2006) pp. 165-7.

The Latin text for De reditu suo 2.47-8 is awkward. A proposed solution is to emend:

{ plunged an armed foe into her naked vitals —
an even bolder trick that brought disaster. }

{ plunged an armed foe into her naked vitals —
a wile more wicked than that which brought disaster on Troy. }

[images] (1) Alaric’s sacking of Rome in 410. Anachronistic fifteenth-century French miniature. Via Wikimedia Commons. If you have a more accurate citation for this image, please supply it in the comments below. (2) Romans seeking to preserve sacred vessels during Alaric’s sacking of Rome. Illumination from instance of Augustine, La Cité de Dieu, translated from the Latin by Raoul de Presles. On folio 9v in MS. The Hague, MMW, 10 A 11. Via the National Library of the Netherlands.