The woman’s action in seventeenth-century Nottinghamshire underscores the importance of breaking the cycle of castration. According to a widely printed ballad, a baker was riding a castrated male horse, a gelding, to the Nottingham market. That horse had smooth skin and a soft, fatty figure. The first-century Roman emperor Domitian had his slave boy Earinus castrated to preserve Earinus’s boyish appearance against the onset of puberty. After seeing the baker’s horse, a devil sought to have the baker castrate him so that he would have smooth skin and soft flesh like the baker’s gelding. At the devil’s request, the baker gelded the devil. 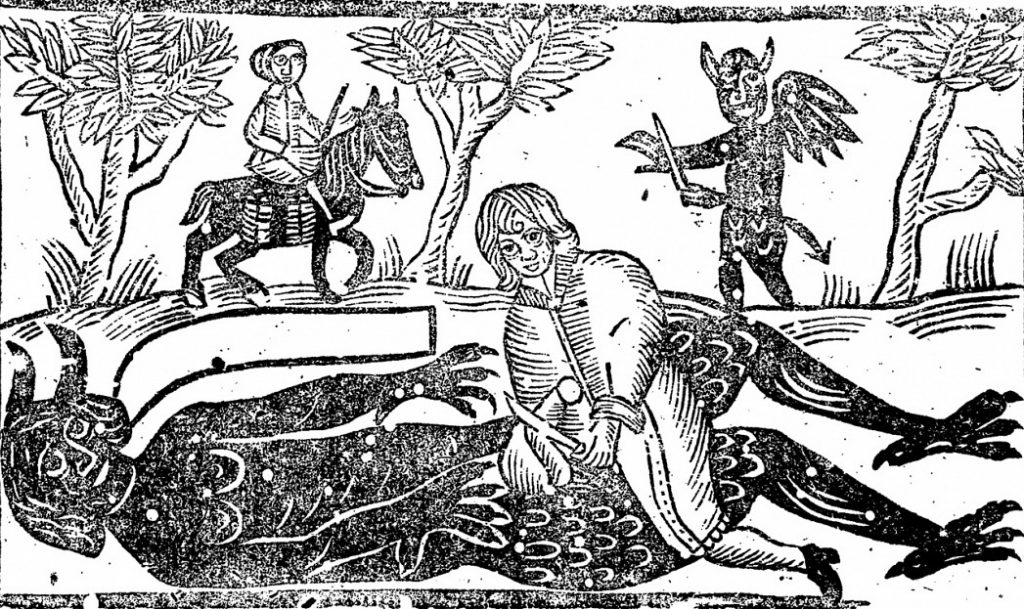 Listening to the devil and facilitating castration is always a grievous wrong. Castration begets further castration. The devil suffered great pain from his castration and bitterly regretted it. The devil vowed that in revenge he would castrate the baker on the next market-day. The baker returned home full of fear and sorrow. He told his wife what had happened:

Oh, quoth the good wife, without doubt,
I had rather both thy eyes were out.

Although the baker, like most husbands, would do anything to please his wife, he didn’t know what he could do against the devil’s intent to castrate him.

The wife took charge of the fight against castration. She understood that gender is merely a social construction, and used that banality against the devil. She declared to her husband:

I’ll make the devil change his note.
Give me thy hat, thy belt and coat,
thy hose and doublet add also,
and like to a man I will go.
I’ll warrant thee next market-day
to fright the devil quite away.

On her way to the market, the devil accosted the cross-dressed baker’s wife and declared that he would castrate her. The cross-dressed wife then shrewdly deployed women’s privileged immunity against castration culture:

The baker’s wife to the devil did say,
sir I was gelded yesterday.
Oh, quoth the devil, I mean to see,
and pulling her coat above her knee,
and so looking-upward from the ground,
oh, there he spy’d a terrible wound.

Oh, quoth the devil, now I see,
he was not cunning that gelded thee,
for when he cut out thy stones,
he should have closed up thy wounds.
But if thou’lt stay some little space,
I’ll fetch some salve to cure the place.

Oh, said the devil, thy life’s not long,
thy breath it smells so horribly strong.
Therefore go thy way and make thy will,
thy wounds are past all human skill.
Be gone, be gone, make no delay,
for here thou shalt no longer stay.

In twelfth-century England, Roland the Farter had to fart annually for the king in order to keep his land. Men trobairitz in thirteenth-century France were willing to fart so strongly as to generate enough wind to save women caught in a lull half-way to the Holy Land. Women’s farting ability, however, has been historically marginalized. This heroic, cross-dressed wife drove away the devil with a strong fart and saved her husband from castration. She should be celebrated equally with the traditional textual canon in literature classes.

The above quotes are from the ballad “The Gelding of the Devil, or the prettiest jest that ever was known, how the baker’s wife her skill has shown. Then listen a while, and I the news will tell, between the baker and the devil of Hell.” I’ve modernized the capitalization and punctuation, and made a few other insubstantial changes for ease of reading. The last couplet of each stanza is repeated. I haven’t included that repetition above. Textual transcriptions of “The Gelding of the Devil” are available online for the ballads British Library, Roxburghe, EBBA 30663 (dated 1670?); Magdalene College, Pepys, EBBA 22015 (dated 1674-79); and British Library, Roxburghe, EBBA 31054 (dated 1763?). Other online instances are Oxford, Bodleian Bod18828 (Douce Prints S 9) and Bod24092 (Douce Ballads 3).

From the middle of the seventeenth century this song circulated relatively widely in England:

“The Gelding of the Devil” was entered as a broadside in the Stationers’ Register in 1656 and in the same year a version was printed in Sportive Wit. … The poem was often reprinted, appearing in An Antidote against Melancholy, 1661, Merry Drollery, 1661, Merry Drollery Complete, 1670, Wit and Drollery, 1682, Wit and Mirth, 3d ed., 1682, in all editions of Pills, 1719-1720, III, 147, and in other seventeenth- and eighteenth-century collections. Henry Bold’s Latine Songs, with their English, 1685, preserves the stanza form in Bold’s translation.

Simpson (1966) pp. 248-9. For the version via Henry Bold, see Bold (1685) song 19 / canticle 19. Learned Latin literature commonly crossed over into popular vernacular songs and stories. Ziolkowski (2007). “The Gelding of the Devil” may have developed out of medieval Latin works such as Guibert of Nogent’s story of the devil’s misandry and the twelfth-century poem De pulice.

An early sixteenth-century German story tells of a bear asking a man to castrate him so that he could become a monk. The man then castrated the bear. But being a castrated bear wasn’t sufficient to become a monk. The bear threatened to castrate the man in revenge. Fortunately, the man’s wife, pretending to be him,  comforted the bear by showing him her vagina. See Hans Sachs, Complete Collection of Fables and Farces {Sämtliche Fabeln und Schwänke}, Goetze & Drescher (1900) eds., vol. 3, no. 25.

Recent scholarly work has greatly misinterpreted castration culture as a “battle for chastity” that concerns only men’s experience and men’s bodies:

Over the course of a millennium, the details of the mystical castration stories move away from the individual man’s battle for chastity, but the battle remained a quintessentially male discourse embedded in male experience and the male body.

Murray (2019) p. 116. While only men suffer castration, castration culture is intimately related to the female body and female experience.

Murray, Jacqueline. 2019. “The Battle for Chastity: Miraculous Castration and the Quelling of Desire in the Middle Ages.” Journal of the History of Sexuality. 28 (1): 96-116.