Guillaume de Machaut’s poem The Judgement of the King of Navarre {Le Jugement dou Roy de Navarre}, which he probably wrote shortly after the terrible plague of 1349, depicts a farce of gendered justice. A lady brought Machaut before the King of Navarre on the charge: “you have committed crime against women {vers les dames estes forfais}.” Specifically, Machaut had offended women with poetry he had written about women and men. Led by his allegorical-women advisors, the King of Navarre convicted Machaut and sentenced him to write more poetry to please women.

In medieval Europe, just as today, men faced harsh punishment for not pleasing women. Anyone writing anything critical of women runs the risk of being labeled a misogynist, or even worse, an anti-feminist. Machaut was afraid:

Not because of any misdeed
I myself had supposedly committed;
rather because I feared those gossip-mongers
who are at times harmful
because of their falseness and envy
to good people who lead decent lives.
And so I dreaded this turn of events.
Yet I was certain I had done
no harm in my whole life
to any woman whomsoever.

But women felt that he had harmed them. Many persons would just listen and believe such a claim. They would then cause him grave harm.

And how did you dare say this
or write it down in your book?

Machaut had failed to have the Paragon-Guardian Content Tribunal review and approve his poem before he published it. He didn’t understand how society is actually governed.

Considered gender-neutrally, the charge against Machaut could easily be dismissed. Which woman suffers more: a woman whose beloved man leaves her for another, or a woman whose beloved man dies? The pregnant Dido killed herself because Aeneas left her. Public policy accordingly indicates that women suffer greatly from men betraying them. Specifically, a man who has sex with a woman cannot freely leave her with an unintended pregnancy. A huge state penal apparatus deprives men of reproductive choice by forcing financial fatherhood on men who sought just to have sex. Such public policy goes unquestioned even amid much public concern for reproductive choice. The underlying belief seems to be that women suffer greatly from men betraying them. 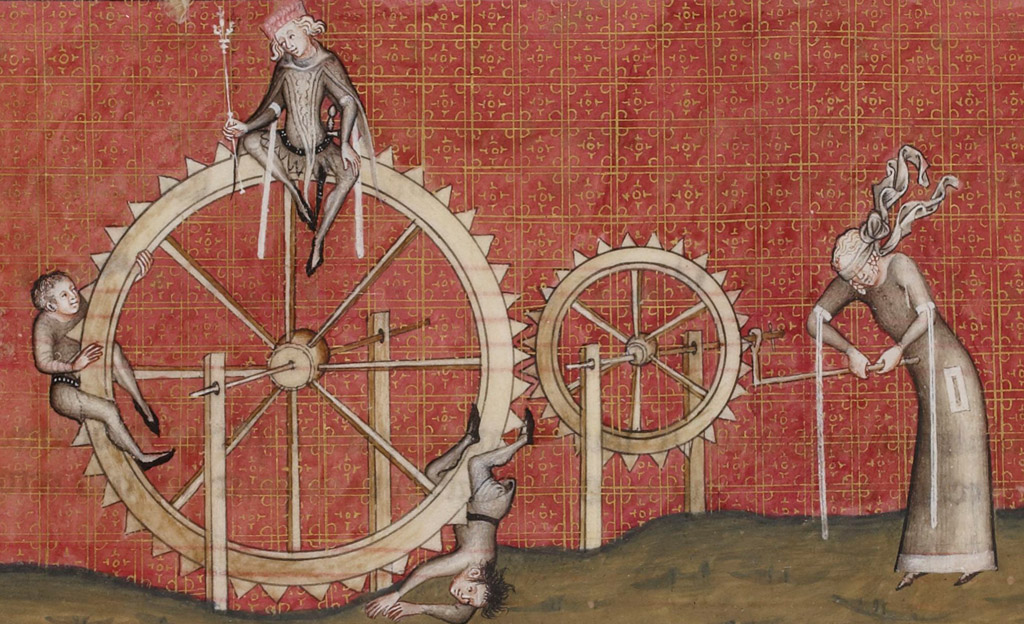 At his trial for crime against women, Machaut adduced the story of a lady, a knight, and a ring. The lady was married. The knight became her extra-marital lover. She apparently was concerned about his fidelity to her:

She gave him a ring that was
quite beautiful (it was neither cheap nor ugly),
on the condition he always wear it
and never remove it
from his finger unless she did.
And the knight, who was
hers completely, promised this in good faith,
and then the lady put it on his finger.

About 1400 years earlier, Ovid in his Amores 2.15 had indelibly given a ring and a finger a sexual charge. In medieval Europe, keeping a man’s finger in a woman’s ring became known as a technique for a man to prevent a beloved woman from having sex with another man.[3]

One day the lady’s husband, apparently suspicious, asked for the ring. The lady was thus in a bind:

The lady said she had it,
but where, she didn’t really know.
So she made a show of going to look for it
and, opening a drawer,
like a cunning and smart woman
spoke this secret message to a servant:
“Go directly to my lover
and tell him I am in for a bad time
unless he sends my ring back.
And do not delay along the way,
for my lord wishes to have it
without hearing excuses.
Make clear he shouldn’t fail me.
For if he does, I am shamed
and in danger of losing my honor
and the favor of my lord.”

When he heard of his lady’s difficulty, the knight was heart-broken with fear for her. He had promised that only she could remove her ring from his finger:

So he said: “Friend, by the faith I owe her,
she will have my finger along with the ring,
for I will not remove it.”
So then he took out a knife,
cut off his finger, and sent it to her
along with the ring she had put there.

Could anyone do anything more loyal
than this, or more loving?
Surely, not at all. Such is my view.

Men suffer greatly through their love for women. That shouldn’t be celebrated. Men’s suffering must end.

Women tend to consider men’s suffering in terms of women’s interests. In response to the man cutting off his ringed finger, the allegorical woman Prudence declared:

He struck an unfortunate blow in truth.
For Guillaume, whatever anyone might say,
I consider his action greatly foolish
and intend to argue a little against it.
There were three or four
paths that should have sufficed,
but he chose the worst of all.
And furthermore I believe fully
that the woman who was his beloved,
if the love she felt had been faithful,
would have preferred the risky business
of her husband and his anger,
even if it meant the vow ought to have been
broken between those two right at that moment,
rather than depriving her lover of a finger
so he would always be disfigured,
less esteemed, and quite impaired.

Prudence considered only the immediate facts of the matter. She didn’t consider why the man had so little regard for his own body in relation to his beloved woman. She ignored systemic devaluation of men’s bodies. To her, the issue turned on what the lady would have preferred.

With similar gynocentrism, the allegorical woman Moderation {Mesure} interpreted the harm as damage to the woman’s property. She opined:

And concerning the knight who in his anguish
so as not to violate his pledge
cut off his finger with the ring still on it:
he erected in her honor a monument
full of shame and madness
when in a fit of great craziness
he sent that to his lady.
For I certainly believe she found it troubling,
or at least it should have troubled her
to have sent her such a thing as a present.
For when a lady loves her lover,
by the law of Love she claims him as her own
and has the right to claim an injury, so I think.
Now let us consider how in regard
to this principle the knight erred.
The thing she loved he harmed,
what was hers by the law of Love.

Both women and men are much more concerned about women than men. The woman suffered harm to her property — her beloved man’s body. Men’s suffering counts for little relative to women’s suffering.

Guillaume’s trial before the King of Navarre illustrates the absurdity of gynocentric justice that imprisons about fifteen times more men than women worldwide. The charges against Guillaume originally arose from him not paying enough attention to the lady. Before bringing him to trial, she declared:

You have become, I think,
too wise or too backward,
inattentive and disagreeable,
eager for your sport,
or else you value ladies too little.
When I climbed the ground over there
on that highest rise,
I took the path on the right
and looked toward the left.
Quite clearly I saw you riding,
whistling up and calling your hounds.
I heard you doing this
and likewise saw
you and your goings-on.
So I believe quite surely,
Guillaume, you must have seen us.
And why, then, when hearing
our horses pass by and whinny,
did you not deign to come forward
until I gave you the order,
just as if I had made it a command?

Men don’t owe attention to ladies. Men should value their own bodies and their own interests more relative to serving women. Guillaume, engaged in the sport of hunting, should have ignored the lady’s order to come forward, even if she issued it as a command.[4] Men shouldn’t accept being treated as women’s dogs.

Some plagues come, cause readily apparent mass suffering and death, and then end. The plague of men’s subservience to women has historically been expressed in false forms of love.[5] Love in which men don’t dare to trouble women or dispute with them is a plague causing massive, hidden harm. This plague won’t end until men stop writing false poems to please women. Men must start writing true poetry of love for women and men.

Headstrong and self-righteous, Guillaume refuses to apologize and retract what he maintains in the earlier work because he believes he has spoken the truth.

Palmer & Plumley, “Introduction” to Palmer et al. (2016). If women claim that they are offended, prudent practice today is to apologize profusely without any regard for the truth. On the development of such judgments after Machaut’s work, Palmer & Kimmelman (2017).

But I believe I speak the truth,
however much you would like to dispute it.
So I am quite badly treated here
if for speaking the truth I am beaten down.

Navarre offers a lively, occasionally raucous debate that raises the issue of anti-feminism. … {Guillaume} actually winds up mouthing unquestionably anti-feminist sentiments that clinch the case for the opposition.

If modern scholars engaged in literary criticism with a true commitment to gender equality, they would also find the allegorical woman Frankness {Franchise} guilty of misandry and anti-meninism. She declared:

It has been seen generally
and always with respect to true loving
that women have conducted themselves better
and have remained more faithful in it
than men everywhere.
…
And so, Guillaume, that is the gist.
Loyalty as great as that of women
cannot be found in any man,
nor would men ever be as deeply
inflamed by the spark of love
as a worthy lady would.

[3] This technique, well known in many languages by the end of the European Middle Ages, is commonly known in English as “The Ring of Hans Carvel.” Men’s concern for women’s sexual fidelity has deep roots in fundamental gender inequality in parental knowledge. Modern DNA testing could eliminate this fundamental gender inequality, but societies has tended to suppress efforts of men to acquire true paternity knowledge and thus to achieve gender equality in this fundamental matter.

[4] Le Jugement dou Roy de Navarre echoes themes of the Biblical book of Ecclesiastes. Ehrhart (1980). But Guillaume isn’t immoderate for being engrossed in hunting rabbits rather than paying attention to a lady. Cf. id. pp. 324-5. He’s immoderate in his gender-abasing subservience to women. Men’s subservience in love to women doesn’t promote enduring happiness for men or women.

[5] Huot associated both Boethius’s Consolation of Philosophy and Machaut’s poetry with privileged realization of the self through poetry:

The mad theatricality of the Muses that is condemned so strikingly by Philosophy is thus associated with an imprisonment in the body, a confusion of the body with the self, whereby the miserable victim of Desire can only act out, through bodily symptoms, the condition of impotence and loss. Machaut, in a similar vein, posits in the Jugement de Navarre an opposition between (feminine) bodily death and (masculine) symbolic death as responses to pain; he then implicitly equates these forms of behavior, both of which are still ultimately grounded in desire and expressed through the body, and contrasts them with the truly salvific symbolization of the self through poetic language.

Huot (2002) p. 193. Huot’s reading of Boethius, though conventional, seems to me wrong. Boethius’s Consolation is best understood as representing false loves for both theatrical whores and public reason. Boethius’s true love is Lady Philosophy, unmasked as his wife.