Dominant authorities have long trivialized the castration culture deeply entrenched in Western civilization. Rather than listening to its victims, believing them, and expressing compassion for their sufferings, dominant authorities have long dismissed men’s penal fears as merely the psychological pathology “castration anxiety.” However, the recent sober documentary Mary Beard’s Shock of the Nude by the British Broadcasting Corporation (BBC) educated the public with seminally important investigative news reporting. That program included an exposé entitled “Mary Beard Peeks Beneath The Fig Leaf.” The coverup is over. No longer will leading institutions of public propaganda be able to dismiss placidly castration culture. 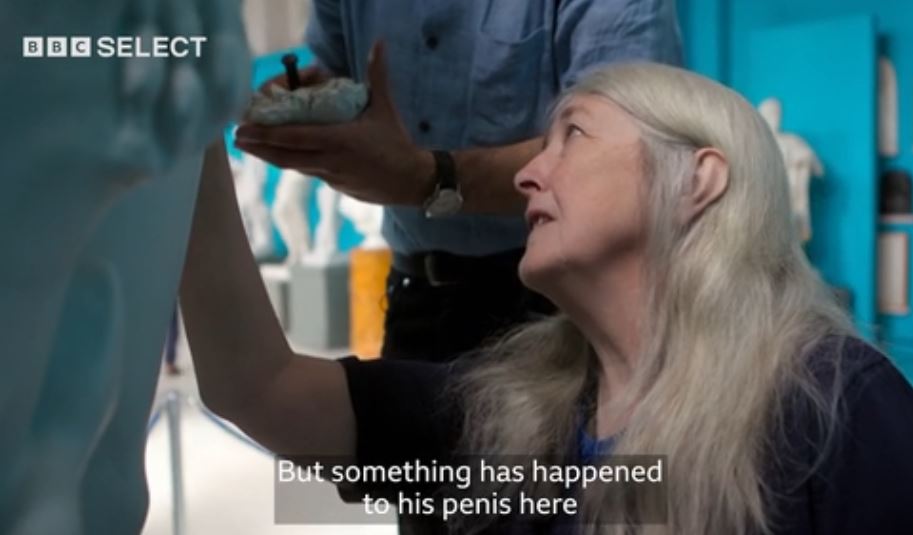 Every time he gets a glimpse of some traveler ahead — whether it’s a beautiful married woman or a marriageable young woman or a tender little boy — he immediately upsets his load and sometimes even throws off his pack-saddle and rushes madly at them. Then this lover with such high desire assaults these human beings and knocks them to the ground. Breathing hard, he attempts illicit and unspeakable lusts and urges upon these victims of his bestial desire a union in which the love goddess shows her backside. He even falsifies kissing by nudging and biting them with his nasty mouth. This business is going to cause us substantial lawsuits and quarrels, in my opinion, perhaps even criminal charges.

Within this claim of systematic raping, the rustic servant boy accused Lucius of a specific act of rape:

Just now he saw an honorable young woman. He threw off and scattered the wood he was carrying and made a furious assault on her. Our jovial lover here laid her out on the dirty ground and was making as if to mount her right there in front of everybody. If it hadn’t been for some travelers who heard the woman’s pleas and cries and came running up to help and snatched her from between his hoofs and freed her, the poor woman would have been trampled down and split apart. She herself would have suffered an excruciating end, and she would have bequeathed to us the death penalty for it.

Without a trial or even asking the donkey to respond to this charge, one herdsman proposed to kill him. But another proposed a more exploitative punishment:

“It’s wrong,” he said, “to kill such a beautiful donkey as that. By charging him with wantonness and debauchery you lose his work and services. But if you cut off his genitals, he will be completely unable to rise to the occasion but will relieve you of any fear of danger. Moreover he will become much stouter and heavier. I have seen it happen with lots of animals. Not just lazy donkeys, but even the wildest horses who suffered from such an excessive sexual drive that they turned savage and mad. After this detesticulation, they became tame and gentle, manageable for carrying packs and submissive in every other sort of service. So, if you are willing to follow my advice, just give me a bit of time to go to the nearest market, as I planned, and I can fetch from home the hardware I have ready to take care of this job. I can come back to you right away and take that savage and disagreeable lover of yours, spread his thighs apart, castrate him, and make him gentler than any castrated ram.”

The usefulness of castrated males within gynocentric society encourages castration. Limiting the exploitation of men helps to constrain castration culture. 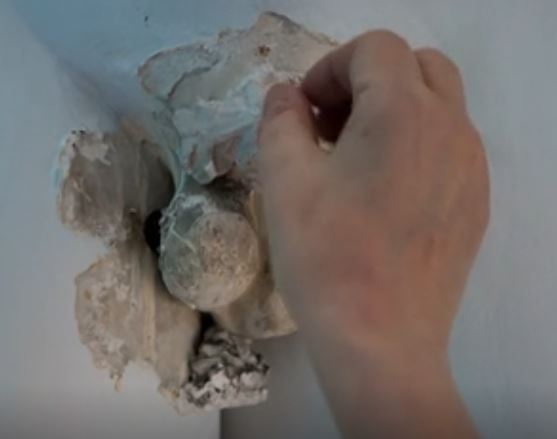 Lucius, even though transformed into a donkey, valued his genitals highly. In an ancient Greek predecessor to Apuleius’s Metamorphoses, Lucius declared:

I was already in tears at the immediate prospect of losing the manhood in my donkey’s body, I thought I didn’t wish to live any longer if I should become a eunuch. I therefore decided to starve myself to death from that moment or to throw myself from the mountain. Although from there hurled to a most miserable death, I could at least lie dead with my body whole and unmutilated.

Gynocentric society has long been complicit in castration culture. When another crime occurred, an anti-meninist mob again without any justification supported extra-judicial castration:

Definitely tomorrow you may gladly remove that despicable donkey’s genitals, and his head too. You will have no lack of assistance from these people here. 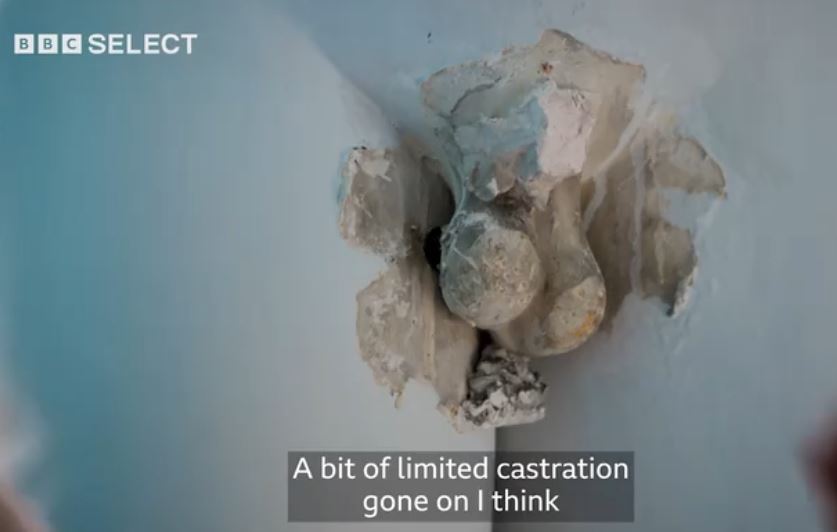 The views of classicist Mary Beard are trumpeted across the British public propaganda apparatus. The BBC has broadcasted “Mary Beard Peeks Beneath The Fig Leaf.” Since the BBC and Mary Beard have now uncovered castration culture, no one should be afraid of appearing to be an independent thinker in discussing castration culture. Women and men, long silenced about castration culture, can now speak out about its terrible history and enduring effects.

The BBC first broadcasted its two-episode documentary Mary Beard’s Shock of the Nude in early February, 2020. The publicity blurb for episode 1 declares:

In the first programme [of] her provocative two-part essay, classicist and broadcaster Mary Beard takes on the nude. As she says ‘There are an awful lot of naked bodies in western art, and they are often causing trouble even now.’ … For Mary, the nude stands on some of the deepest fault lines running through society, speaking to issues of men, women, gender and sex gender [sic], sex and moral transgression.

The public is thus taught that this is a shockingly important program. Exactly what a viewer is meant to learn from this program is then described more specifically:

Mary argues we mustn’t forget the edgy and dangerous nature of the nude – which is why it remains such a magnetic subject for artists and viewers alike – exploring in her words ‘how for so long men got away with it’.

Students, note how edgy and courageous it is for your professor to have you watch this BBC documentary during class time. Never forget “how for so long men got away with it.” What is it? Is it being slaughtered and sexually abused in wars, being subject to castration culture, having no reproductive rights whatsoever, or is it something else? Well, at least you can learn that a highly regarded classics scholar and BBC broadcaster supports your animosity towards men. You can get away with that.

The relationship between Christianity and sex, Beard reminds us, ‘has never been simple’.

Authorities have taught students that the relationship between sex and Christianity is simple: Christ teaches that incarnated love is very bad and should be avoided as much as possible. The uninstructed surely know better, particularly if they’re Christian or know any Christians. BBC authority Mary Beard thus rightly reminds us to have healthy skepticism toward authorities. However, according to Emma Park, apparently channeling anti-meninist Mary Beard, sex itself across all persons, cultures, and circumstances is simple:

Women’s bodies in most cultures have been in men’s control, one way or another, for most of human history.

Actually, it would be more reasonable to believe, “Men’s bodies in most cultures have been in women’s control, one way or another, for most of human history.” Consider who dies for whom, including in Du Fu’s eighth-century Chinese poem, “Song of the War Carts.” Given that women’s and men’s lives have always been intimately intertwined in all enduring human societies, one might suspect that who controls whom isn’t simple. But authorities and journalists refuse to acknowledge that complexity. Courageous gender truth-tellers have tried to disabuse the public of hateful myths, but gynocentrism and its supporters have largely silenced gender truth-tellers.

The above quotes from Apuleius’s Metamorphoses provide Latin passages and English translations (modified slightly based on my sense of the Latin passage and for ease of reading) from Hanson (1989). The quotes are from Book 7, sections 21 (Every time he gets a glimpse…; Just now he saw…) and 28 (Definitely tomorrow…).

The quote from the Greek predecessor to Apuleius’s Metamorphoses is from Lucius or the Ass {Λουκιοσ η Ονοσ}, also known as The Ass {Ονοσ / Onos / Asinus}, section 33, ancient Greek text and English translation (modified slightly) from MacLeod (1967). Λουκιοσ η Ονοσ, traditionally attributed to Lucian of Samosata, was probably written in the second century before Apuleius wrote his Metamorphoses. Metamorphoses 7.24 parallels this passage from Λουκιοσ η Ονοσ, but is slightly less detailed. For help in reading the Greek of Λουκιοσ η Ονοσ and some parallel passages from Metamorphoses, Hayes & Nimis (2012).

The language of Apuleius’s Metamorphoses is generally more extravagant than that of Λουκιοσ η Ονοσ. For example, in Metamorphoses 7.22, Lucius the donkey, falsely accused of rape, is smeared as “that public husband {publicus iste maritus}” and an “all-community adulterer {communis omnis adulter}.” Public, in the sense of being open to all, has long been a figure of sexual promiscuity and adultery among humans. For example, Théodore de Bèze, who became the spiritual leader of the Calvinists late in the sixteenth century, warned Ligurinus that his wife was regarded as public property:

That city officer, Ligurinus, whom
you discovered naked with your wife,
wasn’t doing anything, I swear, except his official duty.
He wanted to evict you from public property.

[images] (1-3) Mary Beard examines and gropes the genitals of a nude male sculpture (a plaster cast of the Apollo Belvedere) in Cork’s Crawford Art Gallery after a museum curator removed a fig leaf covering the man’s genitals. Still images from BBC Select except of BBC documentary Mary Beard’s Shock of the Nude, episode 1. (4) BBC Select excerpt from Mary Beard’s Shock of the Nude, episode 1. Sourced via YouTube. This BBC Select excerpt is entitled “Mary Beard Peeks Beneath The Fig Leaf” / “What you find when you remove a fig leaf.” Its publicity blurb begins, “Christianity and sex have always had a conflicted relationship.” But Mary Beard says it’s not simple.