My sources deep within the World Bank have leaked some explosive analysis by Greg Kisunko, Steve Knack and Colum Garrity of the World Bank’s Public Sector Governance Group. This isn’t just about small candy. It’s a revelation way, way, way bigger than the Halloween Documents. If this project gets canceled, and the analysis seems to suggest that it will be, the earth is going to shake and all parents will wish they had been barren. 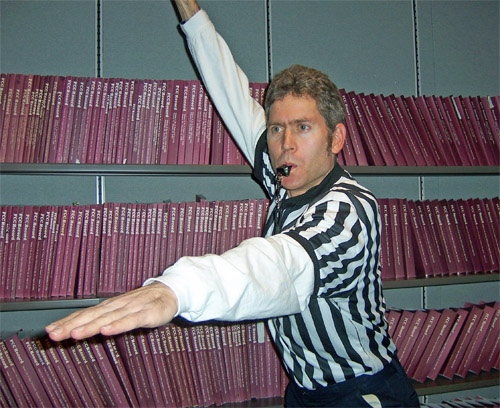 Developing good social networking technology requires thinking about distributing computing between humans and computers. Way back in 2002, a human-computer interface designer discussed some problems with the then-trendy idea of context-aware computing:

I suggest rather than trying to take humans out of the control loop, we keep them in the loop. Computational systems are good at gathering and aggregating data; humans are good at recognizing contexts and determining what is appropriate. Let each do what each is good at.
[Erickson (2002) p. 103]

Recognizing and respecting comparative advantage between humans and computers is also a good design principle for social networking technology.

Social networking technology that depends on a computer having better (human) social intelligence than a human challenges the designs of both. Consider a social networking application for a mobile phone called a Jerk-O-Meter. It measures the user’s voice activity and voice stress. Using these data, the application evaluates the user’s communicative performance and delivers these messages:

Another application, called Wingman3G, measures speaking time, voice rate, and vocal stress. It evaluates this data using a model of successful dating communication and produces real-time messages such as:

1) “Everyone sees the same thing; no user customization”
2) “Portray actions, not interpretation”
3) “Social proxies should allow deception”
4) “Support micro/macro readings”
5) “Ambiguity is useful: suggest rather than inform”
6) “Use a third-person point of view”
[see Erickson (2006), pp. 13-4, which describes these claims in more detail]

Claims 1) and 6) suggest designing social proxies to be like objects in our one, real world. Claims 2)-5) point to the comparative advantage of human social intelligence in human social interactions.

Understanding how to advance liberal democracy is crucial to the welfare of persons around the world. In Russia in 1906, a decree of the tsar gave peasants living in agricultural communes an opportunity to establish individual land titles and to consolidate their land plots. In Liberal Reform in an Illiberal Regime, Stephen F. Williams analyzes the socio-economic circumstances of this land reform, its legal structure, and its consequences.

This book is a testament to the power of individual enterprise and a model of scholarship in the public interest. Williams is an independent scholar with a highly important day job that does not require him to compete for academic prestige. In the preface to his book, Williams explains that when the Soviet Union fell in December, 1991, he wondered what precedents existed for market-oriented reform in Russia. He recalled Petr Stolypin’s agrarian reforms:

Looking around to get a clearer idea of what these reforms amounted to, I found a wealth of scholarly material. But I found neither a summary account of the story, aimed at the intelligent citizen with an interest in property rights and the development of liberal democracy, nor any sustained application of the fundamental insights of the modern law-and-economics movement. Thus this book.

Thus Williams did an enormous amount of unpaid scholarly work to produce this book.

If you want a solid understanding of land reform in Russia from 1906 to 1915, read this book. The Stolypin land reform has been at the center of contentious debates about the nature of Russia and its future. The author synthesizes an enormous body of both English and Russian-language work concerning these reforms. He carefully analyzes possibilities for individual transactions and consequences of different macro-structures of these transaction possibilities. The author does not tell a dramatic story about the reforms; rather, he works toward an objective, reasoned analysis of what actually happened.

If you want a resource for thinking about re-arranging economic rights to further liberal democracy, read this book. Even in regimes of highly concentrated authority, changes in rights enacted from above can have dramatic effects:

Once perpetual intellectual property was ended in England in 1774 [in Donaldson v. Beckett, a decision of the House of Lords], and Shakespeare was sold in conditions of economic competition, the effects were dramatic. The number of editions rose sharply, print runs lengthened, and minimum prices fell. It had taken nearly 200 years for the minimum price of access to a Shakespeare play to fall back to what it had been in Shakespeare’s day. When we add in the anthologies, the abridgements, the sale in parts, the inclusion in school books, and all the other innovations of the post-1774 public domain, we can say that, by about 1800, Shakespeare at last became available to readers of all classes and ages. [1]

Similarly, shifts from granting to individual companies exclusive rights to control use of a band of radio spectrum to radio regulation that authorizes broad classes of users has fostered enormous expansion in use of wireless devices.

These changes in copyright and radio regulation curtailed types of individual economic rights, while Stolypin’s reform increased a type of individual economic rights. Public discussion of this schematic difference tends to be polarized between idyllic descriptions of social production on the commune under Brezhnev (“joys of zastoy”), and inspiring proclamations that rags-to-riches success, progress, and economic evolution depend on fierce, every-woman-for-herself combat for individual goods in the human jungle. That sort of discussion, as valuable as it may be, is not a sufficient basis for good public policy. Understanding how Stolypin’s reform actually worked provides insights into practical issues relevant to any type of re-arrangement of economic rights across a large population.

Article 50 of the 1910 Act said, as had prior Interior Ministry circulars, that alienation of allotment land that had become personal property could be effected only in accordance with the system established by the Emancipation. This prevented sale, mortgage, or gift to anyone not a member of the peasant estate, or the enforcement of the owner’s personal debts (by any non-peasant creditor) against the owner’s interest in the land. (p. 221)

Outsiders are likely to be powerful agents of change. In particular, organizations in agricultural supply and services, and agricultural processing and marketing are powerful forces for changes in land ownership, including moving land into and out of farming use. Such organizations were underdeveloped in subsequent Soviet agriculture. [2]

Why did Stolypin restrict land transaction to transactions among peasants? Williams observes:

Stolypin’s speeches in defense of these restrictions were strikingly defective. In his other speeches on the reforms in the Duma or state council, he generally marshaled fact and analysis to make a case that the consequences of his proposals would be desirable and those of his adversaries undesirable. But when it came to the restrictions on allotment lands, he was reduced to a kind of semantic conjuring trick. (p. 221)

Not restricting land exchanges to peasants would make agrarian reform more difficult to describe and predict. Whether for reform or revolution, political proposals typically require describing intentional change and negotiating among established interests. Because economic flexibility and dynamism don’t have specific appeal to established interests, their value is difficult to incorporate in practical re-arrangements of economic rights. The boundaries of Stolypin’s land reform, and his poor justification for them, point to important general issues in re-arranging economic rights.[3]

Administrative capabilities are an important constraint on re-arrangements of economic rights. Assigning meaningful individual land titles requires land surveying. Williams notes that Russian had almost no land surveyors before the start of the reform. Nearly 7,000 persons became surveyors in the course of the reform (p. 158). Nonetheless, more than 60% of the applications for land consolations remained uncompleted when World War I effectively stopped the land reform. (p. 158). Property rights depend on good government administration. Property rights are not effectively established merely by legal decree.[4]

Example is a powerful motivation for re-arrangement of economic rights. Williams finds provinces with a relatively high level of pre-reform hereditary tenure and land consolidation had a higher fraction of households seeking individual title and land consolidation under the Stolypin reform (p. 172-3). Humans have a natural propensity to compare their situation to that of others, and ask, “Why not us?” That sort of question probably played a key role in motivating the large-scale re-arrangement of economic rights in Central and Eastern Europe at the end of the twentieth century.

Ideas have important connections to property rights. Williams includes a poignant quotation from a peasant in a Soviet prison (pp. 1-2). Under the Stolypin reform, this peasant had gotten rich. The peasant explained his success thus:

I worked hard, but to tell the truth, got little from it. I wasn’t able to manage. As least not until the Stolypin booklet fell into my hands. Perhaps he didn’t write it, but that’s what they called it. There it was explained how one needs to manage. And when I applied what was written there to my land, I got rich directly.

In other words, he got rich on his individually owned plot not through hard work but by following authoritative instructions. The Soviet authorities then confiscated most of his land and “threw me out into the forest.” That was not the end of the story:

They took away everything, but I brought my Stolypin booklet. And then years passed, and again I did things according to Stolypin, and again I was rich — not rich, but well enough off.

Farming by the booklet is a wholly implausible cause of success. The peasant seems to invoke the Stolypin booklet as justification for his success, which was not secure:

Changing ideas of social value has to occur in conjunction with re-arranging economic rights to make those rights secure.

Property rights reform requires good law and effective administration. The great writer offering to society the big idea has casts a long shadow over the past two centuries of Russian history. Big ideas are no substitute for careful analysis of circumstances, practical proposals, and detailed evaluation of consequences. Liberal Reform in an Illiberal Regime is an impressive example of serious policy analysis.

Liberal Reform in an Illiberal Regime also is a pioneering work of independent scholarship. As such, its greatest flaw is that it is not freely available on the Internet for all to appreciate and study. Many persons around the world who might find this work inspiring and useful are likely to have difficulty gaining access to it. Like Stolypin’s agrarian reform, this work respects, with little deliberative justification, established class boundaries. Made freely available to all, it would have made a much bigger contribution to understanding how to re-organize economic rights in a way consistent with liberal democracy.

[2] See Galbi, Douglas (1994), The Significance of Credits and Subsidies in Russian Agriculture, Table 4.

[3] Telecommunications policy has similarly suffered from lack of appreciation for the possible scope of change. See Galbi, Douglas (2000), Transforming the Structure of Network Interconnection and Transport, Section II.A.2.

[4] Auctions of rights to control use of radio spectrum has tended to proceed under the assumption that administrative assignment of rights is sufficient to establish secure rights. No provision is typically made for an independent institution to adjudicate publicly interference disputes. In practice, almost no interference disputes are publicly adjudicated, and virtually no case law defines relevant precedents and decision rules. See Galbi, Douglas (2006), “rights to communicate using radio spectrum,” post on purplemotes.net. 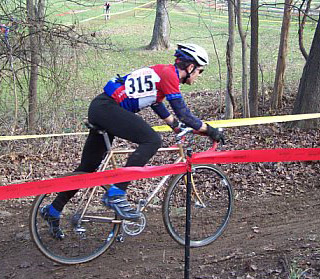 (Thanks to Rob Dolan for photo)