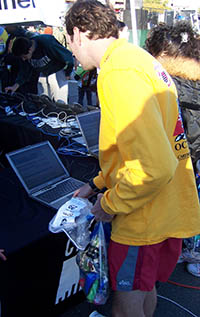 All the runners were tracked in real-time:

Get split times and finish information instantly on a pager, text messaging number or e-mail. This free service is a great way for spectators to cheer for their runner (or runners) and be there to meet them for the celebration at the finish line. Live split locations will be at the 5mile, 10 mile, 13.1 mile, 15 mile, 20 mile, 23.5 mile and the finish points.

Tents with notebook computers offered race spectators access to the service. The laptop interface presented not just split times, places, and pace, but also a graphical course map with a symbol indicating the runners estimated current position. I would guess that this was a must-have service for many fans who vigorously cheered their special runners.

After the race, RunPix generated runner-specific data graphs off the underlying runner-times database. 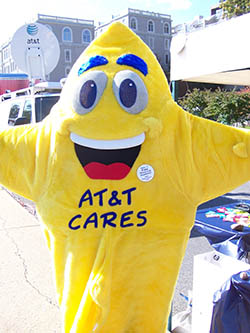 AT&T at&t offered free phone call to anywhere in the world on about 10 portable phones. Spectators didn’t seem to be using the phones much, but runners who had finished the marathon later crowded the phones. I would guess that a lot of persons didn’t want to carry a cell phone while running the marathon. They probably used the at&t phones to contact friends and family lost in the huge crowd at the event. 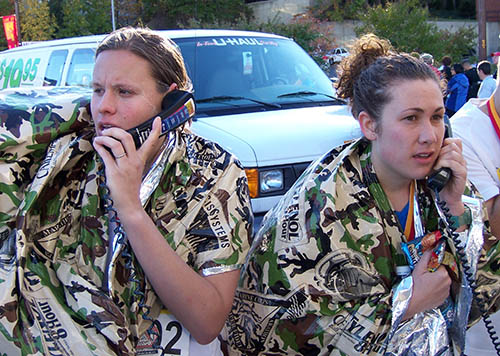 Free photos were offered in surprising ways. Tylenol (pain reliever) would take your picture and print out a small copy for you on a Tylenol ad card. The ad card included instructions for accessing a larger copy of the photo on the web (try batch # TYVA 11, photo # 0115). You could access the photo after filling out a short (six question) survey about your use of pain relievers. Saturn (car company) was also doing free photos. The Saturn photographers handed out a small plastic bar-coded card with a code for accessing your picture online (try photo id# A9HA4 4PRT3). Saturn offered no immediate print-out of the photo. Both the Tylenol and Saturn service asked for name and email address to access the photos on the web. The Tylenol service allowed browsing of other persons’ photos, while the Saturn service did not.

CNN featured some retro-tech in its CNN=Politics display. They erected a paper-based graffiti board as well as a refrigerator-magnet board. They also provide round paper button templates where you could fill in “I’m Pro (blank)” or “I’m Anti (blank).” You could stick these on the refrigerator board. CNN also had a machine that could make a button for you on the spot. My sense is that the CNN approach was unsuccessful. Perhaps the crowd at “the people’s marathon” was too parochial and lacked the political sophistication that CNN offers.