YouTube, which was launched in November, 2005, now generates about 10% of broadband subscribers’ Internet traffic in North America (Ellacoya findings).

Video attracts much more attention than print. Historically, persons have spent on average relatively little leisure time reading. Most of the growth in leisure time from 1925 to the present has been absorbed in watching television. Now persons have on-demand access to large, diverse collections of videos, similar to what they have had for books. 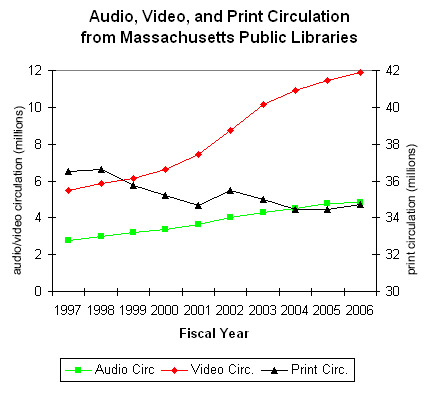 [1] Data from Massachusetts Board of Library Commissioners, Public Library Data, Summary Report 2006, p. 29. This is also the source for the above graph.

3 thoughts on “print down slightly, video up sharply”