Portraiture can be used to bring a person into a painted narrative, to provide information about a person, and to generate a sense of presence of a person. Mughal portraiture indicates the importance of these different purposes. 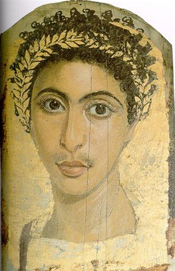 A frontal view of a face, where the face is a large feature of the painting and the eyes of the face gaze out directly at the viewer, effectively creates a sense of presence. Some coffins in Roman-occupied Egypt about 2000 years ago included portraits of the deceased (Fayum mummy portraits). These portraits were not intended to identify who was in the coffin. Persons concerned about the deceased undoubtedly knew who the deceased was. Nor did such portraits contribute significantly to the story. Death is a regular episode in every human life. The value of the portraits is best understood in terms of presence. The portraits brought the presence of the dead to life.

The Mughals did not design portraits to create a sense of presence of a person. Existing Mughal portraits never depict a face where it is a large feature of the painting and the eyes of the face gaze directly out at the viewer. When Jesuit missionaries brought a painting of Mary, the mother of Jesus, to the Mughal ruler Akbar’s court, it attracted great interest.  That Byzantine-style painting was designed, like the mummy portraits, to create a sense of presence of Mary.  For the Mughals, the effect was probably unprecedented.

Mughal portraiture used three-quarter and profile views of faces. The three-quarter view was associated with action-oriented, narrative paintings. These paintings were relatively common under Akbar. The three-quarter view of a face helps indicate the three-dimensional space of narrative action. The profile view is associated with individual, static portraits and with documenting the presence of particular individuals within scenes. These types of paintings were relatively common in the albums assembled in the reins of Akbar’s successors Jahangir and Jahan. The profile view probably provides the most economic means to identify painted persons. [*] Thus the three-quarter and profile views of faces support narrative and informative alternatives to presence as communicative models for portraiture. 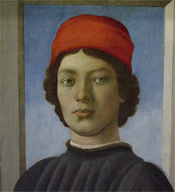 Id. p. 166 states, “If one wishes to produce the most accurate and hence most identifiable record of a figure’s face, then it is, of course, a side view that must be used, for it is only through the profile that the exact outline of the nose, mouth, and chin can be recorded, and silhouetting the figure against a plain-colored ground, usually light or dark green, highlights the whole form but especially the profile of the figure [notes omitted].” This is an overstatement. Several decades of psychology experiments indicates that the three-quarter view best serves human identification of faces, but some recent evidence favors a frontal view. See, e.g. Stephan and Caine (2007) and Turati, Bulf, and Simion (2006). Roughly a three-quarter view of faces best serves machine-programmed recognition of faces (Liu, Rittscher and Chen (2006)). Processing of images of irises, which are best seen in the frontal view of a face, seems to have been important in the evolution of humans and is likely to dominate future machine-programmed identification systems. The advantage of the profile view needs to be understood with respect to the cost of painted identification. Even if frontal-view portraits can provide better identification of a person, a satisfactory profile view is probably easier to paint.

Stephan B C M, Caine D, 2007, “What is in a view? The role of featural information in the recognition of unfamiliar faces across viewpoint transformation” Perception 36(2) 189 – 198.