In the next 10 years, the whole world of media, communications and advertising are going to be turned upside down — my opinion. 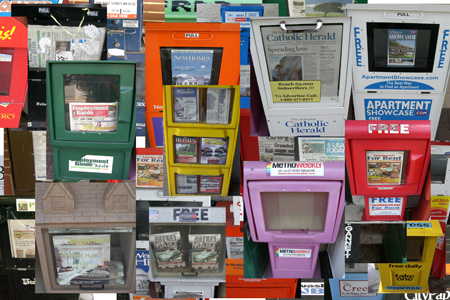 IP networks aren’t competitive with newspaper boxes. Perhaps some time in the future networked news boxes will advertise content and provide means for downloading it to portable reading devices that everyone carries. There are many, many obstacles for such a development. It’s unlikely to happen even in twenty years.

General-coverage print newspapers that persons pay to buy probably will disappear within a decade. Such publications already are a minority among those offered through newspaper boxes. Unless cities ban newspaper boxes, newspaper boxes and the print media they contain are likely to continue to exist for decades.

[1] Postful insightfully observes that all content is already aggregated and distributed digitally and is only pushed to print for output.

[2] Here’s a list of the individual publications, along with some additional information about them.

[3] In Lakewood v. Plain Dealer Publishing Co., 486 U.S. 750 (1988), the U.S. Supreme Court overruled a city ordinance that gave the city’s mayor wide discretion to determine what publications were allowed in newspaper boxes. In City of Cincinnati v. Discovery Network, Inc., et al., 507 U.S. 410 (1993), the Supreme Court declared that a selective and categorical ban on “commercial handbills” was unconstitutional. Practical challenges to establishing new newspaper boxes and maintaining existing ones are significant. Some cities are pondering new regulations for newspaper boxes while publishers are fighting strongly against restrictions.

One thought on “print fills the streets”