Most information directed to the general public doesn’t have immediate personal relevance to anyone. Adopting a style of seriousness, objectivity, and public importance helps makes lack of personal interest into a selling proposition. The news is what actually interests no one, but what everyone should know.

The form of the news has significant costs.  Think of a story about a school bus that has skidded off the road, tipped over, and killed three school children in a far-away town.  Or a front-page story in a U.S. newspaper about women dying in childbirth in Sierra Leone, a country in which the average lifespan of women is forty-three years, and that of men, three years less. Greater available of personal, narrow, immediate information channels is likely to make news like these examples seem less serious, less objective, and less important. Put differently, the news loses value as personal communication capabilities increase.

Early news provides insight into this effect.  Consider Newes from Rome, Spaine, Palermo, Geneva, and France, … translated out of Italian and French into English.  This was the title of an sixteen-page news pamphlet printed in London in 1590.  This publication wasn’t part of a time-structured series of publications. However, the first news periodical printed in England, which appeared about thirty years later, had a similar title and content: Corante, or Newes from Italy, Germany, Hungarie, Spaine, and France (1621).  Both publications offered information about high-level, foreign, political and military events to a general domestic audience.[1]

It is credibly reported by Letters from Chiavenna that there was one of the Famelie of Lucemburge, a Papist by profession, and yet a servaunt to the French King, passed through Chiavenna, with three score horse, and staied there one day.

This sentence is quite similar to today’s news: note the citation of an informed (anonymous) source, description of party allegiances, and detailed reporting of current events.  The report goes on to describe the traveler, who is a representative of the French nobility, meeting with the Pope and requesting that the Pope recognize Henry of the Bourbons, King of Navarre, as King of France.  Just two years earlier (1588), the Spanish Armada, with the active support of the Pope, had sought to conquer England.  It had been defeated just off the coast of England.  Subsequently, England, supporting the French Protestant Huegenots, and Spain, supporting the French Catholics, engaged in political and military battles by proxy in the civil war in France.  An attempt to gain recognition for Henry, then a Huegenot, as King of France, was thus a matter of high politics for England at that time. 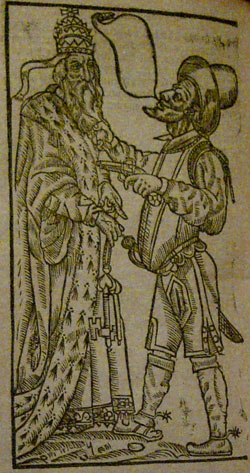 The Newes then quickly moves to a rather different type of event.  The narrative transition is formally temporal but substantively absurd: “soon after the departure of this [emissary to the Pope],” three pictures were set up at a monument in Rome called the Pasquin.  The Newes provides a woodcut of each of these pictures, additional details about each picture (all had a common theme), and an account of the reactions in Rome to them.  Consider the first picture:

the Pope set out gorgioustie in his Robes and triple Crowne:and a straunger holding him by the beard, with a dagger set close to his brest pronouncing this sentence unto him: viz,
Redde Rationem villicationis tuae {Give an account of your stewardship}

The Newes then reports:

Which being seene to the Common people made them greatlye to murmur and bee of frindly [?] imaginations.  Some were of this opinion, that it pretended the murdering of the Pope, or some treason to his holinesse: others imagined, that it prophesied the fall of the Popes kindome, and alteration of the Antichristian Religion and state of Rome, and others supposed it to bee done only [?] in the derision thereof.  Whereuppon some favourer of Christian Religion in the Cittie of Rome, that durst not openly be knowen, wrotte certaine verses uppon eyther of those several Pictures: and after scattered them in the streetes of Rome, where soone after speedy searche was made for the Author of them, but he coulde not by any meanes be found out.

The Newes prints the verses that it reported to be written on the pictures.  The verses are, respectively, stanzas of 13, 16, and 20 lines, in English, and of quite regular iambic hexameter and iambic pentameter.

The Newes makes news  — serious, objective, and publicly important information — from events that had a much different character.  Pictures set up at the Pasquin in Rome were known as pasquinades.  They were anonymous, popular lampoons of the Pope or high church officials.  Rough and vulgar, expressing strong opinions, they probably had as much importance to public officials as blogs do today.  Anyone who dared could post pasquinades, those who did probably were intensely interested in what they wrote, and most persons in Rome probably considered pasquinades to be mainly amusing and not particularly serious.  Pasquinades were not news.

By itself, one of the pictures may have been an early form of interactive media significantly different from the Newes and traditional news today.  The picture of the man pressing a dagger to the Pope’s breast included an empty speech bubble. The empty speech bubble invited persons to add their own annotation to the picture, like persons can now do to videos on Nico Nico Douga and YouTube.  Most of the fun of annotating is displaying the annotated work to others.  As a single-sheet woodcut, the picture had the form of a poster. As part of the Newes, it was a page in a multi-page pamphlet.  A single sheet favors annotating and posting much more than does a page in a pamphlet.

The Newes probably fabricated most of the information that it transformed into news.  That anyone would write about fifteen lines of verse on a pasquinade is unlikely.  That translation of such verse from Italian into English would have regular, conventional English prosody is ridiculous.  The phrase “Redde Rationem villicationis tuae” (give me an account of your stewardship) is from Luke 16:2. But its popular significance almost surely is English. That phrase is the title of a fourteenth-century sermon delivered in London and reprinted repeatedly in sixteenth-century England to provide historical support for English Protestant polemic. Projecting that phrase into foreign circumstances makes it seem less polemical and more objective.[2]

The Newes is serious, objective, and publicly important only to persons who are distant in interest and poor in personal communication channels.  If Romans who had posted pasquinades had read the Newes, they probably would have laughed. That’s likely to become a more common reaction to traditional news with the growth of the Internet.

[1] Newes from Rome, Spaine, Palermo, Genevae, and France (1590) is available in Early English Books Online.  An instance is on display at the Folger Shakespeare Library in the exhibition, Breaking News: Renaissance Journalism and the Birth of the Newspaper (through Jan. 31, 2009).  For examples of early British newspapers, see Concise History of British Newspapers in the Seventeenth Century.  A brief early history is here (MS Word document).

[2] Thomas Wimbledon delivered a sermon on the text “redde rationem villicationis tuae” from the famous outdoor pulpit at Paul’s Cross in London about 1387. From 1541 to 1635, this sermon was frequently reprinted under that title.  Twenty separate imprints survive from that period, including at least four imprints in the 1570s.  See Alexandra Walsham, “Inventing the Lollard Past: The Afterlife of a Medieval Sermon in Early Modern England,” The Journal of Ecclesiastical History (2007), 58 : 628-655. The catalog for the Folger exhibition suggests that the woodcut originally circulated in Rome with the caption “redde rationem villicationis tuae.”  See Kyle, Chris and Peacey, Jason (2008), Breaking News: Renaissance Journalism and the Birth of the Newspaper, description of catalog item 14.  That seems to me highly unlikely.