Twelfth Night, a Shakespearean popular favorite, brings happiness to everyone except a most austere Puritan.  The Shakespeare Theatre Company’s production of Twelfth Night delivers laughter, fine acting, and beautiful poetry on its way to the concluding three marriages.  That a person carried along in this drama might be left with a vague awareness of more doesn’t subtract from its pleasure.

In the second scene, Viola, ashore after a ship-wreck, converses with the ship’s captain. Director Rebecca Bayla Taichman chose not to have other sailors with the captain. Consistent with that choice, Viola (Samantha Soule) and the captain (Todd Scofield) meet each other as friends.  This relation contrasts effectively with the social formality of the preceding court scene.  This scene, however, could have indicated shipmates’ struggles both against the sea and for oneself amidst the sinking crowd.  It could have highlighted an exchange between a mercenary captain and a shrewdly manipulative Viola. But this Twelfth Night prioritizes inner structures over outer ones. 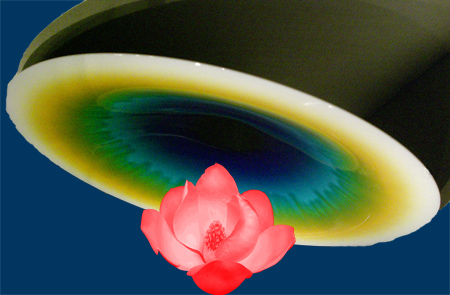 The set and various metatheatrical gestures suggest an enveloping psychological drama.  Set Designer Riccardo Hernandez has filled the stage with a gleaming, cresting wave that sweeps up a stone edifice. The wave and the acting space as a whole are enclosed on three sides with flat panels painted with huge, red roses on a black background.  These roses, Taichman mentioned in a panel discussion, came to her in a dream.  To accent particular emotions, rose petals waft down from above or tango dancers appear, move across the set, and disappear.  Highlighting the fictionality of the action, Sir Andrew at one point admonishes the orchestra to quell its dueling music, and Malvolio breaks the story-world to brush off the “hidden” group watching him respond to the letter that he thinks is from Olivia.  In the concluding scene, Viola/Cesario visibly suppresses laughter at the entrance of the disheveled and distraught Malvolio.  Fabian remarks of the plot against Malvolio, “If this were play’d upon a stage now, I could condemn it as an improbable fiction.”  Twelfth Night as a whole is an improbable fiction. From its brief, beginning image of Viola hanging upside-down high in black space, this production suggests that the drama is really psychological.

Veanne Cox brilliantly projects Olivia’s inward turmoil.  My favorite moment in her acting was at the end of Act I.  Having fallen in love with Orsino’s messenger Cesario, Olivia soliloquizes, “Even so quickly may one catch the plague?”  She ominously draws out the “g” in “plague.”  Then, three lines later, she triumphantly and madly decrees, “let it be!”  A plague in London in 1593 closed all the theaters and killed perhaps 10,000 persons.  When Twelfth Night was first performed about 1601, the plague remained a real and constant fear.  Low characters call for plagues indiscriminately: “A plague o’ these pickle-herring!”  For Countess Olivia, only a supreme love could be figured so finely with the horror of plague.

This production obscures the imaginative relation between Maria and Olivia.  Nancy Robinette, who is not short, plays Maria, who in various ways is described as short. This minor issue of physical stature is easily finessed. A major issue, at least according to one sadly neglected but profoundly insightful analysis, is Maria’s conceptual size. Cesario’s meeting with Olivia is effected by Olivia saying to Malvolio, “Let him approach. Call in my gentlewoman.”  Malvolio exits, Maria enters, and then Cesario enters.  Cesario then queries, “The honorable lady of the house, which is she?” Like many other editors and directors, Taichman blunts Cesario’s doubling of Maria and Olivia by adding three other attendants to the tableau that Cesario sees. No textual warrant exists for these attendants.  More importantly, Cesario’s inability to distinguish between Maria and Olivia is a crucial, status-shaking starting point for these two characters divergent trajectories in the conceptual space of will and epiphany.  Maria continually asserts her will to increasingly vicious ends.  She receives no place in the final scene. Olivia, broken in sorrow, becomes in the end the fool’s “good madonna.”  That is a figure of psychological drama quieted and emptied, replaced with a personalized but cosmic order.

Washington, D.C. playgoers know that Floyd King rules as a fool.  He’s in fine fooling in this production.  Rich Foucheux plays a funny but narrow Sir Toby.  Tom Story delivers a brilliant, rollicking, outlandish Sir Andrew.  He repeatedly drew audible responses from the audience.  King’s fool makes good fun with both of them, as well as with Ted van Griethuysen in the role of Malvolio.  The fool connects different scenes and contrasting characters in a way that complements the concluding marriages.  Despite being a raspy, floppy fool, King sings clearly and beautifully.  If it turns out that he is also a strong dancer, the Shakespeare Theatre Company should fear that he might head off to New York to seek a more lucrative career in Broadway musicals.

In this production, the madness of love seems to be not much more than the typical cases of a urban psychotherapist.  The matches that end the play are unpropitious for enduring, healthful, joyful love.  Characters jump each other with a groping, desperately kissing love that reminds me of high school.  Orsino disrobes Viola/Cesario with a boy’s wrap-top fantasy (yup, I’ve thought of it).  One might say that they are adults regressing.  But most persons consider psychoanalysis to be at best an odd form of story-comfort and at worst an absurd fraud.  Floyd King exquisitely times a closing gesture for the fool, a gesture that echoes similar gestures throughout the play.  Sometimes a meal is just a meal.  Interests and desires, however, may not always be this small.

The Shakespeare Theatre Company’s Twelfth Night displays the restless heart in everyone.  It makes for a fine night’s entertainment.

Twelfth Night by William Shakespeare, directed by Rebecca Bayla Taichman, is playing at the Shakespeare Theatre Company’s Sidney Harmon Hall from December 2, 2008 to January 4, 2009. The production, which the McCarter Theater is co-sponsoring, will be performed in Princeton, New Jersey, at the Matthews Theater from March 9 to March 29, 2009.  This review is based on the performance on December 5.

One thought on “psychodrama: Twelfth Night at the Shakespeare Theatre”