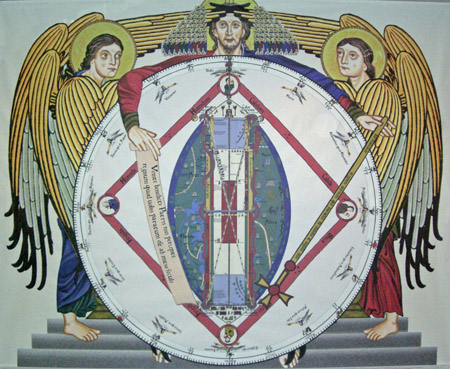 To prepare for lectures he gave about 880 years ago, Hugh of Saint Victor painted an extraordinarily intricate, multi-color teaching aid on the wall of the Abbey of Saint Victor in Paris.  The painting was probably about 4 meters tall and 4.5 meters wide.  It was “the most complex single work of figural art from the entire Middle Ages.”  Called the Mystic Ark, it placed a neo-platonic macrocosm / microcosm into a God-centered understanding of creation.  Unfortunately, neither the painting nor any copy or drawing of it has survived.

With years of research and painstaking effort, Conrad Rudolph, professor of medieval art history at the University of California, Riverside, has visually reconstructed the Mystic Ark.  Rudolph synthesized the textual description with relevant images that have survived from the period, place, and culture of the text:

Rudolph digitally reconstructed the painting using hundreds of individual images from a contemporary work of art, images that range from signs of the zodiac, celestial choirs and a map of the inhabited world to the biblical stories of the Exodus and the Ark of Noah, the arrival of Jesus Christ, and the Last Judgment. The stylistically consistent images were then painstakingly recombined digitally – cut up, flipped, altered, joined – over a period of nearly eight years… . [UCR Newsroom]

The U.S. National Gallery of Art commissioned a full-sized, digital printing of the Rudolph’s reconstruction. The print was first displayed on December 14, 2008 for Rudolph’s lecture at the National Gallery.  I attended that lecture and took a picture of the reconstructed Mystic Ark with my portable digital camera. That copy is displayed at the top of this post (a better, higher-resolution image, courtesy of Professor Rudolph, is here).

[1] The statements in this and the previous paragraphs have in the past been a matter of considerable scholarly debate. I assert them based on Conrad Rudolph’s convincing recent arguments in his ongoing work on the Mystic Ark. He described his work in two recent lectures at the U.S. National Gallery of Art: on December 14, 2008, “Time, Space, and the Progress of History in the Medieval Map”; and on December, 15, 2008, ” “Cosmic Politics: Hugh of St. Victor’s ‘The Mystic Ark’ and the Struggle over Elite Education in the Twelfth Century.”  See also Rudolph, Conrad (2004) “First, I find the center point”: reading the text of Hugh of Saint Victor’s The Mystic Ark. Transactions of the American Philosophical Society, v. 94, pt. 4. Philadelphia, PA: American Philosophical Society.  The quoted phrases are from id. pp. 1-2, 76.  The dimensions of the painting are Rudolph’s estimates, based on his extensive work in reconstructing the painting.  The page count for the textual description is for a modern critical edition.  The textual description of the Mystic Ark orginally did not have a proper title, but it is now commonly titled The Mystic Ark.  To avoid confusion between the text and the painting, I explicitly specify either the textual or painted Mystic Ark.

[2] Such interests also motivate scholars to take a much more active role in organizing texts.  Developments of tables of contents, summaries, consistent chapter and verse numberings, indices, new page layouts, alphabetic indexing, and other such information technologies were quite dramatic with the rise of scholasticism from about 1140 to 1240.  See  Illich, Ivan (1993) In the vineyard of the text: a commentary to Hugh’s Didascalicon. Chicago: University of Chicago Press. The agency of readers has become a major strand in the ironic, essentalist narrative of post-modernism.