Garden & Cosmos: The Royal Paintings of Jodhpur, a recent, magnificent exhibition at the Sackler Gallery, included paintings memorializing the life of Maharaja Bakhat Singh. He was an eighteenth-century Rathore-Rajput ruler of the Jodhpur-Marwar kingdom, now in the Indian state of Rajasthan. A number of paintings depict the royal, cultured Bakhat Singh at his Nagaur Palace in a garden amidst a crowd of beautiful young women. They rub his legs, bring him food, play music for him, and bath with him. In one painting, Bakhat Singh, bare-chested in a large garden pool with twenty-one young women, playfully squirts, with an elongated pumping toy, water at one of the women.[1] Being a ruler gave Bakhat Singh extraordinary pleasure.

Before the Sackler Gallery’s exhibition re-introduced them to the international art world, the Nagaur Palace garden paintings had never been published and apparently were largely unknown. Why these paintings were not previously celebrated isn’t explained in the exhibition or accompanying book. Perhaps the paintings’ subject matter was a cause of intercultural moral concern in the past. Some tragic history may also have caused unease: Bakhat Singh gained his position in Nagaur by killing his father, the reigning ruler of Marwar. The book accompanying the exhibition explains:

It is unknown whether Abhai Singh [the eldest son] incited the murder so he could gain the throne for himself or, as was rumored at the time, Bakhat Singh was enraged that his father was having an illicit affair with his daughter-in-law, Bakhat Singh’s wife. Perhaps, as some historians have speculated, it was a joint effort formulated by the brothers to further their dual political and personal agendas. What is known is that when Abhai Singh returned to Jodhpur in late 1724, he gave Nagaur to Bakhat Singh in what many have interpreted as a reward for the murder. The Rathore nobles, however, never forgave this monstrous act. They found the patricide so abhorrent that no prominent structure was built for Abhai Singh at Mandore, the strikingly picturesque Rathore ancestral site where Marwar rajas’ deaths are honored with elaborately carved, red sandstone cenotaphs.[2]

Bakhat Singh’s Nagaur Palace garden paintings were not created to evoke horror and pity.  Appreciating the pleasure they depict requires only a simple heart. 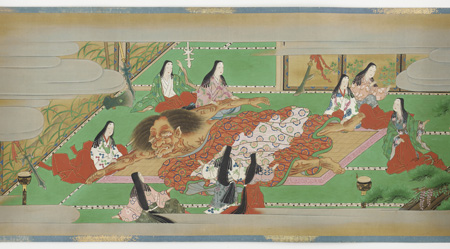 The Tale of Shuten Dōji, now on exhibit at the Sackler, depicts a morally sanctioned response to a male with unauthorized, wicked relations with beautiful young women. The tale of Shuten Dōji goes back in illustrated form to fourteenth-century Japan or earlier. Shuten Dōji is a demon-ogre typically depicted as large, ugly, stupid, and barbaric. He kidnaps beautiful young women to serve him at his castle-fortress. The emperor dispatches samurai to rescue the women and destroy the ogre. Carrying out this mission leads to a series of prototypical incidents involving wise men, a distressed woman, some brave women, a magic potion, and disguises. Ultimately, the samurai prevail in a ferocious battle. They behead Shuten Dōji and kill many of his demon-helpers. They rescue many beautiful women from the ogre. Returning the women to the city, the samurai parade through the streets and display Shuten Dōji’s head on a cart. 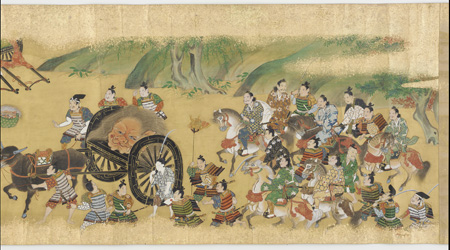 An early nineteenth-century Japanese wall hanging depicts Shuten Dōji with food and two beautiful women amidst blossoming cherry trees.  While one of his demon-helpers kneels on the ground in a guarding position, Shuten Dōji, in attractive human form, sits on a tiger skin.  The two women wear lavish, noble dress and have extraordinarily long, black hair.  One woman serves sake to Shuten Dōji, who does not look at her but rather gazes out on the cherry blossoms.  Below, a lone woman washes a kimono undergarment in a stream.  The remaining parts of the voluminous kimono rest on the river bank.  The kimono belongs to one of Shuten Dōji’s unpictured female victims.  The wall hanging is large, about 1 by 2.5 meters, and sumptuous, made from gold on silk.  It presents an elegant composition with hints of barbarism and horror.  It is a well-designed as a noble incitement to anger and retribution.[3]

The tale of Shuten Dōji was represented in a variety of media and became known throughout all levels of Japanese society. As a treasure made for the royal Japanese court about the year 1700, the tale of Shuten Dōji was represented in three, 20-meter long scrolls illustrated with color ink, silver, and gold on silk.  A noted painter made the illustrations, and an imperial prince and two other noblemen contributed calligraphy. Two large six-section folding screens, dating from 1625-1650, display scenes using ink and gold on paper scenes. During the Edo Period (1615-1868), the tale of Shuten Dōji was also depicted on lavish hanging scrolls and arrangements of multiple paper fans.[4]

The tale of Shuten Dōji was also represented through much more modest means. In nineteenth-century Japan, the tale was depicted in small, printed books with black-and-white woodcut illustrations and very little text.[5]  The book was relatively cheap and accessible to the illiterate. At the end of the nineteenth century, the tale of Shuten Dōji, with English text, was printed in Japan in a small, color-illustrated book series entitled “Japanese Fairy Tales.” Book no. 19, Ogres of Oeyama, is on display in the Sackler exhibition. Book no. 18, The Ogre’s Arm, is available online. Drawing on popular English Gothic clichés, the text at one point declares, “It happened one dark and stormy night….” The Japanese fairy tale series seems to be designed for middle-class Japanese readers eager to learn to read English novels.

Male sexual desire is a powerful motivating force. It plays out within interpersonal fields of authority, resentment, and anger.  Resentment and anger at an imaginary ogre’s access to women was probably easier to generate and distribute than appreciation for a historical ruler’s fantastic sensual delights.

The Tale of Shuten Dōji is ongoing at the Sackler Gallery through September 20, 2009.

[2] Glynn, Catherine, “Rathore and Mughal Interactions: Artistic Development at the Nagaur Court, 1600-1751” p. 14, in Garden and Cosmos: The Royal Paintings of Jodhpur.

[4]  Kano Shōun illustrated the scrolls, which include calligraphy by Imperial Prince Fushiminomiya Kuninaga (1667-1726).  All the works described here, unless otherwise noted, are on display in the exhibition.  Some of the works can be seen online here.