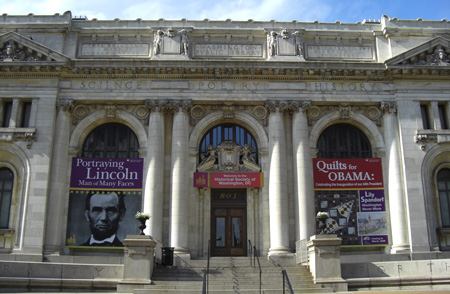 More than half the libraries existing in the U.S. in 1919 had received construction grant money from Andrew Carnegie.  Andrew Carnegie was a Scottish-born U.S. industrialist who acquired massive wealth.  He believed in self-improvement through hard work, and he considered public libraries to serve this purpose by making knowledge available to everyone.  Hence Carnegie set up a grant program for the construction of public libraries.

The total value of Carnegie’s grants to U.S. libraries was about equal to that of the current U.S. broadband stimulus package.  Carnegie donated more than $40 million between 1886 and 1919 to construct 1,679 new libraries in the U.S. (about $56 million for libraries world-wide).  As a share of GDP, Carnegie’s total donation to U.S. libraries is about equal to the current $7.2 billion U.S. broadband stimulus package.

Some requirements for communities seeking Carnegie grants for libraries:

The size of Carnegie grants were typically based on the population of the community and averaged about $2 per person. Here’s an example of the information required from Carnegie library grant applicants.

The Carnegie library grant program contributed significant to the development of the excellent U.S. public library system.  Carnegie seems not to have been concerned that public libraries might compete with commercial rental libraries.  Such competition never became a major public problem.