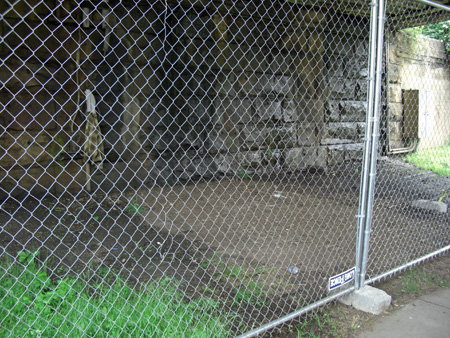 For at least the past five years, a few men have made their home under a bridge behind the FCC headquarters building in Washington, DC.  They made bed platforms using packing crates and stacked newspapers.  One of the guys organized his stuff neatly and made his bed tight, military-style.  On a record-cold winter day, with the wind howling, I remember seeing another guy, wearing a thick winter hat, with just his nose and mouth sticking out from under a pile of blankets.  A couple of years ago, one guy had an old bike and a collection of old bike parts.  I gave him one of my bike helmets and told him he should always wear a bike helmet when he rides his bike. I’m don’t know if he actually wore it, but about a year later I did see the helmet still there with his stuff. Several weeks ago, two guys were playing chess while another watched the game.

About two weeks ago these guys’ stuff was gone and the public space where they lived was enclosed with a high, but clearly temporary, fence.  I would guess that making your home under a bridge is probably some kind of crime. But if the men living in this public space had been arrested and put in jail, there would have been no need to enclose the area with a fence.  So maybe the fence was an alternative to imprisonment. Between the alternatives of imprisoning persons and enclosing public space with a fence, I support the fence.

But I’m not convinced that calling for either arrest or a fence is a good call.  Good basketball officials recognize the importance of game management.  That means in part that, before you call a foul, you consider whether the particular act created the risk of rough play, or affected the relative advantage of players.  If the act did neither, you might just let the players play through.  You don’t want the game to focus on the rules and on you the official.  In this case, I don’t think the guys sleeping under the bridge were harming anyone.  It is true that they were sleeping right next to one of the most luxurious hotels in Washington.  But since they were on a quiet back side of the hotel and under a bridge, most guests probably didn’t know that these guys were there.

Managing public resources isn’t just a matter of administering rules. It also requires some mercy and a sense for fair play.