With an insightful display of different viewpoints, the Smithsonian’s exhibition, Jamestown, Québec, Santa Fe: Three North American Beginnings, explores settlement and unsettlement.  An opening theme of the exhibition is “unsettling the continent.”  Text on a large sign-barrier at the beginning of the exhibition presents in three languages this one text:

Societies of indigenous peoples inhabited the North American continent for thousands of years. In the 1500s, limited contacts with European explorers, traders, and fishermen introduced deadly germs and disrupted established alliances, rivalries, and ways of life. Soon, however, European efforts to create permanent settlements would introduce more devastating disease and challenges on an earth-shaking scale.

One of the diseases that Europeans carry is a strain of fanaticism that makes them prone to bizarre delusions.  According to Wikipedia, which may be more credible than the Smithsonian, 18 European attempts at colonizing North America failed prior to the founding of Jamestown. Why did these Europeans again and again voyage to bring disease and earth-shaking challenges to North America?  Of the 104 European colonists who landed in Jamestown in April, 1607, only 38 survived through January, 1608.  Why didn’t the rest just return home and stay there?  Instead, hundreds more arrived, and hundreds more died during the “starving time” in the winter of 1609-1610.  Fanaticism along with delusions must have driven those early settlers.

Maybe it’s their religion.  The curators of this exhibition hold positions roughly analogous to those of high-ranking clerics in seventeenth-century Europe.  A large sign in the exhibition declares in three languages:

Europeans believed in an orthodox theology, whether Catholic or Protestant.  English, French, and Spanish settlements each established a state church and prosecuted dissenters from what they considered “the one, true faith.”

Indigenous peoples were more tolerant of new beliefs and ways of connecting with the divine.  Yet Powhatan, Algonquin, Huron, and Pueblo peoples all encountered newcomers who expected them to abandon their religious beliefs and embrace European ones.

“Europeans believed in an orthodox theology, whether Catholic or Protestant.” Do most ordinary persons actually believe this?  The Orthodox in eastern Europe, who understand themselves to be neither Catholic nor Protestant, believe in Orthodox Christian theology.  Jews and Muslims living in Europe have probably believed that their faith is true, and other faiths, false.  Perhaps that makes Jews and Muslims living in Europe orthodox, but they’re neither Catholic, Protestant, nor Orthodox.

Europe was fertile ground for new, competing religious ideas and organizations.  For example, among Christians living in England in the seventeenth century were Protestant Episcopals (who divided into High-Church Anglicans versus Latitudinarians), underground atheists and underground Roman Catholics, Lutherans of various reform orientations, Presbyterians, Calvinists, Baptists and Anabaptists, Pietists of various sorts, Quakers, and Puritans, among others.  Looking back about 2500 years, the tribal religions in Northern Europe and the gods of the Greeks were altogether different forms of religion.  It’s highly unlikely that peoples living in North America prior to European settlements had as much spiritual innovation and re-organization as did peoples living in Europe.  That’s because the sort of social elaboration, stratification, and competition that led to the Smithsonian Institution and its exhibition of seventeenth-century North American history fosters religious innovation.

At the exhibition exit is a large standing sign-board.  It’s titled, “The Year is 1700: Where Does Everything Stand?”  It declares:

There is not yet a nation called Canada or a country called the United States.

Settlement is taking place not only from east to west but begins at many points and moves in many directions.  Unsettlement — the loss of population and disruption of Native societies — may be the key characteristic of the era.  Still, Native peoples outnumber European colonists at least nine to one.
…

As  yet, neither Spain, France, nor England dominates.  Native nations and European ones will continue to contend with one another, some for domination, others for survival.

Leaving the exhibition, persons living here, now, in both Europe and North America, should worry about their future. 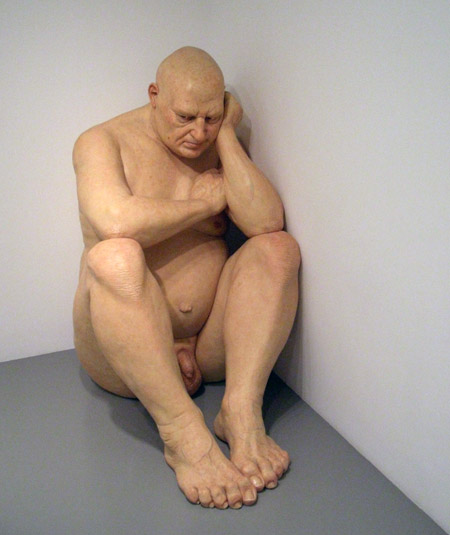 Jamestown, Québec, Santa Fe: Three North American Beginnings is on display at the Smithsonian’s International Gallery, Ripley Center, through Nov. 1, 2009.  The Virginia Historical Society and the Smithsonian’s National Museum of American History co-organized the exhibition.  The sculpture pictured above is Ron Mueck’s “Untitled (Big Man),” 2000.  It is in Strange Bodies: Figurative Works from the Hirshhorn Collection, on display at the Hirshhorn though the fall, 2009.