Among the cocky young men in the new ruler’s entourage, one wears a t-shirt declaring, “business is good.”  The back of his t-shirt adds, “my business is killing.”  Such a combination of power, inhumane interests, and brutality, writ large, animates Shakespeare’s King Lear.  For a production with the Shakespeare Theatre Company, Director Robert Falls has set King Lear in the disintegrating Yugoslavia of the early 1990s.  This magnificent King Lear presents a morally devastating realism for our times.

This realism is far from a fairy-tale synopsis of the play. Falls observed,

So many people come at King Lear with this misguided story of ‘once upon a time, there was a nice king who had two evil daughters and a good daughter’. I still see productions like that! I felt that this play had to really honor every single character. All the characters are capable of good and evil, and we don’t often recognize the monsters that move among [within] us until it’s too late.

The opening scene is a banquet jumbling long-recognized markers of high and low social status.  A huge portrait of King Lear as a young man hangs in the background.  The image is that of the young Stacy Keach, the great Shakespearean actor who is playing King Lear.  Like many rulers of dictatorial nation-states that have emerged over the past century, King Lear appears as a despot who has created his own national history and his own personal position of power. 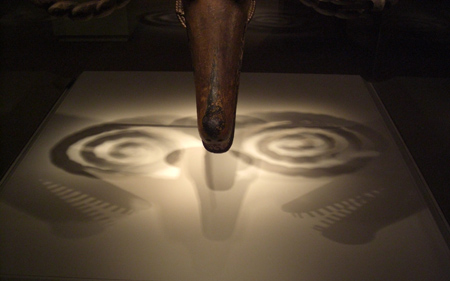 Laura Odeh, playing Cordelia, effectively brings out questions about Cordelia’s moral commitments. When asked to declare her love for her father as part of a shallow public ritual, Cordelia literally says, “Nothing.”  This is conventionally interpreted as indicating her sincerity, earnestness, and dutifulness. Odeh’s acting admits no such myth.  Most sympathetically interpreted here as being slightly autistic, Cordelia soon shows acute social skills.  Her farewell to her sisters contains sophisticated relational aggression:

I know you what you are;
And, like a sister, am most loath to call
Your faults as they are named. Love well our father.
To your professed bosoms I commit him;
But yet, alas, stood I within his grace,
I would prefer him to a better place.
So farewell to you both.

The phrase “most loath to call your faults” is like “I won’t mention your drunkenness”; “your professed bosoms” is like “your so-called love”; and “I would prefer him to a better place” is hardly sisterly.  Odeh delivers these lines brilliantly.  Few in the audience could miss how Cordelia is using words.

Jonno Roberts as Edmund and Chris Genebach as Cornwall play well contrasting types of male monsters.  Edmund is a psychopath who consciously acts all his own emotions  as instruments of his small, hard, amoral core of interests. Edmund preys on his father’s childish credulity.  Cornwall is Edmund turned inside out.  The socio-economic-cultural circumstances of competition for high status among men and sexual access to women determine who Cornwall is and what he does.  In the setting of this production, Cornwall is a brutish thug.

The trajectory of King Lear is squalor and death.  Falls’ production takes King Lear all the way to being a homeless person rummaging in a battle-ravaged city transformed into a garbage dump. The elaborate setting includes strewn plastic garbage bags, twisted piles of metal, an upended half of a destroyed car, and partially demolished, black buildings. The broken sections of the buildings are shiny black like the plastic garbage bags. They thus add a surreal overtone to the scene.

Death is insistently represented and magnified in this production.  Cornwall and the servant who intervenes to try to stop Cornwall from gouging out Gloucester’s eyes both die in horrifying ways that go beyond the texts of King Lear.  Regan’s response to her husband’s death shocks emotionally with actions that none of the texts requires.  Gloucester dies onstage in his son’s arms.  Lear appears carrying the naked, dead Cordelia in a scene worthy of Greek tragedy. Lear’s death, in turn, Stacy Keach powerfully plays with a fleeting taste of his daughter’s spirit.  Both Goneril and Regan die onstage with savage, terrifying actions.

These and other directorial choices that modify or augment the texts of King Lear accentuate the brutish horror of the play. One reviewer praises Falls for being “willing to show us the truth of this story full in the face.”  Another reviewer observes:

There’s choking and shooting and raping in this show, too – all done on stage. Gosh! I don’t think I want to be an actress when I grow up anymore!! How it was all staged is remarkable, but still very confusing and disturbing to me.

Gloucester declares, “As flies to wanton boys are we to th’ gods; / They kill us for their sport.”  King Lear truly is a confusing and disturbing play, and this production, especially so.

The realism of this production overwhelms a key play within King Lear.  Edgar pretends to take his blind father Gloucester to a high cliff at Dover. Gloucester jumps from the imagined cliff. This play within the play is produced only in the imagination, without any help from the stage’s setting.  Yet later a hole for disposing bodies is opened in the stage.  An image of that hole, slightly depressing that stage section, or some other staged effect would have better connected Edgar’s play to the play as a whole.

Just like King Lear, Edgar’s play deserves to be taken seriously.  Following Gloucester’s illusory leap, Edgar explains to the audience, “Had he been where he thought, / by this had thought been past.” But he wasn’t where he thought, and thought and life go on.

Hadst thou been aught but gossamer, feathers, air,
So many fathom down precipitating,
Thou’dst shivered like an egg; but thou dost breathe,
Hast heavy substance, bleed’st not, speak’st, art sound.
…
Thy life’s a miracle. Speak yet again.

Shakespeare, a profoundly self-conscious playwright, recognizes that real life is made from more than realism.