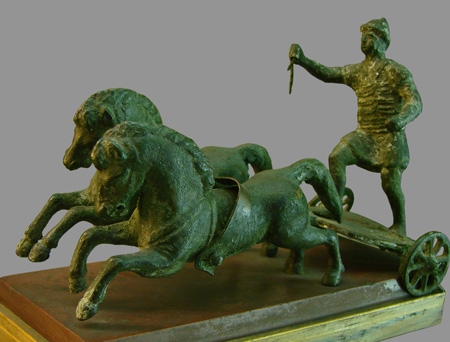 Roman spectacles were regularly and frequently scheduled.  Public games (ludi) were used to mark annual religious festivals.  By the middle of the first century BGC, Rome had every year about seventy-five formal holidays with public games.[1]  In addition to this regularly scheduled programming, specials also occurred.  Spectacles celebrated special events such as military victories and temple dedications.  Gladiatorial contests were also typical components of funerals for high-status Romans.

Roman spectacles had a mass audience.  About 2000 years ago, the largest event venue in Rome, the Circus Maximus, held 150,000 to 250,000 persons.  Since the total population of Rome then was about a million persons, roughly one-third of the adult population of Rome could gather at the Circus Maximus.  The theater of Pompey, Rome’s first permanent theater or amphitheater, hosted its first games in 55 BGC. According to a classical source, this monumental theater held 40,000 spectators.  The structure included an awning to shade spectators, water flowing down aisles to cool the building, and scented sprays to provide a more pleasing atmosphere.  The Flavian amphitheater, popularly known today as the Colosseum, hosted its inaugural games in 80 GC.  Classical sources estimated its capacity up to 87,000 persons. It, too, was a lavish building, with all-marble interior seating and a highly decorative exterior.  While the theater of Pompey and the Colosseum were smaller than the Circus Maximus, they still held roughly 5% and 10%, respectively, of the adult Roman population about 2000 years ago.[2]  These shares are the same magnitude as ratings (share of television households) for leading U.S. broadcast TV programming today.

Painted advertisements for games have survived under the ashes that buried Pompeii in 79 GC. These advertisements promoted the games’ sponsors as well as the games themselves:

Brought to you by Decimus Lucretius Satrius Valens, permanent priest of Nero Caeser, son of Augustus, twenty pairs of gladiators.  And presented by Decimus Lucretius, son of Valens, ten pairs of gladiators.  They’ll fight at Pompeii from the sixth day before the ides of April, through the day before.  There will be a standard venatio [animal fights or men hunting animals] and awnings [to provide shade for spectators].[3]

Fees weren’t charged for admission to games in the Roman empire.  Much like modern sponsors and brand advertisers, sponsors of Roman spectacles sought a praiseworthy reputation and popular goodwill.  Attracting a mass audience confirmed the value of a sponsor’s gift and hence supported return in goodwill.

Roman games created celebrities. Scorpus was a famous first-century charioteer who recorded 2,048 victories by the age of 27.  A contemporary Roman poet composed an epigram for him:

I am Scorpus, the glory of the clamorous circus, your applause, Rome, and brief darling.[4]

Diocles, a charioteer from about a century later, earned 1,462 victories in 24 years of chariot racing. He won a total of 35.8 million sesterces, including 3 victories worth 60,000 sesterces each.[5] For comparison, a professional Roman soldier earned about 1,200 sesterces per annum about 90 GC.

Portraits of gladiators have commanded the greatest interest in art for many generations.[6]

Small stores near the Circus Maximus and the Colosseum sold cheap game souvenirs such as small oil lamps made in the shapes of gladiators’ armor and terracotta statuettes of gladiators.  More luxurious items also recalled games and heros: pocket mirrors and carefully wrought folding knives decorated with gladiators, and large mosaics and sculptures of gladiators, charioteers, and charioteers’ horses.[7]

Chariot races, gladiator contests, staged animal fights and hunts, and other spectacles played a major role in the rise and fall of political leaders.  Julius Caesar waited twenty years to work himself into the right political position to celebrate his father’s funeral with games bigger than ever before:

when he was an aedile [a leading public office], he provided a show of 320 pairs of gladiators fighting in single combat, and what with this and all his other lavish expenditure on theatrical performances, processions and public banquets, he threw into the shade all attempts at winning distinction in this way that had been made by previous holders of the office.[8]

After abolishing the Roman Republic and making himself emperor, Caesar continued to sponsor lavish games to promote popular favor:

His public shows were of great variety.  They included a gladiatorial contest, stage-plays for every quarter of Rome performed in several languages, chariot-races in the Circus, athletic competitions, and a mock naval battle. … Wild-beast hunts took place five days running, and the entertainment ended with a battle between two armies, each consisting of 500 infantry, twenty elephants, and thirty cavalry.[9]

Augustus, Caesar’s successor as emperor, outdid his predecessor by providing eight gladiatorial spectacles in which ten thousand gladiators fought and twenty-six public wild beast hunts in which 3,500 animals were killed.[10]

Emperors’ support for public spectacles and their appearances and participation in these spectacles became central to imperial Roman politics.  At gladiatorial contests, the emperor Claudius identified himself with ordinary Romans and emphasized their power:

He gave many gladiator shows and in many places…. Now there was no form of entertainment at which he was more familiar and free, even thrusting out his left hand, as the commons did, and counting aloud on his fingers the gold pieces which were paid to the victors; and always and repeatedly he would address the audience, and invite and urge them to merriment, calling them “domini” (masters) from time to time, and interspersing feeble and far-fetched jokes.[11]

Games could also provide occasions for voicing disapproval of the emperor:

The feeling of the people was shown as clearly as possible in the theatre and at the shows.  For at the gladiators both master [Republican leader Pompey] and supporters were overwhelmed with hisses.  At the Ludi Apollinares the actor Diphilus made a pert allusion to Pompey, in the words: “By our misfortunes thou art Great.”  He was encored countless times.  When he delivered the line, “The time will come when thou wilt deeply mourn / That self-same valor,” the whole theatre broke out into applause[12]

A tutor to a popular emperor in the late second-century GC explained, “the Roman people are held fast by two things above all, the corn-dole and the shows.”[13]

Within imperfect democracies of the early twenty-first century, many characteristics of mass media are similar to those of mass media in the Roman empire.  How politics among a large population will be organized as mass media becomes much less important remains to be discovered.

[1] Beacham (1999) p. 2.  The first public games, called the Ludi Romani or the Ludi Magni, may date to 509 BGC.  The festival calendar grew rapidly in the third and second centuries BGC.

[2] Köhne and Ewigleben (2000) pp. 9, 24,  94.  Wikipedia’s list of largest cities indicates a population of Rome of 800,000 persons in 1 GC, based on George Modelski’s estimates.  More recent research supports constant Roman population in the first century BGC, with an adult male population about 350,000.  See Peter Turchin and Walter Scheidel, “Coin hoards speak of population declines in Ancient Rome,” PNAS 2009 106:17276-17279, doi:10.1073/pnas.0904576106, esp. Fig. 3. Current dependency ratios in less developed countries suggest that adults might have comprised roughly 60% of the total population.  Some classical seating sources: Dionysius of Halicarnassus, Roman Antiquities, 3.68 (Circus Maximus holds 150,000); Notitia Urbis Romae of 354 GC (Colosseum holds 87,000 spectators); Pliny, Natural History, 36.116 (theater of Pompey holds 40,000 spectators). Classical amphitheaters were elipse-shaped with seating in the round, while theaters were semi-eliptical.  Prior to 55 BGC, games and shows in Rome were hosted with temporary structures in the Roman Forum, circuses, and other public spaces.  Temporarily erected structures could be large and lavish. Perhaps the most extravagent one was constructed in Rome in 58 BGC for just a few days’ events:

The structure had three stories, supported by three hundred and sixty columns . . . .  The lowest level was marble; the next glass — a luxury never heard of since — and the top was fashioned from gilded boards.  The lowest columns. . . were thirty-eight feet high, and between them were placed three thousand bronze statues

[5]  Statistics from a lengthy epitaph for Diocles, CIL 14.2884, trans. in Futrell (2006) p. 200.  Gladiators were less professional than charioteers.  However, Suetonius, in Tiberius 7.1, records that Tiberius induced “some gladiators who had been honourably discharged .. to engage again, by a reward of a hundred thousand sesterces.”