Non-human animals can have quite complex social relationships.  Consider, for example, greylag geese.  They live in flocks.  Within a flock, the geese recognize closely related birds (kin) long past the period of necessary care for dependent offspring. In addition, the geese form long-term, opposite-sex, reproductive pair-bonds.  The geese identify close genetic relations (kin) with a much more genetically distant other (the reproductive partner) as a behavioral category of affiliated flock members.  Among affiliated flock members, almost no aggression occurs. Among non-affiliated flock members, aggression is frequent.[1]

Compared to males, female baboons’ sources of stress are more closely associated with social relations.  While females form dominance hierarchies, females have much less mating skew than do males, and a female’s position in the female dominance hierarchy is not correlated with her level of stress.  Females also are more active in forming and maintaining social relations.  Consistent with that social orientation, females seem to use grooming to reduce stress.  Although a female may groom at some time with all other females in her group, females typically groom mainly with a few predictable partners.  Those partners often are close female kin.  Females with greater dispersion in their grooming partner-time have higher stress.  If one of a female’s primary grooming partners dies, she suffers stress and increases her dispersion in grooming partners.  That’s reasonably interpreted as behavior oriented toward finding a suitable, new primary grooming partner.[4]

Language and complex cognition aren’t necessary for complex social relations.  Social relations among non-human animals are similar in important respects to those of humans.  If you want to understand Facebook better, study geese and baboons. 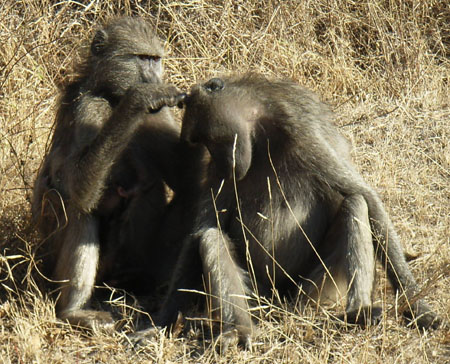