Unlike the telegraph and Morse Code, the telephone enabled communication in ordinary spoken language.  The telephone thus lowered transactions costs for conveying information quickly across space and created better opportunities for entrepreneurs to offer new information services.  Here’s an example of such innovation:

Several years ago [about 1902] an editor in a small Illinois town conceived the notion of strengthening his subscription list and, incidentally, making a little money on the side by running out farmers’ telephone lines into the surrounding territory.  Anywhere from fifteen to thirty telephones were put on one line. The farmers paid one dollar a month for the service, and, in addition to having the free use of the line for telephoning among themselves, and to the merchants of the town, they had a greater boon still.  The editor, as an inducement for subscribers, inaugurated a “daily telephone news service.”  Every night, when he received the latest Chicago newspapers, he cut out the principal headlines, and summarized the leading news items.  Then, at a certain hour, in response to a given signal, all the farmers on his lines picked up their receivers and the editor read to them the full news of the day.  In this way families living twenty miles from the nearest railroad or telegraph station had the news of the world as quickly as dwellers in the great cities.  The idea spread until now [1905] hundreds of country telephone companies are giving their farmer subscribers daily news service.

Newspapers and telephone companies need to regain this innovative spirit.  It’s the spirit of today’s Internet. 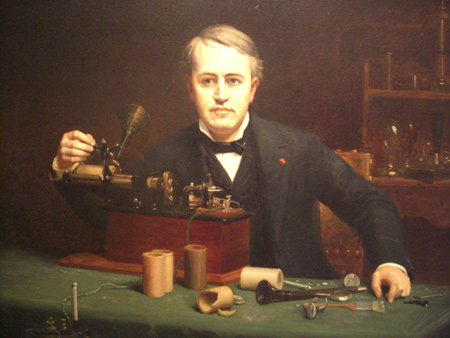 Quotation source:  Latzke, Paul. 1906.  A fight with an octopus; being the story of a great contest that was won against tremendous odds, as printed originally in Success magazine [Feb. 1906] Chicago: The Telephony Pub. Co., p. 44.