The Sacred Made Real: Spanish Painting and Sculpture, 1600–1700 had a sensational debut in the National Gallery, London, late last autumn.  An art critic began her review thus:

This is the most powerful show the National Gallery is ever likely to hold. One can say that without overstatement. It is not common for people to weep at a press view, nor to fall silent with awe, but both happened this week at the National Gallery.

This exhibition is now at the National Gallery, Washington. In our age of mechanical reproduction, here in a colder region of the world than Spain, profoundly natural artistic work, even life-sized, might be experienced without passion.  Yet even with just a small amount of time, attention, and receptivity, everyone can sense the full bodily reality of these works.  Everyone can understand that these are not just art, but vital works still active in living, loving devotion. 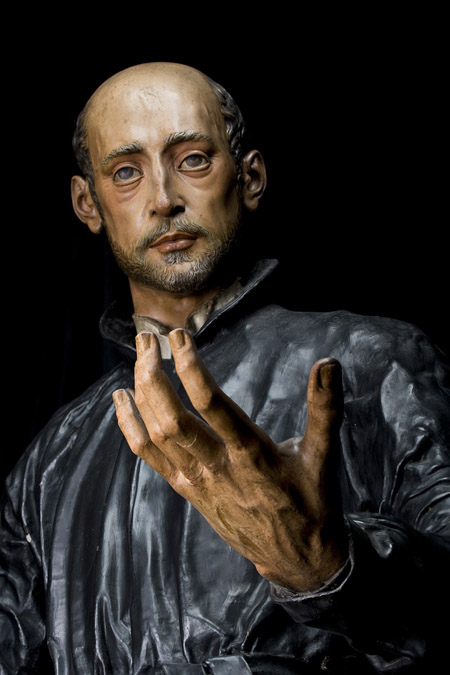 In sixteenth-century England, intense battles over sensuous means of representation confirmed the power of human sense.  Throughout the European Middle Ages, life-like statues of Mary, the mother of Jesus, wore gold crowns, rich robes, and rings, and were surrounded with candles, jewels, and burning incense.  They were widely venerated objects of popular religious pilgrimages.  The most famous English statues of this type were destroyed from 1535 to 1538.  They were not just destroyed, but executed through elaborate public executions in London of the type that a prominent human heretic might receive. Attempts to discipline human sense utterly failed in the form of the action:

A wooden statue of Derfel Gadarn, much honored at his shrine in Northern Wales, was taken to London and burned along with friar John Forest, who had been confessor to Catherine of Aragon and refused to renounce Roman Catholicism. Burning the statue of Derfel Gadarn along with friar Forest in part enacted a pun on a popular prophecy that Derfel Gadarn would one day set a forest on fire. Present at the execution of the statue and the friar were an array of dukes, earls, bishops, and a crowd contemporarily estimated at more than ten thousand persons. Hugh Latimer, who had been chaplain to King Henry VIII and was appointed Bishop of Worcester, preached a sermon from a specially constructed platform before the bonfire.[1]

With critical distance from the specific political and religious battles, one can only be in awe at the power of humans to make sense from words (a pun), a wooden statue (Derfel Gadarn), and an elite religious ritual (burning a heretic).

The Sacred Made Real offers a direct experience of works consummately designed for sensuous power.  Saint Francis in Meditation shows against a stark, dark background a kneeling Saint Francis, dressed in a tattered brown habit, pressing with clasped hands a skull to his breast.  His face is upturned in intense mediation. The light catches his nose, and the painting insists on Saint Francis’ three-dimensional form despite the flat canvas.  In another room, behind the wall displaying this work, two works show the dead Saint Francis standing in ecstasy.  One is a painting that seems to be a realization of a mental vision.  Another is a sculpture that encourages you to look up from Saint Francis’ bare foot, along a real knotted cord to an exquisitely modeled face with ivory teeth, glass eyes, and human-hair eyelashes. His cowl, which looks like a halo, takes the physicality of the sculpture back into the mental vision of the painting.[2]

While bodily senses collaboratively make one, The Sacred Made Real displays polychrome sculptures produced according to guild rules imposing skill separation in artistic production.  A sculptor not formally certified as a painter was forbidden to paint his own sculpture.  Hence polychrome sculptures in Spain early in the seventeenth century were typically produced through a contractual collaboration between a sculptor and a painter.   The sculptor and the painter typically split equally the total commission payment.

Over time, sculptors vertically integrated into painting to capture a larger share of the commission. The eminent sculptor Juan Martínez Montañés and the renowned painter Francisco Pacheco collaborated to produce many polychrome sculptures in Spain early in the seventeenth century. However, in 1621, Montañés won full control over a major contract for an altarpiece for the convent of Santa Clara in Seville. Montañés decided to keep three-quarters of the commission for himself as the sculptor and to hire a painter with the remaining quarter of the commission.[3]

Francisco Pacheco responded to Montañés artistic merger with a public letter learnedly declaring the distinctiveness of the painter’s art and asserting the superiority of painting over sculpture. Painters and sculptors, along with their intellectual advocates, have been arguing since antiquity about the relative value of painting and sculpture (the argument probably stretches back to the first paid commission for a painted sculpture). Pacheco contributed to this argument and went on to write a book about the art of painting.[4]

Neither will I set about judging the defects in his works, although those who know in Seville find them even in his most careful productions.  Because I am convinced that he is a man like any other and thus it is no wonder that he errs like the rest.  For this reason I would counsel my friends to cease praising or damning his works, because he does the former better than anyone while there is no lack of people to do the latter.[5]

Pacheco collaborated with Montañés to produce many great works of sacred art.  The dispute between Pacheco and Montañés and the ego competition that shows up subtly in and across works exhibited in The Sacred Made Real are another dimension of the sacred made real. 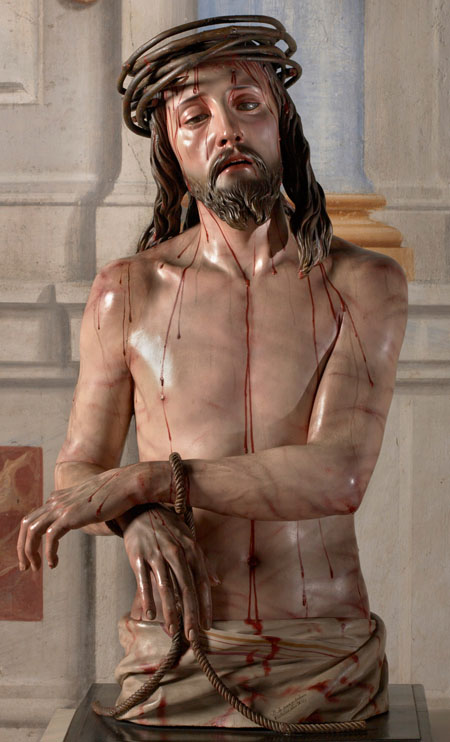 For me, the exhibition film being shown continuously in the auditorium below contained the most moving work in the exhibition. After discussing the exhibition, Xavier Bray, the curator, faces Velázquez’s painting, Christ After the Flagellation, pauses tensely for a moment, and then sings a saeta.  Knowing nothing about such song, I nonetheless found his action deeply moving. With whatever knowledge, experience, and beliefs you have, go to The Sacred Made Real and natural passion will move you.

The Sacred Made Real: Spanish Painting and Sculpture, 1600–1700 is at the National Gallery of Art, Washington, through May 31, 2010. The exhibition is presented on the occasion of the Spanish Presidency of the European Union, with the support of the Ministry of Culture of Spain, the Spain–USA Foundation and the Embassy of Spain in Washington, DC.  The National Gallery is the only U.S. venue for this exhibition.

Images courtesy of the National Gallery of Art:

[4] Id. p. 19.  Pacheco’s book, Arte de la Pintura, was published in 1649.  While the relative value of sculpture and painting continues to be debated, the integration of sculpting and painting became common in Seville in the second half of the seventeenth century.  Pedro Roldán secured certification in both sculptor and painting, as did Alonso Cano, who was one of Pacheco’s students.  Cano taught his sculpture students Pedro de Mena and José de Mora to paint their own sculptures.  Three of Mena’s polychrome sculptures, which he painted himself, are included in the exhibition.