On March 10, 1876, telephone inventor and entrepreneur Alexander Graham Bell made his first telephone call.  The Bell Telephone Company was formed in the U.S. in July of 1877.  By the end of 1877, three thousand telephones were in service.[1] The first commercial telephone exchange began operation in New Haven, Connecticut, on January 28, 1878. By mid-1878, about 10,000 telephones were in service.  The U.S. Census of 1880 noted:

the census year 1879-’80 was the year in which the [U.S.] telephone business passed through the stages of an unprecedented development.  At the beginning of that year this business amounted to little or nothing; at the end of the year it represented one of the great interests of the country.[2]

The Census of 1880 reported income statement, balance sheet, and operating figures for 148 telephone companies.  These data thus provide a snapshot of the telephone business less than three years after its commercial beginning. 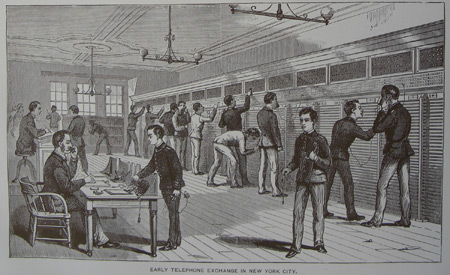 The early U.S. telephone business reduced its operating expenses per telephone relatively rapidly.  Comparing telephone companies serving between 500 and 2000 telephones in 1880 and 1916, operating expenses per telephone fell on an inflation-adjusted basis about 4% per year from 1880 to 1916.[3] That cost trend compares favorably to the 1.7% inflation-adjusted cost reduction in a broad measure of telephone company operating expenses from 1988 to 2007. The relatively good cost performance from 1880 to 1916 isn’t attributable to a shift from manual switching to automatic switching. Only about 4% of U.S. telephones were automatically switched in 1915.[4]

The Internet is associated with extraordinarily rapid technological change.  At least in terms of cost efficiency, the telephone business seems to be changing more slowly in recent decades than it did about a century ago.

[1] See the Telephony Museum’s Telephone History. The telephone counts are for telephones in the U.S.  The figures from that source differ slightly from those given in U.S. Historical Statistics, Series R-1.  The former seems to me more plausible.  Gardiner Greene Hubbard and Thomas Sanders formed the Bell Company on July 9, 1877, with these two men established as company president and treasurer, respectively. Renamed the National Bell Telephone Company in March 1879, it became the American Bell Telephone Company in March 1880. As these name changes indicate, the Bell Company rapidly internationalized.