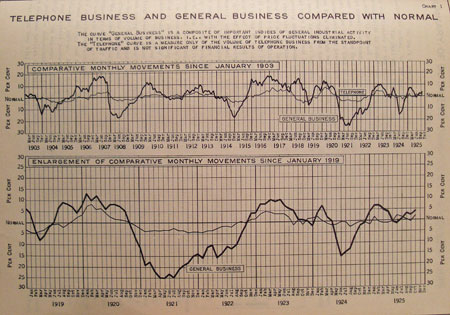 By October, 1923, American Telephone & Telegraph (AT&T) was producing a monthly booklet summarizing business conditions in the U.S.  The booklet presented movements in macroeconomic indices and described general business conditions by Bell operating company regions.  It also highlighted real business activity compared to telephone traffic.[1]  The relevant chart from the November, 1925 booklet is shown above (larger image here).  The chart highlights that telephone traffic is significantly more stable than the general volume of business. 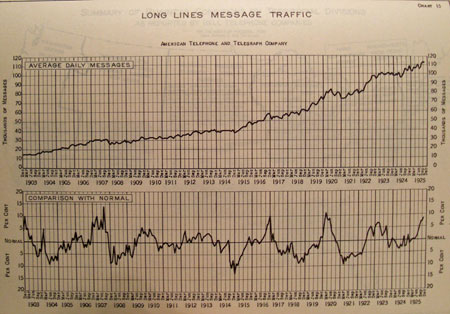 [1] AT&T included a similar chart in its 1919 Annual Report (pp. 44).  Under the heading “Stability of the Telephone Business,” the previous page stated:

Not only does the telephone business grow steadily even in times of business depression, as is shown by the diagram on the back cover of this report [diagram showing the number of Bell Telephones in service, from 1876 to the present], but that it does not suffer any substantial retardation in its normal growth during such periods, appears from the chart on the following page.

The telephone business varies very slightly from its normal growth as compared with the fluctuations of general business.  This is an element of security and enables the business to be carried on with a lower margin of surplus earnings than would be safe in general industrial undertakings.

The exact composition of the general business volume index that AT&T constructed isn’t clear.  The index generally tracks modern reference dates for business cycle expansions and contractions.  The index apparently is a composite of business volume indices for construction, iron and steel, copper, textiles, and miscellaneous industries, with perhaps also indices for trade and transportation and agriculture.

[2] Charts extending out to Sept. 1929: (1) business fluctuations, (2) long-lines traffic.  Here’s data read from the charts and the growth calculation.

Summary of business conditions in the United States (New York: American Telephone & Telegraph, Comptroller’s Department), monthly issues from at least Oct. 1923 to 1957.  After 1930, the publication doesn’t include data on the telephone industry.