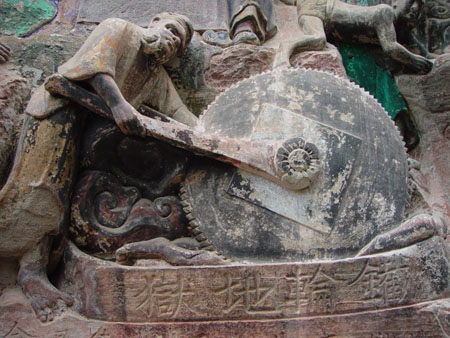 Iron discs continuously plunged into her body from out of the air,
Fierce fires, at all times, were burning beneath her feet;
…
Bronze-colored crows pecked at her heart ten thousand times over,
Molten iron poured on top of her head a thousand repetitions;
One might ask whether the tree of knives up ahead were the most painful,
But can it compare with the cleaving mill which chops men’s waists in two?[1]

Women lay on the iron beds with nails driven through their bodies,
Men embraced the hot copper pillars, causing their chests to rot away;
The iron drills and long scissors were sharp as lance-tips and sword-edges,
The teeth of the ploughs with their sharp metal points were like awls.
When their intestines are empty, they are at once filled with hot iron pellets,
If they cry out that they are thirsty, molten iron is used to irrigate them;[3]

This imagery of punishment suggests imaginative effects of traumatic industrial development.[4]  Much technological development occurred in China during the Tang Dynasty period (618-907).  Metal industries, along with an industrial workforce, became prominent in Western Europe in the nineteenth century.  At least in hell, these industries apparently were prominent in China a millennium earlier.

Punishment in Dante’s Inferno is less technological and more organic and interpersonal.  In the Inferno, the punished are confined in tombs of fire, brawl in mire, are blown about in storms, and are frozen in a lake.  The punished are consistently identified as specific persons with particular histories.  They regularly engage in personal conversations with Dante.  Dante’s hell doesn’t emphasize masses of persons subject to impersonal, external machinery.  Dante authored the Inferno in Italy between 1308 and 1321. Unlike the Chinese bian-wen text, copied in Dunhuang in 921, the Inferno reflects the socio-economic structure of a commercial city-state.

Three years have already passed since Lady Nīladhi [Maudgalyāyana’s mother] died.  The legal records of the criminal proceeding against her are all in the case-book of the Commandant of Mount T’ai, who is Recorder for the Bureau of the Underworld.