In its 1909 Annual Report, AT&T argued that competition among telephone companies is pointless.  AT&T declared:

Competition certainly had no effect on Bell revenue, was of no benefit to the public, compelled all to pay two subscriptions instead of one for complete service, besides all the other disadvantages of dual exchange systems [two separate telephone systems serving the same area][2]

The report included a chart comparing a group of cities with competition between Bell and independents and a group of “comparable cities” with only Bell service.  The chart displayed the reduction in Bell revenue per telephone and the growth in telephones per hundred persons from Jan. 1, 1894 to Jan. 1, 1909.  The trajectories of revenue reduction and telephone growth were similar for both groups of cities.  AT&T interpreted the chart to support its claim that competition had no effect. 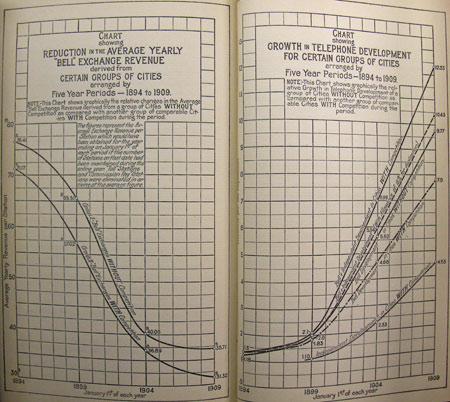