Recently I picked up a Selective Service registration form at the Post Office.  The persistence of sexist selective service has an interesting intellectual structure. The form itself, in contrast, displays simple, appalling moral obtuseness that goes beyond contempt for sex equality. 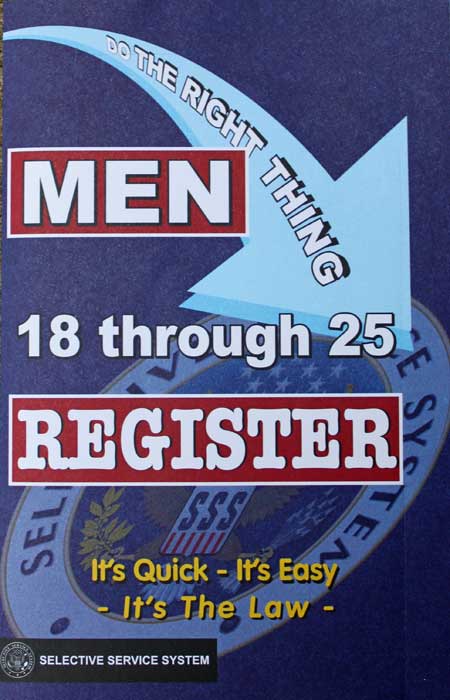 Inside the cover of the selective service form are answers to questions.  But the obvious, painful question, “How can this sexism be tolerated in the U.S. in the year 2010?” isn’t answered. The questions and answers that are listed only make that question more searing.

“What is Selective Service Registration?”

Registration is the process by which the U.S. Government collects names and addresses of men age 18 through 25 to use in case of a national emergency, determined by Congress and the President, which would require rapid expansion of the Armed Forces.

“What Happens If I Don’t Register?”

Not registering is a felony.  Young men prosecuted and convicted of failure to register may be fined up to $250,000, imprisoned for up to five years, or both.  Failure to register also may cause men to permanently lose eligibility for student financial aid, government employment, job training, and U.S. citizenship for male immigrants.

A felony?!!!?  Apparently criminal prosecutions for failure to register have not occurred since 1986.  But this crime remains in the law books, and severe punishment for it is cited in this current government form.  A least one man has recently lost his job because of failure to register with Selective Service seventeen years earlier.

Male U.S. citizens and immigrants, documented and undocumented, residing in the U.S. and its territories must register if they are age 18 through 25.

“What About After I Register?”

If you move, you are required by Federal law to provide address changes to Selective Service, which can be done at www.sss.gov to “Report a Change of Address Online,” or by filling out and mailing a SSS Form 2 (Change of Information) at the post office.

This is worse than being asked to display right of residence if stopped by the police.  Whether a citizen or not, whether a documented or undocumented immigrant, the Selective Service System demands under federal law to be informed of the movement of all males ages 18 to 25.  After all, these males might be needed in the future to die for freedom.