The Book of Kells is the most lavish European manuscript surviving from the early medieval period.  Probably created about 800 GC on an island off the western coast of Scotland or perhaps in Ireland, the Book of Kells includes many brightly colored illuminations with fractal-like intricacy.  The beautiful calligraphy in further enhanced with many decorated letters and additional small illuminations scattered across most pages. The extent of decoration is extraordinary:

The decorations are all high quality and often highly complex. In one decoration, which occupies a one-inch square piece of a page, there are 158 complex interlacements of white ribbon with a black border on either side. Some decorations can only be fully seen with magnifying glasses, although lenses of the required power are not known to have been available until hundreds of years after the book’s completion.

The Book of Kells was produced to be a special treasure.  It has been appreciated as such since its production. 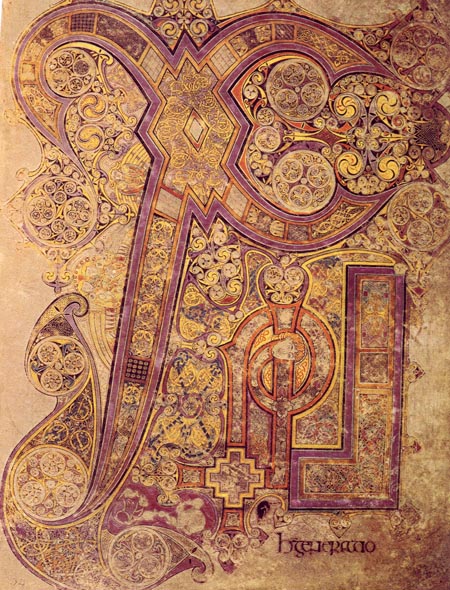 The impractical and muddled nature of the manuscript’s text — even by the standards of the day — is well established.  Nearly every page of text contains decorated initials, yet, with the exception of a few folios at the beginning of John, no Eusebian markings.  The Old Latin Breves causae [summaries of sections of the Gospels] do not match the mixed-Vulgate text.  The text is further marred by a large number of conflate readings, or ‘doublets’, and poorly copied contractions.  Additionally, the syllabification of the text is erratic.  Even the ornate display script contains its share of textual errors….[1]

Many persons who gaze on the Book of Kells today probably don’t realize or care about the literal quality of its text.  Did persons in early medieval Ireland, even the monks who produced it, look at the Book of Kells the way many tourists do today?

Lack of investment in the text of a lavish manuscript is not a unique feature of the Book of Kells.  Elaborate picture bibles produced in Paris early in the thirteenth century, known as Bibles moralisées, also had poor quality biblical text. A study of the Book of Ruth in these manuscripts observed:

two gross errors…strikingly ignorant / a ‘biblical’ text so bizarre as to be (unintentionally) amusing / there is no event in the biblical Ruth that remotely resembles what is narrated here / The priest of the law who gives Ruth to Boaz is an invention of the author without any basis in biblical narrative. / it is striking that the author is ignorant of the sex of the child and of his name, since a major element of the importance of the Book of Ruth (in terms of medieval Christianity) lies in the role of Ruth and of Boaz’s son Obed as the progenitors of David.[2]

These manuscripts were intended to provide moral instruction.  Their illuminations were made at great expense, probably for royalty.  Yet apparently little investment was made in ensuring the literal quality of the biblical text.

[1] Pulliam, Heather ( 2006) Word and image in the Book of Kells ( Dublin: Four Courts Press) p. 32.  Examples of errors include the text of Mathew 10:34, where Jesus declares, “I have come not to bring peace, but a sword.”  The Latin text of the Book of Kells erroneously replaces gladium (“sword”) with gaudium (“joy”).  It thus creates the much different statement, “I have come not to bring peace, but joy.”  The immediately subsequent text of Matthew (10:35: “For I have come to set a man against his father, and a daughter against her mother….”) jars sharply against the Book of Kells’ erroneous text.

[3] The thirteenth-century Morgan Bible of Louis IX did not originally include any text.  On that work, see Galbi (2003), Sense in Communication.