A millennium ago, the Persian poet Firdawsi completed his epic poem the Shahnama. Artists instantiated this lengthy verbal text in illustrated books.  Lavishly illustrated pages from Shahnamas produced for wealthy patrons from the fourteenth to sixteenth centuries are displayed in the exhibition Shahnama: 1000 Years of the Persian Book of Kings, now at the Sackler Gallery in Washington, DC.[1]

The extent of visual investments in these Shahnama texts is extraordinary.  The earliest pages in the Sackler exhibition are from the Great Mongol Shahnama.  It probably contained about 280 large folios with about 190 highly detailed, painted illustrations.  Although commonly called the Great Mongol Shahnama, it was produced in the waning years of the Mongol empire.[2]  The Shahnama of Shah Tahmasp, produced in a thriving Persian empire early in the sixteenth century, consisted of 769 large folios with gold-flecked margins, prized calligraphy, and 258 exquisitely painted illustrations.[3] The paintings from both these books, and from other books on display, delight at the closest scrutiny.

While these Shahnamas are extraordinary, pictorial storytelling has attracted large investments across cultures and time. The interaction of words and images occurs at early stages of sensory processing.  Writing and pictorial narratives have used common conventions from the time of the earliest writing.  Today, time spent watching television far exceeds time spent reading.  Adding images to words adds considerable value to a narrative.

The Bier of Iskandar, an illustration from the Great Mongol Shahnama and included in the Sackler Gallery exhibition, shows ways in which an image can work with a narrative. Firdawsi’s Shahnama text describes intense grief at the death of Iskandar (Alexander the Great).  His troops, “a hundred thousand children, men, and women of Alexandria,” Greek sages, his mother, his wife, and nobles all grieve in extravagant ways.  Firdawsi, however, doesn’t include chaotic, non-verbal, emotional expressions. His verse maintains a relatively formal register.[4] 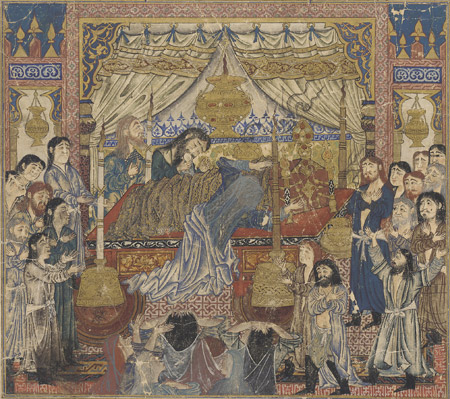 The Bier of Iskandar illustration highlights chaotic grieving.  The physical setting is highly regular: a central lamp, a square frame, symmetrical lamp niches on the sides, four tall candles marking the corners of the bier.  Within this regular setting crowd irregularly individualized figures who gesture in markedly different ways.  In the foreground, two women have their veils pushed down.  One pulls out her hair, while the other has her hands crossed palms downward on the top of her hand.  Perhaps this represents her heaping dust on her head.  Iskandar’s mother leans across the side of the coffin, with the back of her veiled head appearing to the viewer.  Aristotle, the philosopher, with his head bent downward into a handkerchief, appropriately seeks to conceal his grief.[5]  A Greek sage next to him looks serenely skyward.  Some men hold their hands across their chests; others stretch their hands forward, and others, skyward.  The composition places and juxtaposes these gestures in ways that make the differences quickly apparent.  These choices of visual art bring out the emotional chaos of grief contained within Firdawsi’s verbal art.

Isfandiyar’s Funeral Procession, another illustration from the Great Mongol Shahnama, has less personal differentiation than does the Bier of Iskandar.  At both Iskandar and Isfandiyar’s deaths, Firdawsi describes some common conventions of grief: weeping, wailing, pulling hair, heaping dust on head, unveiling women’s heads, cutting horses’ tails, and reversing saddles.  Both illustrations display the disorder that these actions indicate. Firdawsi’s narratives of Isfandiyar and Iskandar differ, however, in extent of internal tension.  The Isfandiyar’s narrative emphasizes unity that should have been between Isfandiyar and his father (Isfandiyar’s father sent Isfandiyar to his death) and Isfandiyar and Rostam (Rostam killed Isfandiyar).  The Iskandar narrative, in contrast, points to tensions between the Persians and the Greeks, between Persian wisdom and Greek sages, and between Iskandar’s mother and his wife.  The Isfandiyar funeral illustration shows a tumultuous sea of persons surrounding Isfandiyar’s coffin.  The disorderly persons surrounding Iskandar’s coffin are more individually articulated and contrasted.

The Sackler Gallery’s exhibition occupies only two small room on the first floor of the gallery. The displayed works are book pages that cannot be fully appreciated if they are viewed as wall paintings.  But like the Shahnama text does for world history, these illustrated pages encompass a huge span of visual art.  Visit Shahnama: 1000 Years of the Persian Book of Kings at the Sackler Gallery through April 17, 2011.  Until supplies run out, you can leave with a free exhibition brochure that, appropriately, has large pages and lavish illustrations.

[1] Firdawsi declared that he finished his work “in the month of Sepandormoz, on the day of Ard, and four hundred years have passed since the Hejira of the Prophet.”  Sepandormoz and Ard are a month and a day in the Zoroastrian calendar, while the Hejira is the focal date in the Muslim calendar.  Firdawsi’s finishing date corresponds to 1010 AD (Anno Domini) among persons oriented to preserving the cultural history of the Mediterranean, and 1010 CE (Common Era) in the currently dominant dating system in the West.  A very small party of progressive, culturally sensitive scholars refuses to conform to either and uses 1010 GC (Gregorian Calendar) instead.  The quote is from Firdawsī, trans. Dick Davis (2007), Shahnameh: the Persian book of kings (London: Penguin) p. 854.

[2] Scholars have attributed the Great Mongol Shahnama to royal artists in Tabriz, Iran, in the 1330s, under Il-Khanid ruler Abu Sa’id or Arpa Ke’un.  It is sometimes called the DeMotte Shahnama.  George Joseph Demotte was an art dealer who dismembered the book and sold individual paintings from it.

[3]  Artists under royal patronage produced the Shahnama of Shah Tahmasp in Tabriz, Iran, circa 1525.  It is sometimes called the Houghton Shahnama.  Arthur Houghton was an art dealer who bought it in 1959 and dismembered it in 1972.  The Hamzanama of Akbar is the only illustrated text that plausible exceeds the Shahnama of Shah Tahmasp in magnitude of material and artistic investment.