From 1935 to 1939, the U.S. Federal Theatre Project (FTP) created jobs for out-of-work theater professionals.  It organized and funded a wide range of productions — “from productions of sacred plays of the Middle Ages to classic plays by William Shakespeare and Richard Brinsley Sheridan and modern works by George Bernard Shaw, Gerhard Hauptmann, Lillian Hellman, Eugene O’Neill, and Anita Loos. ”  The legendary “voodoo Macbeth“, vaudeville, puppet shows, and dramatic productions in Yiddish, French, Russian, Italian, Spanish, and German all occurred under the FTP.

Exactly how different interests — racial, ethnic, geographic, and cultural — were balanced isn’t clear.  In 1937, the FTP formed a National Service Bureau from its Play Bureau and Play Policy Board. The National Service Bureau was based in New York City.  It provided research services on American theater to FTP units spread across the U.S.  Concern about New York City’s financial and cultural domination has been an important strand in American history from the early nineteenth century.  That concern doesn’t seem to have registered with the FTP. 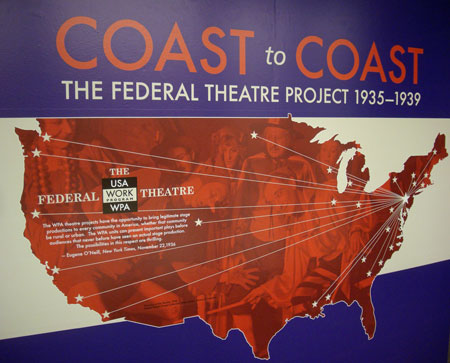 In 1936, the famous and highly honored U.S. playwright Eugene O’Neill strongly endorsed the FTP.  He declared:

The WPA theatre projects have the opportunity to bring legitimate stage productions to every community in America, whether that community be rural or urban.  The WPA units can present important plays before audiences that never before have seen an actual stage production.  The possibilities in this respect are thrilling.[*]

The distinction between legitimate theater and illegitimate theater was rooted in a theater licensing act enacted in England in 1737. In Europe, state-sanctioned theater engaged in fierce political battles with popular theater.  O’Neill associated “legitimate stage productions,” “important plays,” and “actual stage productions.”  Many persons in many different communities across the U.S. probably had experience of popular theatrical productions that O’Neill did not recognize.  The goal of bringing theater to all Americans presupposed an exclusive definition of theater.