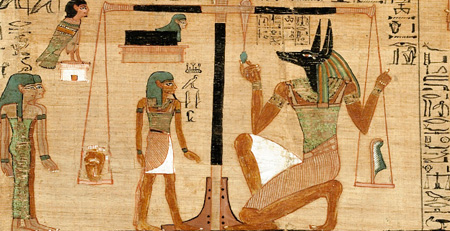 About 3300 years ago in Egypt, the wealthy helped themselves through the afterlife by commissioning and having buried with them a personal copy of spells for “emerging forth into the light.”  One obstacle to emerging forth into the light was the weighing of the heart.  Bad behavior made the heart heavy.  If the heart was not lighter than a feather, then a beast would consume the deceased, and her existence would cease.  A standard spell for establishing a light heart included these declarations:

I have propitiated God with what he desires; I have given bread to the hungry; water to the thirsty, clothes to the naked and a boat to him who is boatless [1]

About 1300 years ago, probably somewhere in Mesopotamia, a Jewish teacher also taught care for the poor:

About 2000 years ago in Palestine, another Jewish teacher, whom some regarded as a rogue or traitor, taught similarly:

Destiny-determining judgment depends on care for the poor.

The specification of the poor in particular texts varied.  The widow and orphan were among the poor within each text’s frame of understanding.  However, only one of the three texts above mentions the widow or the orphan (the fatherless).  Specific literary reasons might explain the widow and orphan’s exclusion in particular texts.  The third text, for example, is written from the perspective of Jesus of Nazareth.  He was a man and hence would not figure as a widow.  He repeatedly emphasized his intimate relationship with his father; he could not be imagined as an orphan.  Nonetheless, Jesus and his early disciples made clear that the widow and orphan were among the poor.[4]

Including the boatless among the poor may not be merely an ancient Egyptian idiosyncrasy.  An ancient Jewish song praising the Lord in times of trouble described persons hungry, thirsty, in prison, sick, and persons doing business on boats caught in storms.[5]  Like being boatless, doing business on boats caught in storms seems less universally relevant than being hungry, thirsty, in prison, or sick.  However, the ancient Egyptians understood boats to be the vehicles by which gods traveled across the sky and through the underworld.  Persons could aspire to voyage with a god in the afterworld, and they worried about evil forces carrying them away in a boat:

let me not be carried away in a boat, or be seized violently and taken to the East [6]

Perhaps boats gained more universal significance through their association with the realm of the gods and after-worldly travel.

The poor included persons in prison.  Even pushing aside persons doing business on boats caught in storms, ancient Jewish song included persons in prison among the hungry, thirsty, and sick.[7]  Jesus’ description of judgment not only explicitly included those in prison, but also in its Jewish-poetic repetition closely associated being sick and being in prison.  The righteous asked, “when was it that we saw you sick or in prison and visited you?”  The accursed were told, “I was … sick and in prison and you did not visit me.”[8]  The association of being sick and being in prison has deep historical roots and an obvious mechanism of relation: under the harsh conditions of ancient prisons, many prisoners became sick.  Persons who were sick and incapacitated also might understand themselves to be imprisoned by their sickness. Thus an Akkadian poem written in Mesopotamia about 3100 years ago laments:

I took to a sick-bed of confinement, going out was a hardship,
My house became my prison.
A fetter for my flesh, my arms were useless,
A shackle to my person, my feet were done for.
My afflictions were severe, the wound grave.[9]

The Qur’an, which from the Arabian Peninsula in the seventh century encompassed much Egyptian, Jewish, and Christian understanding, declares that devotees of Allah “feed, for the love of Allah, the indigent, the orphan, and the captive.”[10]  Those in prison were among standard types of the poor for most of recorded history among the earliest civilizations from North Africa through Mesopotamia.

Weigh your heart today.  Are prisoners among the poor?

[3] Matthew 25:35-36, trans. RSV.  A figure of God speaks these words.  As Grindheim (2008) insightful observes, this text shifts the account from first-person merit claims to divine observation of actions taken without knowledge of their merit.

[6] Introductory Hymn to the Sun-God Re and Spell  93.  The first is trans. Faulkner (1985) p. 27.  The second is from the Budge’s translation of the Papyrus of Ani.  That translation more clearly conveys the concern about the boat.  Boats figure in many spells in the Book of the Dead.

[8] Matthew 25:39, 43, trans. RSV.  The text’s parallel structure is preserved for other types of the poor in these conversational turns.