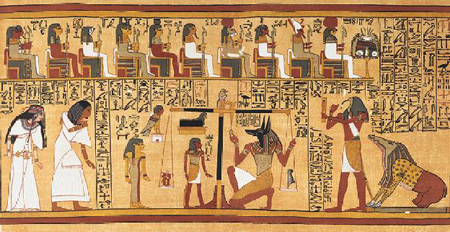 About 4400 years ago, Unas, the last Egyptian pharaoh in the 5th dynasty, was buried within a pyramid with written inscriptions on the walls of the burial chamber.  Subsequent pharaohs were buried similarly.  The texts on the walls of the pyramids’ burial chambers are a corpus of spells to aid the pharaoh in the afterlife.  These pyramid texts were not illustrated.  After a few centuries, texts began to be written on the inside surfaces of wooden coffins that contained non-royal persons.  These coffin texts seldom had any illustrations.  After another roughly six centuries, funerary texts began to written on papyrus rolls buried with the deceased.  The funerary texts written on papyrus, called the Book of the Dead, have a well-differentiated textual corpus from the earlier pyramid texts and coffin texts.  In addition, Book of the Dead rolls usually include illustrations.  Book of the Dead rolls have been found that include text only in a brief opening, with the rest of the work consisting only of illustrations.[1]

The inclusion of illustrations in ancient Egyptian funerary texts is plausibly associated with broadening of demand for the texts.  The change in media from burial chamber walls (pyramid texts) to coffins (coffin texts) to papyrus (Book of the Dead) reduced requirements for site-specific work and fostered increased division of labor and mass production of texts.[2]  The supply of scribal skills was probably constrained by the complicated representational language and well-established scribal guilds.  Illustrators, in contrast, probably were less organized and had less formal training.  Hence the supply of illustrators could increase more rapidly and more propitiously than the supply of scribes.  Popular demand favors production of images.  That sensory effect is likely to be greater in a largely illiterate society such as ancient Egypt.  Illustrated funerary texts were thus probably a market-driven development in ancient Egypt.

The relation between word and image in the Book of the Dead is highly fluid.  Consider, for example, the text images above and below from the papyrus of Ani, a Book of the Dead from Thebes about 1275 BGC.[3]  The illustrations in the text above are irregularly positioned and do not have bounding boxes.  The three illustrations in the top left portion of text below have regular bounding boxes.  The right portion of the text contains top-and-bottom nearly identical images that actually differ in subtle ways (the most obvious difference is the left-most white figure’s hairstyle).  Most surprising is the right-most figure’s hand gesture that breaks into the column of text.  Having an illustrated figure gesture into the space of the text is common in European medieval illuminated manuscripts. 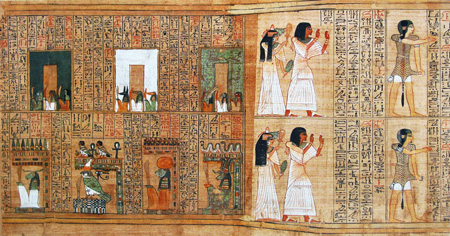 [2] In some instances, different sections of a Book of the Dead were written by different scribes.  Scribes might work on separate pieces of papyrus that would later be joined together.  Scribes produced texts with spaces left for illustrations (vignettes).  Scribes also left blank spaces for filling in the name of the person who purchased/acquired a particular text.  Id.  pp. 36, 268-9, 286.

[3] Ani was a Theban royal scribe — “Accounting Scribe for the Divine Offerings of all the gods. Overseer of the Granaries and of the Lords of the Tawer.” Id. pp. 310, 36.