Competition to promote learning was intense in Baghdad about a millennium ago.  In 1065, Nizam al-Mulk founded the Baghdad Nizamiyah religious college. The famous theologian and philosopher al-Ghazzali was appointed a professor there in 1091.  The Baghdad Nizamiyah’s library acquired caliph al-Nasir‘s library, which was claimed to be better than even the 400,000 book library of al-Hakam in Cordoba.  By the end of the twelfth century, the Nizamiyah was the most splendid of more than thirty colleges in Baghdad.[1]

The thirteenth-century Abbasid caliph al-Mustansir sought to enhance his reputation through association with scholarship and education.  In 1233, al-Mustansir founded a new religious college in Baghdad, the Mustansiriyah.  This new college had magnificent buildings and lavish amenities for facility and students.  Its professors displayed great scholarly prestige.  For example, in a great hall, a professor of law, seated on a carpet-covered chair under a wooden cupola, lectured:

with much sedateness and gravity of mien, he being clothed in black and wearing a turban; and there were besides two assistants, one on either hand, who repeated in a loud voice the dictation of the teacher.[2]

The Mustansiriyah library included many books spanning all categories of knowledge.  The size of its book collection reportedly exceeded that of the Nizamiyah and all other colleges.[3] 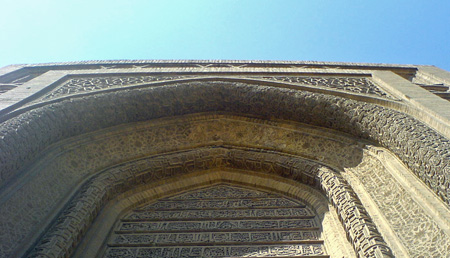 [2] Id., p. 299, quoting from Ibn Battuttah’s description of his visit to Baghdad in 1327.  The two assistants had jobs similar to those of today’s graduate students.