These recent findings from high-tech genetic research would not have surprised readers of Islamic sailors’ tales from a millennium ago.  These tales include many descriptions of human-animal hybrids.  For example, a sea captain noted:

Someone who has been to Zaila and the land of the Ethiopians told me that in the Ethiopian Sea there is a fish just like a human being, in body, hands, and feet.  Fisherman who go afar, unhappy men who spend their lives in unexplored regions, on desert shores, in islands and mountains where they never meet another human being, sometimes find this fish with a human face.  They hold congress with the female.  From them are born beings that look like men, and live in the water and in the atmosphere.  Perhaps these fish with human faces originally derive from a union between a man and some sort of fish, a union that would have produced these creatures like men: after which similar unions would have gone on for centuries.  It is in the same way that men, by coupling with panthers, hyenas and other land animals, have given birth to monkeys, nasnas and other animals that look like man. It is in the same way that the union of pigs and buffalo have produced the elephant, {the union of } dogs and goats the wild boar, and {the union of} the ass and the mare the mule.  If we let ourselves tell all the results of these sorts of union, it would amaze the reader. [1]

A sailor told of what happened when he was left alone while his shipmates went in search of provisions:

a band of moneys came round the ship, and tried to board it.  I chased them away with stones.  A large female succeeded in reaching the ship.  I chased her away, and thought she had gone.  But she deceived me, and climbed up the other side of the ship beside me.  At that time I was about to eat, and I threw her a crust of bread.  She ate it.  In the evening I saw her returning, carrying a bunch of bananas in her mouth.  She called out, and I helped her up.  She put the bananas in front of me, and I ate them.  From then on she did not leave me.  Each day she went and came back, and spent the night on the boat, beside me.  She stirred my desire, and I had congress with her. [2]

The monkey got pregnant. The sailor, ashamed of his action, fled to sea in the ship’s small boat.  When the ship’s crew returned to the ship, they found the female monkey living there, along with child monkeys that had “a human face, a hairless chest and a shorter tail than is common among monkeys.”  The crew recognized that the sailor was the father of the monkey-children.  Some believed the sailor had fled; others believed that the female monkey had killed him.  In any case, the crew “got rid of the monkey and her little ones.”  The sailor, who nearly perished at sea, eventually found his way home and told the story.

Humans in the past imagined themselves in close relation to the natural world of animals.  Hybrids are frequently represented in stories and images across human history and cultures.  Hybrids indicate both recognition of types and admixtures.  Paleoanthropology is pointing to both differentiation and hybridization in human evolution. 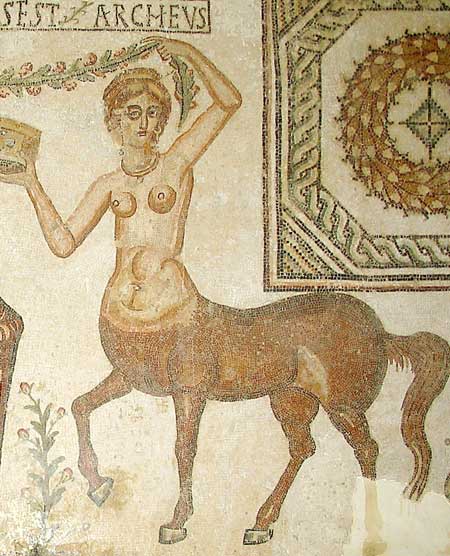 [1] Trans. Freeman-Grenville (1981) pp. 23-4. The compiler of the tales was Captain Buzurg ibn Shahriyar.  He was from Ramhormuz in Khuzistan and probably sailed from Siraf on the Persian Gulf.  Some of the tales in his book are explicitly dated between 900 and 953 GC.  The surviving copy is dated 1013.

One thought on “hybrids: a historical-cultural perspective”