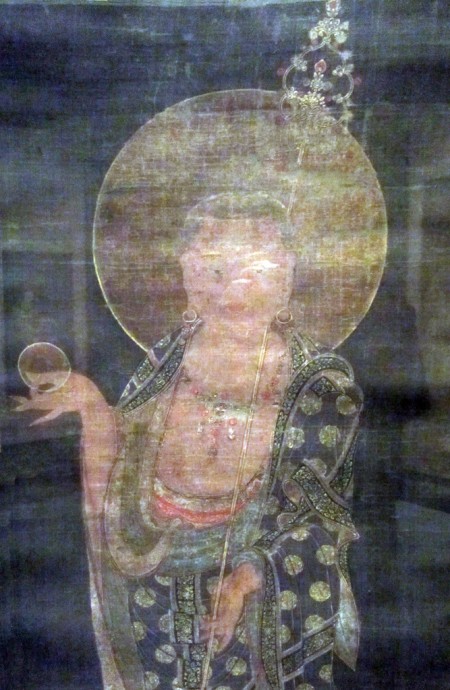 Christians are widely thought to have been expelled from China towards the end of the Tang Dynasty, and welcomed again only with the establishment of the Yuan Dynasty.  In late Tang China, the Huichang Persecution that peaked in 845 forbid the practice of Christianity.  A Christian priest who journeyed to China about 980 reportedly found a destroyed church structure and only a single Christian.[1]  Because its Mongol leaders had close relations to Christians, the Yuan Dynasty supported Christians in China after its establishment in 1271.  Between 845 and 1271, Christianity in China seems to have had little recognized institutional support.

Christianity in China persisted even without institutional support.  Friar William of Rubruck, who traveled to the Mongol court at Karakorum in 1254, reported that Christians were then living in fifteen cities in northern China.  Rubruck reported:

As far as Cataia {northern China} there are Nestorians {Christians} and Saracens {Muslims} living among them with alien status.  The Nestorians are to be found in fifteen cities of Cataia, their episcopal seat being a city called Segin {Datong}; but further afield the people are exclusively idol-worshippers {Buddhists}. [2]

Rubruck was hostile to the Nestorians, whom he described as “ignorant.”  He doesn’t seem to have been interested in exaggerating the significance of Nestorian missionary activity.  Segin (Datong) was in fact the episcopal seat that encompassed the Mongol court at Karakorum, but in the eastern church’s institutional structure Segin was subordinate to the Christian metropolitan at Khanbaligh (Beijing).[3]  Evidence from the travels of Marco Polo indicates late thirteenth-century Christian communities in northern China.  These include Cacianfu (Hejian), which had one church building, and Egrigaia (Ningxia), which had three beautiful church buildings.[4]  Other evidence indicates that Christians persisted among Buddhists and Confucians in south China.[5]

Brief biographies exist of two Christians who grew up in early thirteenth-century China.  Bar Sauma was born in a Christian family living in early thirteenth-century Beijing. His father was a wealthy Christian, well known in Beijing, who held an office within the Christian church there.  Bar Sauma, whose name has biblical significance, was instructed in Christian doctrine as child.  He became an official in his local church.  He subsequently took holy orders as a monk with the ritual actions of the Beijing-area Metropolitan (archbishop).  In another city in early-thirteenth-century China, a man who was an archdeacon in his local Christian church had a son named Markos, born in 1244.  Markos was instructed in the doctrines of Christianity.  As a young man, he too became a Christian monk and was a disciple of Rabban Bar Sauma. After Bar Sauma and Markos withdrew from society to become Christian monks, they became known for wisdom and attracted pilgrims.[6]  The lives of Bar Sauma and Markos indicate that Christians were well-integrated into northern Chinese society before the establishment of the Yuan Dynasty.

Fundamental religious beliefs of persons are often expressed diffusely.  Different religious beliefs were not separated by great stone walls in ancient China.  Buddhists, Christians, Confucians, and Manichaeans could all be confused for each other.  With repression of Christian institutions in the late Tang Dynasty, Christians in China were more likely to assimilate into other, permitted religious institutions.  Material and institutional support for a distinctive way of life surely is important for it to flourish.  At the same time, an alternate way of thinking about the world is not easy to eliminate.

When I saw that there were none to whom I could give support in their religion, I returned in less time than I had gone.

Christians in China probably had a low public profile and were closely associated with other groups, particularly Buddhists.  The monk, a foreigner who seems not to have spent much time in China, probably wasn’t well-informed about Christians across all of China.

[4] For Chinese cities for which there is evidence of Christian presence, Dauvillier & Pelliot (1973), pp. 133-136.  Evidence from Dunhuang “includes a scroll containing a Chinese translation of the hymn Gloria in excelsis Deo together with a long list of other Christian texts that had been translated into Chinese in the late 8th century.”  Yuanyuan (2013) suggests that Christians in China were highly assimilated with Buddhists.  The Cross Temple in the Fangshan District near Beijing seems to have had both Buddhist and Christian affiliations between the Tang and the Yang Dynasties.  Id. p. 286.

[5] Lieu (2012), pp. 31-34, describes epigraphic evidence of the persistence of Christians in Quanzhou between the Tang and Yuan Dynasties. Marco Polo reported seeing a beautiful Christian church in Quinsay (Hangzhou).  Dauviller & Pelliot (1973) p. 135.  Smbat the Constable, who traveled to the Mongol court at Karakorum in 1246, reported, “we have found many Christians scattered all over the East, and many fine churches, lofty, ancient, and of good architecture.”  Letter to King Henry I of Cyprus, c. 1248.

[6] The history of Yaballaha, trans. Montgomery (1927) pp. 27-33.  Markos was born “in the city of Koshang in the Country of the East.”  Koshang was a fourteen to sixteen days’ journey from Beijing (calculated based on Bar Suama’s and Markos’s travel times to their monastic retreat).  A leading scholar believes Koshang to be “Tong-chen, a town in the Ongut country (Odoric’s Tozan or Cozan), west of Peking.” Id. p. 30, n. 2.  Bar Sauma subsequently traveled to Rome as an official from the Church of the East and met with Pope Nicholas IV (Jerome of Ascoli) in 1288. Id. p. 67, n. 4.

Jackson, Peter, trans. 1990. Willem van Ruysbroeck. The mission of Friar William of Rubruck: his journey to the court of the Great Khan Möngke, 1253-1255. London: Hakluyt Society.

Montgomery, James A., trans. 1927. The history of Yaballaha the Third, Nestorian Patriarch, and of his vicar Bar Sauma, Mongol Ambassador to the Frankish courts at the end of the 13th century. Records of civilization, sources and studies, no. 8.  New York.

Yuanyuan, Wang. 2013. “Doubt on the Viewpoint of the Extinction of Jingjiao in China after the Tang Dynasty.” Pp. 279-298 in Tang, Li, and Dietmar W. Winkler. 2013. From the Oxus River to the Chinese shores: studies on East Syriac Christianity in China and Central Asia. Berlin : LIT Verlag Münster.