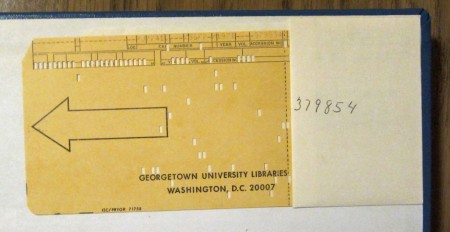 I recently found a punched-card book circulation card in a library book.  Old-fashioned forms of meta-data incorporated in the book indicate:

The punched-card circulation card probably was incorporated into the book in 1973.[*]  That’s only 40 years ago.  This library book is now checked out with a light-scanned barcode feeding into a computerized, online-queriable book circulation system.  The contents of the book, Kitab Bilawhar wa Budasf, were probably written in eighth-century central Asia.  Imagine this library book in circulation 1300 years in the future!

[*] Punched card library book circulation systems were in use in the 1970s.  CalMeachem over at the Straight Dope Message Board wrote:

When they first switched over to computers, Rutgers University library had an IBM card punch machine at the checkouts. When you took out a book they manually punched in the call number on the card, along with your information, then duplicated the card. One went into a stack to be batch-processed in those pre-network days, the other into the card holder glued into the book from pre-computer days. Checking out a stack of books could take a long time. And I kinda miss than quaint Ka-CHUNK, chunka-chunka-chunka-CHUNK of the old IBM card punches. Nowadays they just laser-scan the bar code and it all automatically goes into the system.

I worked in two academic libraries in Australia that had similar systems back in the 1970s.