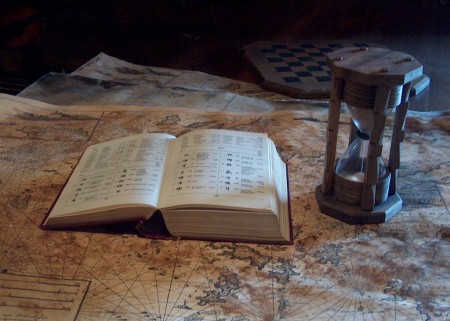 In twelfth-century Syria, Patriarch Michael the Great wrote a massive world chronicle in Syriac.  That chronicle began with the creation of Adam and continued chronologically to Michael’s own time.  Michael didn’t create from events a story, a history.  Michael, as a Christian, believed in all-encompassing Christian history.  Michael the Great’s chronicle presented events in time for fellow learned clerics to study and ponder Christian history.[1]

Michael organized the pages of his chronicle to relate visually events.  Typically a chronicle page contains three vertical columns of text above a canon table synchronizing different calculations of years.  The sixteenth-century Syrian scribe who copied from Michael’s autograph stated:

{Michael} sorted out ecclesiastical events and, where possible, he gathered them in the superior column, just as we have written, and the succession of the kingdoms in the middle column, and the accidental things and miracles in the inferior column. He had great trouble with the separation, for the accounts were written helter-skelter [2]

The autograph apparently had columns arranged symmetrically about the book opening.[3] Superior columns meant the outer columns, and the inferior columns, the innermost columns. The Complutensian Polyglot Bible, completed in Madrid in 1517, used a three-column form for the Hebrew Bible.  The Complutensian Polyglot Bible placed the Hebrew text in the superior position.  It collated the Hebrew text with the Vulgate and the Septuagint.  Michael’s three columns collate sacred events, high-political events, and extra-institutional events (signs and wonders).  In Michael’s Christian understanding, these three columns presented different translations of God’s over-all plan in history.

Michael recorded serially four contemporary political-natural accounts of Jesus.  The first account is via Tertullian, a Christian scholar who lived from about 160 to 225:

Tertullian says that Pilate informed Tiberius about the teachings of the Lord Jesus.  In turn, Tiberius informed the Senate.  He {Tiberius} did not accept the accusation about him {Jesus}, but determined to kill the slanderers. [4]

The point of this account seems to be Jesus’s status in the eyes of the Roman Emperor Tiberius.  That’s a matter of political chronology.  The second record is attributed to Phlegon of Tralles, a non-Christian writer who lived in the second century:

Phlegon, the heathen philosopher, says that the sun darkened, the earth trembled, and the dead resurrected and entered Jerusalem and heaped woe upon the Jews.  He says in Book Thirteen of his history concerning the Olympiads that, “In the fourth year of the 204th Olympiad, darkness occurred six hours on Friday.  The stars appeared and Nicaea and Bithynia trembled from quakes, and many regions were destroyed.” [5]

Michael didn’t include this account to prove that Jesus existed or that Jesus was God incarnate. He seems to have used this account to document natural phenomena that occurred during the time of Jesus’s death.  The third record apparently is attributed to Ursinus of Bourges:

In his Book Five, Ursinus says: “A terrible distress came upon us. We heard of horrible calamities in the Hebrews’ cities.  We have now known something about the letters sent by Pilate from Palestine to the heathen King Tiberius.  In these letters Pilate says, “Miracles happen upon the death of a man who was crucified by the Jews.  When Caesar heard of this, he relieved Pilate of his position because he succumbed to the Jews and connived with them.”

The Romans, not the Jews, crucified Jesus.  Ursinus of Bourges is a French saint who probably actually lived in the third or fourth century.  Michael apparently included Ursinus’s text because it was a relevant political-natural record from a Christian authority credible in twelfth-century Syria.  The final account is from the first-century Jewish-Roman scholar Josephus:

In his Antiquities of the Jews, Josephus says, “There was about this time Jesus, a wise man, if it be lawful to call him a man, for he was a doer of wonderful works — a teacher of such men as receive the truth with pleasure.  He drew over to him both many of the Jews and the gentiles.  It is believed that he was the Christ, and not as the leaders of the peoples say.  When Pilate, at the suggestion of the principal men amongst us, condemned him to the cross, those who loved him from the first did not forsake him, for he appeared to them alive again the third day, as the divine prophets had foretold these and ten thousand other things concerning him; and the tribe of Christians, so named from him, are not extinct to this day.”

This passage from Josephus, known as the Testimonium Flavianum, has been a subject of intense scholarly controversy since the sixteenth century.[6]  The controversy concerns the extent of Christian interpolations in the text.  Surviving manuscripts of Josephus’s Antiquities of the Jews date from the eleventh century and later.  In the place of “It is believed he was the Christ,” these manuscripts have “He was the Christ.”  A Jew surely would not have declared that Jesus was the Christ.  Michael’s source for Josephus’s Antiquities of the Jews apparently pre-dated surviving manuscripts and is more textually credible.[7]  The credibility of the text attributed to Josephus wasn’t an issue for Michael.  Michael independently believed everything that Josephus stated about Jesus.  Michael cited Josephus not in Christian polemic, but as a record of political chronology.

Michael’s political-natural records of Jesus support the over-all structure of his chronicle.  Those records document that Jesus won the favor of his political ruler and extraordinary events marked Jesus’s death.  Michael the Great’s chronicle insists that sacred events, high-political events, and extra-institutional events are all the coherent history of the divine plan being realized through time.

[1] The Hebrew Bible begins with the creation of the world.  Michael’s choice of beginning with Adam indicates that his chronicle concerns events in relation to humans.  Michael explicitly addressed readers of his Chronicle as brethren and scholars.  Within the text he recommended to readers further theological reading.  He used Greek technical terms without translation.  The implications:

we may safely assume Michael’s readers to be, like himself, well-trained clerics. It is therefore a work meant for “insiders”.

[4] Michael the Great’s Chronicle, Bk. V, Ch. 10, from Syriac trans. Moosa (2014) p. 106.  The subsequent three quotes are from id.  A Letter of Pilate to Tiberius is thought to have been written in Renaissance Latin, perhaps in the 16th century.  Michael’s Chronicle indicates that the tradition of such a letter is much older.  The Gospels suggest that Pilate knew little about Jesus’s teachings.  The Roman Emperor Tiberius, who died 37 GC, surely did not threaten to kill those who disparaged Jesus.

[5] The passage from Phlegon of Tralles exists in Eusibius’s Chronicle, which Michael used as a source.

[6] Whealey (2003).  Prior to the sixteenth century, Christians in Europe probably viewed Josephus’s text much as Michael the Great did.

[7] That some Christian interpolation exists in the Josephus passage was an easy claim for early textual scholars to make.  The extent of Christian interpolation is a much more difficult question.  Jerome’s De viris illustribus contains a Latin translation of the passage from Josephus and uses the phrase “credebatur esse Christus”  (he was believed to be the Christ).  The earliest manuscripts of that work date to the sixth or seventh century.  Syriac scholars typically didn’t read Latin works.  Whealey (2008) pp. 580-1.  Michael the Great’s version apparently represents text that existed before the sixth or seventh century.

[image] Composed photo by Anneli Salo, 2008.  Thanks to Anneli Salo and Wikipedia.

Bedrosian, Robert. 2013. The Chronicle of Michael the Great, Patriarch of the Syrians. Online at rbedrosian.com

Weltecke, Dorothea. 2000.  “Originality and Function of Formal Structures in the Chronicle of Michael the Great.”  Hugoye: Journal of Syriac Studies 3(2): 173-202.