The world is filled with animals communicating.  Just listen:

It is early summer in the temperate zone, with concerts at dawn and at dusk. In the morning, a babble of sparrows, finches, starlings and warblers greets the early riser. The rich tapestry of sound woven around a late evening stroller is no less palpable: the eerie whine of katydids, the gentle chirping of crickets, the visceral croaking of frogs. [1] 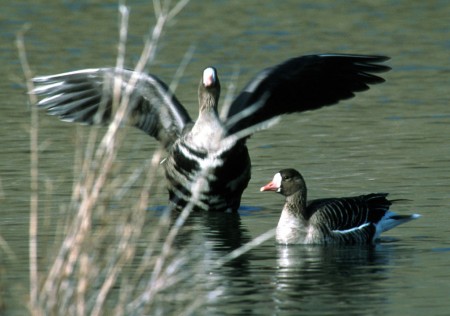 Study of animal communication has treated animal signals like symbolic communication, but simpler.  Signals can be understood as communication in which signifier and signified are rigidly and organically bound.  Animals pervasively engage in signaling.  That has created scholarly confusion:

there is widespread and often unrecognized confusion about the kinds of signals that exist, the mechanisms responsible for their evolution, and the terms to be used to describe them. [3]

We found that the non-singing females displayed two rapid responses to song, wing stroking and gaping.  Wing stroking is a rapid and silent response to song in which the female flicks her wing away from her body: when gaping, a female arches her head and quickly opens and closes her beak. … Females do other things as well, most noticeably, showing no change in behavior when a male sings, thus ignoring his overtures….  Males become very excited when the female departs from this demeanor and does something even so small as turning her head.  We have found that even brief wing strokes or gapes can lead a male cowbird to levitate off his perch, hop excitedly toward the female, and sing whatever song elicited the female’s movements.  Thus, the contrapuntal use of acoustics and visual signals between males and females may serve to orchestrate the sustained kinds of interaction necessary to each sex to profit from the encounter. [5]

Focusing on determining the meaning and reliability of particular signals can obscure systemic communicative effects.  A single signal in mating communication cannot be understood apart from the ongoing signals to which it is related.

Communication does not depend on organisms having highly developed brains.  Formal models demonstrate that information transfer and decision-making can occur “in the absence of explicit signals or complex mechanisms for information transfer.”[6] Despite very small brains, tandem-running ants engage in teaching.[7]  Single-cell bacteria engage in communication:

Over the past two decades, our view of bacteria has dramatically changed.  Bacteria have often been studied as populations of cells that act independently, but it now seems that there is much interaction and communication between cells….

The realization that bacteria can communicate, cooperate and alter their behavior, according to changes in their social environment, has led to an explosion of research in this area….  Most studies have focused on the molecular aspects of cell-cell communication, and much less attention has been paid to the ecological context of why bacteria produce signaling molecules and respond to both intraspecific and interspecific signals. [8]

The literature on bacterial communication shows some concern to define what types of signals count as communication.[9]  Categorizing signals by their intentions or effects is not likely to be the best approach to understanding communication. Communication between organisms typically involves ongoing interactions of a particular formal type.  A time frame of analysis, a form of behavior, and the organisms’ sets of feasible, conditional state transitions within those bounds provides a reasonable scope for analyzing communication among organisms from bacteria to humans.[10]

[2] Some non-human animals, e.g. apes, are capable of symbolic communication.  Some appear to engage in such communication in the wild.  See Arnold & Zuberbühler (2006).

[5] West, King & Goldstein (2004) pp, 377, 378.  Such communication can evolve through pair interactions involving different partners over time and does not depend on the congregation of conspecifics.

Balaban, Evan. 1994.  “Sex differences in sounds and their causes.”  In Balaban, Evan, and Roger Valentine Short, eds. The differences between the sexes. Cambridge: Cambridge University Press.