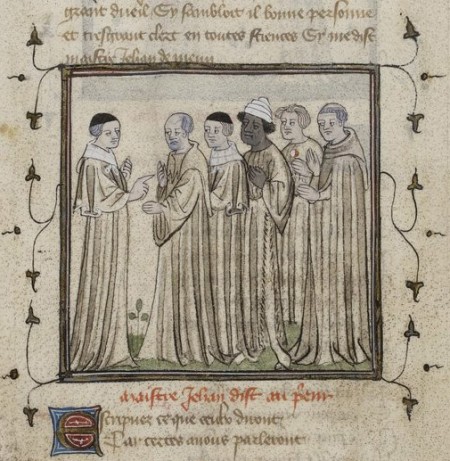 To all those who would hear the truth spoken may God give the determination to uphold and to proclaim it, where the opportunity presents itself, without duly offending anyone. [1]

He supported that statement with a Latin gloss citing relevant canon law. Bovet’s policy review took the form of a dream vision. In his sleep, the review narrator, a prior, perceived the brilliant and audacious scholar Jean de Meun conducting interviews with four marginalized or suspect medieval figures: a physician, a Jew, a Muslim, and a Dominican friar.[2] These figures delivered wide-ranging, radical critiques of French policy. The critique of financially exploiting prisoners illustrates both Honorat Bovet’s policy concerns and his treacherous position.

Financially exploiting prisoners occurred in medieval French jails rather like in U.S. jails and prisons today. In 1394, King Charles VI of France decreed that prisoners be allowed to purchase food provided from outside the jail. Without that opportunity, prisoners were forced to pay for food whatever prices the jailer chose to charge. Charles VI also capped release fees that jailers could charge prisoners and decreed that no fees could be charged to prisoners who have been unjustly imprisoned.[3] In a recent order, the U.S. Federal Communications Commission capped the rates that prisoners may be charged for interstate telephone calls. Prisoners previously had been subjected to whatever telephones rates the service provider arranged to charge.

Speaking through the Muslim, Honorat Bovet indicated that existing regulation of jails was insufficient. The Muslim declared:

I do not dare to speak of how jailers
Oversee their prisoners;
But I have been told along the way
That their tableware and wine, they get from prisoners:
Neither gold nor silver will he take with him,
The prisoner who leaves the jail.
When someone tells him that this is a crime,
And he always replies at once
That the jail costs him a great deal of money
And that he’ll never lose a single cent while running it.
If the king knew what went on there,
He would never tolerate such a thing. [4]

Jails in the U.S. today commonly receive roughly half the revenue collected for prisoners’ telephone calls. Like jailers in fourteenth-century France, jailers today claim that they need revenue from charges to prisoners for telephone calls in order to continue to allow prisoners to call the outside world.

The issue is politically difficult. In Honorat Bovet’s policy review, the Dominican friar presented the issue as concerning the extent and recipient of the financial extractions from prisoners:

The Saracen {Muslim} says of jailers
That they despoil their prisoners,
But this much is certain:
That the jail revenue belongs to the crown,
And that, truly, it is not small sums
That are raised in the jails.
It is against the law of charity,
And the king is not well informed:
He could take the matter in hand,
And put a person {in charge} who would, in all certainty,
Levy the royal right properly,
Without harming the aforesaid prisoners. [5]

Like the Muslim, the friar highlighted the king’s lack of knowledge: “the king is not well-informed.” The friar shrewdly appealed to the financial interests of the king. At the same time, the friar also urged that royal rights to financial extractions from prisoners be exercised properly, without harm to prisoners.

Honorat Bovet’s policy review was fundamentally concerned with incentives and government. Its narrator represented the complacent elite, relaxing after dinner in a Parisian garden. Jean de Meun castigated him:

You sit there eating, like a pig,
Doing no good for anyone. [6]

Jean de Meun urged the narrator to speak out for reform. The narrator responded:

I do not know what I am supposed to say in this day and age, because the world is too perilous and the courts of princes too dangerous. And if it please you to recall some ancient teachings, Valerius Maximus repeated the opinion of a very wise senator who once, when he saw that the Republic was being governed poorly, did not wish to give his opinion in the council, and so replied: “By my faith,” he proclaimed, “My words have I often regretted; my silence, never.” And for that reason, in my opinion, when the world is a dangerous place, one does well to keep silent and to live through this time. What is more, the world takes for a fool the man who seeks to write of new things.

This happened at a time when the Republic had the sort of tyrants that a false criminal accusation would be sought in whatever way against such innocent persons, so that through it they would suffer death and thus their goods would be confiscated to the public treasury. Therefore at that time crimes were imputed not with references to persons but riches. Therefore from such a malign rule deliver us, O Lord!

Financial interests can corrupt criminal justice. Crime shouldn’t pay. That’s easy to say with respect to criminals. That’s much harder to describe and criticize with respect to the governing elite.[7]

[2] Honorat Bovet was the Prior of Selonnet in Provence. Despite the dream and distanced voices of L’apparicion Maistre Jehan de Meun, insightful readers would have recognized through those fictions Honorat Bovet’s policy critique. Hanly (2005) p. 35.  On the other hand, the four royal officials to whom Bovet’s dedicated copies probably lacked the learning to appreciate his Latin glosses and scholarly citations. Id. p. 3.

[7] Completed in 1398, Bovet’s work was largely ignored for more than four centuries:

Since the political effort represented by the Apparicion maistre Jehan de Meun ultimately failed, and might even have put an end to Bovet’s career at court, his program appears to have been grounded in misplaced belief in both the good will and the intellectual ability of the most powerful French nobles. … Honorat Bovet addressed his poetic appeal to a very difficult audience, and hindsight would suggest that such criticism could hardly have the desired effect. But it seems hard to believe that the man would have written the poem — and paid for two deluxe presentation copies, to boot — if he did not give it at least an even chance of winning over hearts and minds. Given his circumstances, therefore, Bovet’s optimism is extraordinary, and even inspirational. … Il pourra bien venir un jour.