Apparently disgruntled handicraft workers, they’re easy to dismiss as cranks. But they offer a powerful critical perspective on Conversions, a juried group exhibition at the Ellipse Arts Center in Arlington through Sept. 29, 2006.

Most of the works in Conversion are attached to walls. Joan Sarah Wexler’s “Tearooms and Restaurant Interiors” are photographs arranged on a wall, as are Susan Eder / Craig Dennis’s work, “Which Image Never Fades Away?” Lisa Kellnor’s “Oil Spill,” constructed from pins with large yellow heads, is firmly tacked to the wall.

Amy Glengary Yang attached to a wall an array of cyanotypes (images made with an early photographic process) mounted in lightboxes. Protruding in front of the lightboxes is a bell jar containing a neon-lighted sea urchin skeleton and topped with an air pressure gauge. It’s an enchanting work, set against a wall.

Some works, such as Michele Kong’s “Reticula” and Amy Martin Wilber’s “Three Fates,” hang from walls to cover windows. “Reticula” is an exquisite lace of translucent glue. Kong made her boundary from wire. Only a few strands are oriented like a fence, while many are coiled around those few.

Tai Hwa Goh’s luscious intaglio on hand-waxed paper hangs from a wall like ponds compressed into a multi-layered scroll. Yet when she moved her intaglio away from the wall, she formed it into cubes.

One work is attached to a free-standing panel. M. Sedestrom Guthrie’s “Through the Glass” arranges photographs horizontally on one side of this panel. The photographs are views of a working window-washer through the glass of the window he is washing. The work also included some text. The text, which I’ve forgotten, was far too self-consciously serious for me to take seriously. I walked around the panel and found only a white plane on the other side. Life is usually not that disappointing.

Another work meets a wall in a more interesting way. Tomás Rivas’s “Erechtheum Uno, Dos y Tres” features delicate carvings into the surface of drywall panels leaning against the gallery wall. I particularly liked that Rivas included penciled outlines, some uncarved. I see in the drywall panels effects of a mundane call for beauty, modulated by the unchanging, supporting wall of the gallery. According to his biography, “His ongoing investigation of the representation of space addresses the complexity of art production today, where the ‘center’ and the ‘periphery’ vie for political clout within the mainstream.” Indeed!

One work offers a view into a long, narrow room. Kathryn Cornelius’ work “Address” lines this room, which is only about five feet wide, with roughly twenty white plastic chairs attached to the walls about four feet above the floor. Projected onto a wall just outside this room, a video evokes mass-market clothes hanging in a retail outlet.

An art reviewer writing in The Washington Post described “Address” as “making a statement about the violence and trauma that occasionally underlie the quiet domestic exteriors of our homes.” That’s a hackneyed interpretation. My sense is that this work evokes the tedium and worthlessness of many jobs. Working in retail, like blogging, forces you to confront ignorant and annoying opinions of ordinary persons. Just buy that one — it looks best!

Even worse are jobs involving endless, meaningless meetings. Cornelius has arranged the long, narrow room to provide a critical viewpoint on the center of this enterprise — the long, narrow table of the board room. Imagine if your family’s livelihood depended on an address that you had to make to lines of empty suits strictly ordered around the bored room table. You’d want to scream like you were on a amusement park ride. But if you did that, you’d be fired. March forward through the marble corridors of power, and do your job! 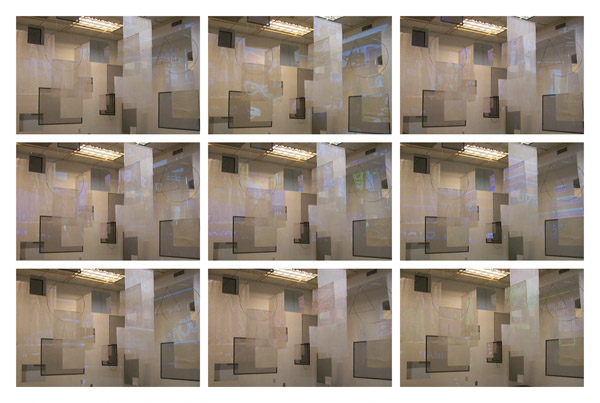 The best work in the exhibition, it seems to me, is Renee Butler’s “Movement in B Flat.” Forms with different shapes and reflective properties hang from the ceiling and break up video projected from orthogonal points. The effect is to ramify points of view on the projected (mundane) scenes and make those points of view physically explicit. At the same time, the whole ensemble, including the rectangular tiles and grated florescent light fixtures in the ceiling, forms a pleasing, dynamic harmony.

In the room containing “Movement in B Flat,” two couches rest against walls near where they meet in a corner. They signal a shift in viewing modes: from “look at art on the wall” to “watch television.” These are not the only possibilities. With care and respect for the construction of “Movement in B Flat,” you can move around it and even into it in some places.

Persons moving challenge the idea of points of view. Mobile phones have integrated space-annihilating communication with persons moving through the real world around themselves. Artists interested in spatial interpretations and points of view should take seriously this distinctively modern experience of communicating.

Get off the couch. Go see Conversions. And be sure to walk through “Movement in B Flat.”

5 thoughts on “get off the couch”