A great way to study the ancient Greek trireme is to build one. Frank Welsh, a trireme enthusiast and funder, John Morrison, an ancient historian, and John Coates, a former British naval architect, established in 1982 the Trireme Trust with the following objectives:

The Trireme Trust and Greek shipbuilders worked together to build an ancient Greek trireme. In 1987, the full-scale, fully functionally trireme Olympias was ready to be commissioned into the Greek navy and taken out for its first sea trials around the island of Poros.

I was part of the crew that rowed the Olympias in its first sea trial in the summer of 1987. The crew was collected mainly from British universities. We stayed for a couple of weeks in the Greek naval officers school on Poros. Being on the crew of an ancient Greek warship undoubtedly included great hardships and suffering. But by 1987, that job made for a very good time.

The trireme has 170 rowers arranged in three tiers: thranites (top tier), zygians (middle), and thalamians (bottom). I was a thalamian. Because the seats were fixed wooden benches, the effort of rowing was shifted towards the arms and back compared to boats with slides (rolling seats). From where I sat I couldn’t see the water nor feel any breezes coming across the boat. The rowing section leaders and master would shout out instructions, and I could see and feel the rhythm of rowers both in front of me and above me. 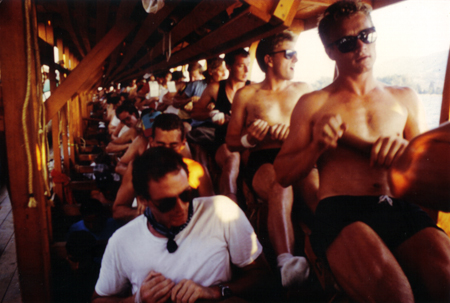 Being down in the boat has advantages and disadvantages. It was hot. I drank a lot of water and sweated it out. Arranging fresh water supplies must have been a major challenge. Being a thalamian wouldn’t be a good position for being rammed by another trireme. But it would be a great position in winter, or in battle with projectiles flying.

The boat itself is an engineering marvel. John Coates, the architect, would climb around the boat, fixing various broken parts, and talking with rowers. You can find more pictures of the boat here. That the Greeks could build hundreds of these boats 2500 years ago is amazing. That the Greeks and the Brits could together rebuild one based on scraps of archaeological and textual evidence is astonishing. I remember Mr. Coates saying that the design constraints implied much of the design. 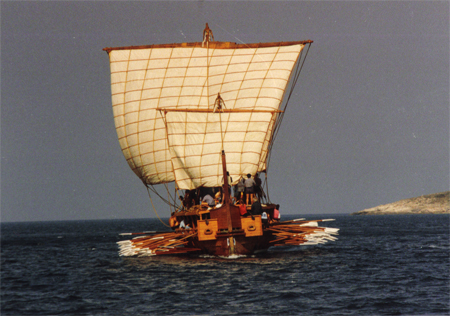 We rowed the boat through a variety of test maneuvers. One was was to accelerate to full speed and hold that speed for a short period. Another was to reverse direction quickly and turn sharply. Given that no one had any experience, and given the difficulties of coordinating 170 rowers, the boat performed amazingly well.

A recent study has analyzed the power output of trireme crews. The study found:

rowers of ancient Athens – around 500BC – would had to have been highly elite athletes, even by modern day standards.

Says Dr Rossiter: “Ancient Athens had up to 200 triremes at any one time, and with 170 rowers in each ship, the rowers were clearly not a small elite. Yet this large group, it seems, would match up well with the best of modern athletes. Either ancient Athenians had a more efficient way of rowing the trireme or they would have to be an extremely fit group. Our data raise the interesting notion that these ancient athletes were genetically better adapted to endurance exercise than we are today.”[1]

This is an interesting finding. The historical record seems diverse enough and clear enough to rule out performance exaggeration or misreporting, an issue that always should be considered carefully. Perhaps some subtle difference in ship design made a huge difference in performance. That seems highly unlikely.

Trireme crew performance is puzzling. I personally believe in the potential of modern athletes.

Update: The trireme crew’s t-shirt shows the different oar shapes for the rowers at different levels in the boat.

[1] Quote from Leeds University Press Release. These findings are also reported in Stephanie Pain, “When men were gods,” New Scientist, Feb. 10, 2007, pp. 46-7. That article provides a few additional details. It notes that ancient writers consistently indicate that triremes crews could row at 13-15 kilometers per hour for 16 hours or long. Modern measurements indicate that 30% of the crew’s power output is lost. But even with 100% power efficiency, the crew could not achieve ancient performance. The New Scientist article is not scholarly documentation of the study. Such documentation apparently is not yet available.

17 thoughts on “science in action: the trireme Olympias”