As part of the Art on Call project, the Southwest neighborhood of Washington, DC is refurbishing about 40 police and fire call boxes still existing in the neighborhood. The Dupont Circle and Sheridan-Kalorama neighborhoods of DC have completed similar projects, while the Foxhall neighborhood is moving forward. In Southwest, the Earth Conservation Corps, an organization that has made important contributions to community life in the Southwest, recently started repainting Southwest call boxes. Refurbished call boxes could help to signal Southwest’s long history and vital present.

Washington, DC, installed a fire alarm telegraph system in 1864. The system initially had twenty-five call boxes. By 1881 the system had expanded to eighty call boxes and incorporated about 200 miles of telegraph wires. In 1926, Washington, DC had 1500 call boxes. The call box system remained in operation until 1976, when DC established emergency 911 telephone service.[2] 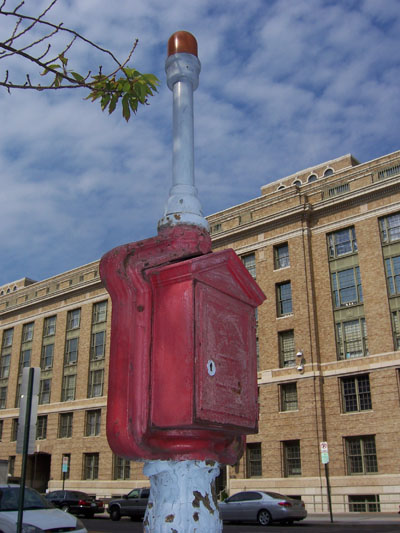 The Federal Communications Commission (FCC), whose headquarters is located in Southwest, has played an important role in the development of public safety communications. The FCC worked with AT&T to define 911 service in 1968. In 2000, the FCC established rules and timetables for mobile telephone operators to provide emergency 911 service with location identification (enhanced 911). In 2005, the FCC required a class of Internet telephony (VoIP) providers to implement 911 service. Public safety requirements are currently a major issue in the FCC’s 700 MHz band plan and license assignments.

View historic call boxes near the FCC in a larger map

I suggest that some call boxes be refurbished to include communication technology directing call-box users to socially identified “hot” sites. A screen in the call box might present a choice among a small number of sites. When the call box user selected a site, the call box would provide information about the site and directions to it. Like the historic call boxes, the refurbished call boxes would be connected to a network, but now the network would be the Internet. The basic idea would be to update continually the list of hot sites based on choices at the call boxes and other indications of current hot sites or events. With respect to the later, one could set up a website where visitors could vote for events to be downloaded into the call boxes. Unlike social rating features on Internet services such as YouTube, Digg, and many others, this system would publicly communicate relevant information about socially defined “hot” sites in a real-world neighborhood.

Perhaps volunteers from the FCC could work with other volunteers to implement a great new communication service in call boxes in the Southwest neighborhood around the FCC. Count me in for such a project.

Update: Lida Churchville, who works on the Southwest Call Box project, told me of another police call box that I hadn’t noticed. I’ve updated the text and the map above to include this additional call box.

[1] William F. Channing first described a fire alarm telegraph system in 1845. Moses G. Farmer, “one of the ablest and most ingenious telegraphic engineers in the country,” implemented Channing’s system in Boston in 1852. See Channing, William F., The American Fire-Alarm Telegraph, A Lecture Delivered Before the Smithsonian Institution, March, 1855 (Boston, Redding & Company, 1855) p. 10. The above description of operation of the Boston system is based on id.

[2] On the establishment of the DC fire-alarm telegraph system, see District of Columbia Fire and Emergency Medical Services (FEMS) History, p. 2. The date given, July 1, 1884, clearly is a mistake; it was July 1, 1864. For information about the three engine companies started in that year, see DCFD Company History. The information about the system in 1881 is from the Annual Report of the Fire Commissioners, as reported in the Washington Post, Sept. 13, 1881, p. 3. Subsequent information is from the Paul K. Williams (DC Heritage Tourism Coalition), History of District of Columbia Fire and Police Call Boxes.

6 thoughts on “call boxes for what's hot in SW DC”