The magic lantern was the first device that could display at zero marginal cost many large images to large groups of persons. Magic lanterns were for sale in London as early as 1663. They projected an image on a glass slide through a lens to a distant screen.  By the nineteenth century, magic lanterns had became a popular means for displaying images in a wide variety of circumstances.  The success of the magic lantern, like the rapid rise of commercial photography, indicates high popular demand for images. 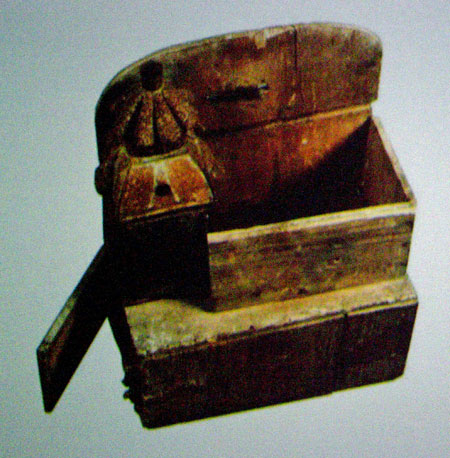 In eighteenth-century Europe, itinerant “showmen” offered shows using magic lanterns.  The early showmen in London were called Galantee showmen or Savoyards.  These names suggest that they were predominately foreign.  By 1788, Galantee showmen were sufficiently well-recognized in London to be used by a leading caricaturist to satirize a leading political figure.  He was depicted “exhibiting, by means of a magic-lantern, the magnified figures of different objects on the wall.”[1] The above image shows a wooden magic lantern that itinerant showmen used. It included protected storage and display spaces for the glass slides and was carried on the showman’s back.[2]

Projected-image shows began in Japan in 1803. Called utsushi-e, they employed multiple, hand-held projection devices (furo) made of wood. The Minwa-za Company of Tokyo has brilliantly recreated utsushi-e performances. The above video clip, from a Minwa-za Company performance, suggests the popular appeal of utsushi-e.[3] Compared to glove puppet shows, utsushi-e performances are starker — the lit figures contrast sharply against the black background and change discontinuously with the switching of the glass slides.

By the mid-nineteenth century, magic lanterns spanned a wide range of business possibilities.  About 1850, a street worker in London remembered his work in the 1830s:

A month before Christmas … we went with a galantee show of a magic lantern. We showed it on a white sheet, or on the ceiling, big or little, in the houses of the gentlefolk and the schools where there was a breaking-up; it was shown by way of a treat to the scholars. There was Harlequin, and Billy Button, and suchlike. We had 10s. 6d. and 15s., for each performance, and did very well indeed. I have that galantee show still, but it brings in little now. … The galantee show don’t answer, because magic lanterns are so cheap in the shops. When we started, magic lanterns wasn’t common, but we can’t keep hold of a good thing long in these times. It was a regular Christmas thing once – the galantee show. I can make, in a holiday time, 20s. a week at present; but that’s only at holiday times, and is just a mere casualty a few times a year.[4]

To compete with the cheap, popular magic lanterns available in stores, successful magic lantern shows invested more in their shows — more powerful lanterns, better quality slides, and well-practiced musical and acting routines as part of the show.  In London, the most highly capitalized show was at the Royal Polytechnic Institute:

From 1838 to 1876, the Polytechnic produced extraordinary shows that dazzled two generations. The shows used giant lanterns with slides that were sometimes two feet long. Over 900 “Polytechnic” slides were exquisitely painted by the specialist firm of Childe and Hill, and Childe’s dissolving views and elaborate special effects were an important part of the shows’ popularity. The program was changed regularly during the year and included battlefront reports of the current wars, and fairy tales such as “Aladdin’s Lamp.” The highlight of the year was The Christmas Special, featuring (of course) Dickens’ classics like “Gabriel Grubb.”[5]

Following the first public use of limelight — intense white light thrown off from limestone heated in an oxygen-hydrogen burner — in the Covent Garden Theatre in London in 1837, powerful magic lanterns like the Polytechnic’s put lantern slides “in the limelight”.

Magic lantern shows were highly popular in the U.S. At the end of the nineteenth century, there were 30,000 to 60,000 lantern showmen.  For comparison, in 1900 about 27,000 persons were photographers, and about 36,000 persons in total were journalists, authors, and scientists. [6]  Measured by employment, putting on image shows was a bigger business than photographing and writing.  Public libraries collected and circulated lantern slides. In 1914, well past the peak popularity of magic lanterns, 6% of items circulated from the Cincinnati Public Library were lantern slides.  Vast numbers of lanterns slides have survived to the present time.  At the Magic Lantern Society’s recent Thirteenth International Magic Lantern Convention, many magic lanterns slides from the early twentieth century could be bought, some for as little as a dollar. 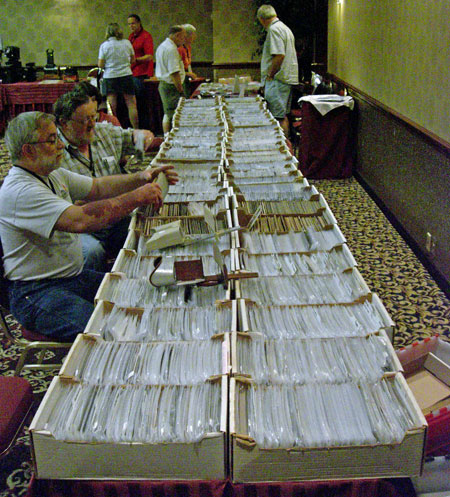 [2] Deac Rossell presented and described this image in his fascinating presentation, “Laterna Magica,” at the National Gallery of Art, July 13, 2008. Rossell emphasized that the device was well-designed to meet the particular needs of itinerant showmen.

[3] From The Minwa-Za Company of Tokyo’s performance of “Daruma Yawa” at the Freer Gallery, Washington, DC, July 10, 2008. Machiko Kusahara offers much information about utsushi-e at the Media Art Plaza.

[6] Id. is the source for the estimate of lanternists.  The figures for photographers, journalists, authors, and scientists are from the U.S. Census of 1900.  For occupational census counts for photographers and authors (and related occupations) from 1850 to 2000, see Tables C1 and C2 in Galbi, Douglas (2003), “Copyright and Creativity: Photographers and Authors.” The American Magic-Lantern Theater recreates high-quality U.S. magic lanterns shows from the 1890s. See trailer.

One thought on “demand for images”

Leave a Reply to The Topiary Cow Cancel reply