Consider two very long tales. The longest tale printed with a Latin or Cyrillic alphabet is Madeleine de Scudéry’s Artamène, ou le Grand Cyrus.  This type of work is known among specialists as a “roman de longue haleine” (long-winded novel). First published in Paris, 1649-1653, Artamène consists of ten volumes encompassing 7,443 pages and about 2.1 million words. A second long tale is Samuel Richardson’s Clarissa, or, the History of a Young Lady, published in London in 1748. Its first edition has seven volumes with a total of 2564 pages and about a million words.[1]

While they were long tales, Artamène and Clarissa were also best-sellers of their times. One scholar declared of Artamène:

from 1649 to 1654, from one end of France to the other, at the court and in the most aristocratic circles, as well as among the more cultivated bourgeoisie, at Paris and in the provinces, in all ranks of a society the most polite in the world, one read them not merely with pleasure, one seized upon, one devoured bit by bit as they appeared, every one of those ten great volumes.[3]

In the course of printing, the printer increased the print run for currently printing volumes and printed additional copies of earlier volumes. While printing of the first edition finished in 1653, by 1655 the printer had already produced a complete fourth edition and a printer in England had already printed an English translation of the full, ten-volume work.[4] From 1654 to 1660, Scudéry produced another ten-volume work Clélie, Histoire Romaine. That action testifies to the success of Artamène. Clélie turned out also to be highly popular.[5]

Just as did Scudéry, Richardson quickly followed one long tale with another.  About five years after writing and publishing Clarissa, Richardson wrote and published a new work, The History of Sir Charles Grandison (1753). Its first edition has seven volumes comprising 2459 text pages and about 907,000 words.[8] Three editions comprising 6,500 sets were printed within a year.[9] Both the size and print runs of Grandison suggest the prior success of Clarissa.

Long tales published in the twentieth century differ significantly from Artamène and Clarissa. Marcel Proust’s À la recherche du temps perdu has nine volumes totaling about 3,200 pages and 1.5 million words.[13] Despite considerable advances in writing and printing technology, Proust’s work was published over a fifteen-year period (1913-1927), while Scudéry’s Artamène, about 50% longer, was published over only a five-year period (1649-1653). Moreover, Artamène was a best-seller, while À la recherche du temps perdu was far from a best-seller. The first volume of Proust’s work had an initial print run of 1,750 copies, and perhaps 4,100 copies were printed between 1913 and 1918.[14] A best-seller in the U.S. about this time would sell 900,000 copies to a population about twice the size of France’s.[15] Other long tales of the twentieth century attracted even less popular attention than Proust’s work.

Vertical integration favors the production of the long tale. The longer the tale, the greater the cost and the risk in printing it.  Richardson was not only an author; he was also a master printer who printed his own works.  Thus he did not have to pay another printer for the cost and risk of printing a long tale.  The more imperfect the market for printing and risk-bearing, the greater the advantage to being able to assume both these functions within an author-printer enterprise.  Richardson produced Clarissa and Grandison with the advantage of vertical integration at a time when transaction costs associated with the nascent novel-printing business were relatively high.

Social influence favors the success of the long tale. Recent research indicates that greater social influence favors greater concentration of demand among the most highly popular works.[17]  Salons and coffee houses were important social institutions in seventeenth-century France and eighteenth-century England. Scudéry herself conducted at her Paris home an important salon known as Samedi:

the main purpose of the salon was for amusement. Among the activities were excursions, elegant dinners, and surprise visits to friends staying in the country. The glory of a certain pastry shop in rue Saint-Honoré that Mlle de Scudéry and her friends loved to frequent has come down to us and we also know of Mme Aragonais’ dolls, which the ladies of the Samedi dressed in the current mode. Other diversions were the experiments done by Claude Perrault, architect and anatomist, to observe the chameleon’s ability to change to change color according to its environment. … Poems were exchanged, of course, as were certain gallantries…[18]

The vibrant salon world of seventeenth-century France created extensive, powerful channels for social influence. Social influence arising from these salons, and from Scudéry’s position as a leading salonnière, are probably an important part of the explanation for the long tail. 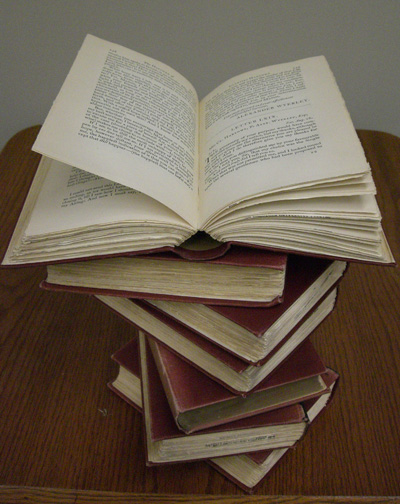 The communication industry has changed greatly since the time of Artamène and Clarissa. The average duration of online videos watched in the U.S. in March, 2008, was only 2.8 minutes per video.  That’s much, much less than the 250 hours it probably took to read the best-seller Artamène in seventeenth-century France. Less vertical integration on the supply side and less social influence on the demand side may be an important part of the explanation for this huge difference.

5 thoughts on “explaining the long tale”