Modern bureaucratic art is unjustly deprived of the spotlight it deserves in leading museums and galleries in Washington, D.C. The Hirshhorn’s museum’s ongoing exhibition, The Panza Collection, leads the way with a needed expansion of artistic appreciation. One work exhibited is Lawrence Weiner’s REDUCED. The exhibition documentation explains:

Lawrence Weiner gained international recognition in the late 1960s when he began using text as his primary means of expression.

Bureaucrats have been using text as their primary means of expression since the invention of text in ancient Mesopotamia about 5000 years ago. 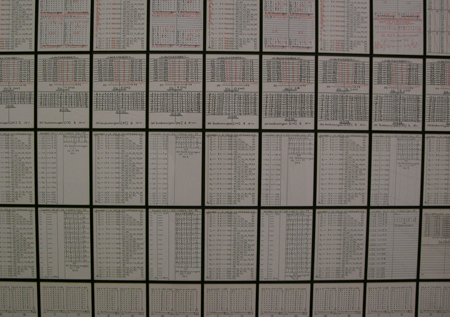 The modern artist who best exemplifies bureaucratic art unquestionably is Hanne Darboven. The Panza Collection includes her work 27K-No8-No26 (excerpt shown above). Technically, it consists of 149 pages of written numbers and some text. It has the feel of an accountant’s working papers, but is somewhat more tightly structured. The work brilliantly captures the process of making and editing documents. Best of all, it represents the astonishing volume of work that dedicated bureaucrats produce.

Surprisingly, Darboven received highly academic training at the Staatliche Hochschule für Bildende Künste in Hamburg, but apparently has no significant on-the-job experience in a major bureaucracy. Yet, as a great artist, Darboven seems to have intuited the essence of the bureaucratic form. An art critic insightfully observed:

Over time, time has become the focus of Darboven’s art. … The calendar, which subsequently formed the foundation of Darboven’s art practice, again offered a universal orientation, embodying a given, prefabricated, ready-made temporal system. Calibrated in her work in many ways over almost three decades, it has provided the basis of an arbitrary artistic system that has the appearance of objectivity. Conjoining a rigorous numerical process with free-associative roots, and tight rational thought with intellectual freedom, Darboven’s capricious sense of time has resulted in diverse monumental works that may span a month, a year, even a century, all recorded day by day.

A focus on time, recorded day by day, is central to bureaucratic art. On any given day, leading artists can tell you how many more days remain before they can retire.

Will Willkinson at Fly Bottle considers Technocracy vs. Liberal Democracy. He reasons:

Will needs to ponder 27K-No8-No26. Bureaucrats in all types of organizations and political systems mark time.

Leo Babauta at zenhabits offers 10 Steps to Take Action and Eliminate Bureaucracy. But if you eliminate bureaucracy, there will be no one to study what action to take. Taking action without reason is unenlightened.

Scott Erb at World in Motion recognizes the importance of bureaucrats. The success or failure of any government depends on bureaucrats.

Marco’s Webdev Notepad considers the relationship between bureaucracy and agile software development. He declares that “bureaucracy is seen as inhibitor to software process improvement efforts and particularly to agile methodologies” and that a “cultural shift towards agile will make many ‘bureaucrats’ uncomfortable.” That’s absurd. As Moe convincingly shows, bureaucrats are extremely agile.

SengAun Ong at Tipskey submits Work Email Tips and remarks, “Bureaucrats at work like me can be efficient in email writing too!” Handling email more efficiently means that you can produce more documents in a given amount of time. Highly recommended.

Jay Wilkinson, writing on the blog of the Montclair State University sociology department, describes the Department of Motor Vehicles at the “epitome of bureaucracy.” Most DMV’s are outstanding bureaucracies. Nonetheless, only 20-30 localities have Top-10 bureaucracies.