A mosaic showing seven men dressed in classical garments in a classical setting was buried in Pompeii when Mount Vesuvius exploded in 79 GC.  The mosaic probably dates from the early first century BGC and probably was a copy of a late-fourth century Athenian painting.  Commonly described as depicting Plato’s Academy, it also represents an archaic Greek tradition of seven sages.  This tradition was widely discussed in fourth-century Athens.[1] 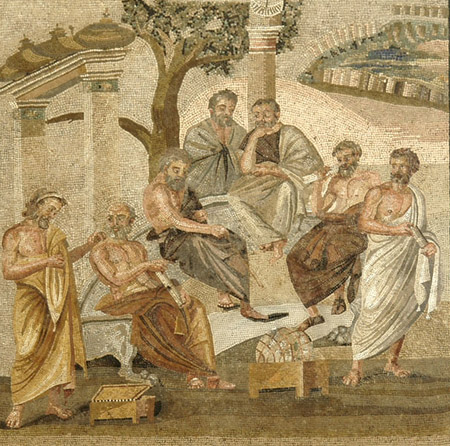 The men in the mosaic are engaged in a scholarly dispute.  Three men look at another diadem-wearing man on the far left, who seems to be reading a scroll that the mosaic artist did not represent.  Two other men follow a third  figure pointing to a globe in the center. All of the first group hold scrolls.  Moreover, the figure on the far left is standing next to an opened box in which the scrolls would fit.  None of the second group hold scrolls.  Written texts thus seem to be an important aspect of the men’s oral dispute.[2]

The Socratic Method as currently understood is associated with oral questions and responses.  The mosaic suggests that, perhaps as early as the late-fourth century BGC, studying texts was an important, and perhaps controversial, aspect of oral school teaching.  The Socratic Method that Plato institutionalized in his Academy apparently co-existed with social, textual study.

For the image above, I’ve cropped the mosaic’s border to focus on the action.  The full image is shown at higher resolution at the History of Ancient Rome website.  The mosaic, which is held in Italy’s National Archaeological Museum in Naples, is on display through March 22, 2009, at the U.S. National Gallery’s exhibition, Pompeii and the Roman Villa: Art and Culture around the Bay of Naples.

[1] The city on the upper right and the olive tree in the middle (small green leaves, black olives) allude to Plato’s Academy in Athens.  The catalog for the Pompeii exhibition at the National Gallery states that most scholars agree that the figure in the middle (highest figure) is Plato.  But the supporting evidence for this view is meager.  On the dating of the mosaic, see Westgate, Ruth (2000) “Pavimenta atque emblemata vermiculata: Regional Styles in Hellenistic Mosaic and the First Mosaics at Pompeii,” American Journal of Archaeology, v. 104, n. 2, pp. 255-75. On the Greek scene that the mosaic represents, see Elderkin, G.W. (1935) “Two Mosaics Representing the Seven Wise Men,” American Journal of Archaeology, v. 39, n. 1, pp. 92-111. Id. associates the mosaic with a painting of Demetrius Phalereus at the Athenian Lyceum and dates its composition between 317 BGC and 307 BGC. An alternate theory places the painting at the sepulchral monument of Isocrates, erected about 338 BGC (id. p. 100). On representations of the seven wise men, see Richter, Gisela Marie Augusta (1965) The portraits of the Greeks. [London]: Phaidon Press, pp. 81-82, figs. 314-320.  For the earliest citation of the seven wise men in extant Greek literature, see Plato, Protagoras, 343A.

[2] Writing about the same time as Plato, Xenophon of Athens, in his Memorabilia, has Socrates saying, “The treasures also of the wise of old, written and bequeathed in their books [scrolls], I unfold and peruse in common with my friends.”  (Mem. 1.6.14)  The mosaic might in part be an allusion to this Socratic image.  Socrates was executed in 399 BGC, before the formation of Plato’s Academy.  The box may be an allusion to the cista mystica, a sacred chest used to house snakes in the mystery cults.  A similar mosaic, dating to the second century GC and found in Sarsina in Northern Umbria, now the Villa Albani, shows the figure on the left holding a snake.  See Richter (1965) fig. 319.  or Elderkin (1935) Plate XXII.B. Note that the figure on the left is the only figure wearing a diadem.  Interpreted as a cista mystica, the box, diadem, and scroll suggests other-worldly knowledge, in contrast to the central figure’s pointing to the world.

One thought on “seven sages: context of the Socratic method”