Music, visual art, literature, and information tend to be associated with different categories of media and communicative experiences.  Recent media convergence, however, has opened a wide range of choices in how to organize technologically mediated communication.  The U.S. National Gallery of Art’s exhibition, Heaven on Earth: Manuscript Illuminations from the National Gallery of Art, displays innovative media organization that predates by more than a half-millennium our age of new media.

The exhibition includes large, beautifully illuminated choir books from Europe in the thirteenth to fifteenth centuries. The choir books were large so that the choir could read from one book the words and notes that they would sing together. Along with these written representations of the sacred Christian music were miniature paintings related to the subject of the music and designed around the initial letter of a song-word on the page.  Known as historiated initials, these paintings both re-enforce the meaning of the music and accent its sensuous beauty.

A choir-book page created in Lombardy, 1450/1460, is a wonderful artifact of convergent sense in mediated communication. It includes four lines of musical notation, words in two colors, a large historiated initial M, and a lavishly decorated border that undoubtedly formed the left half of a fully bordered opening for the choir book. The choir looked into this ornate window to sing the Magnificat, a song of Mary, the mother of Jesus.  The historiated initial shows an angel announcing to Mary that she will give birth to the Messiah.  Just visible behind the central column of the M is a book. Mary reading a prophetic book (Isaiah) became a typical feature of Annunciation iconography in the late Middle Ages.  Thus the moment of this choir music is individual, contemplative reading interrupted by world-changing bodily action of the word within Christian world history. 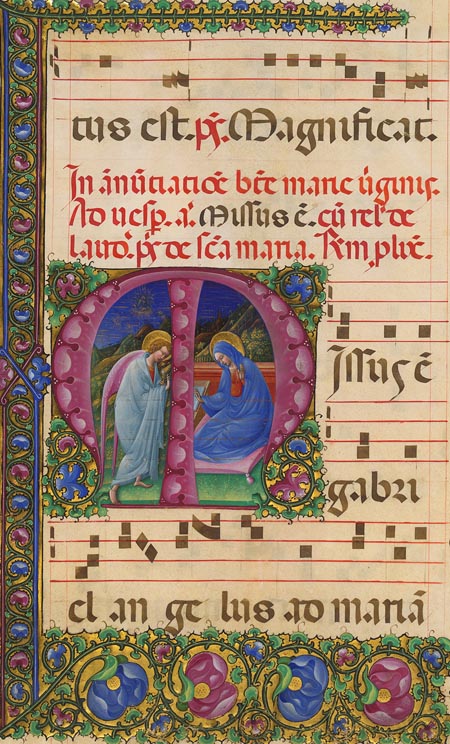 Prior to about a millennium ago, letters dominated the texture of texts in Europe.  Texts consisted of columns of letters, without upper-and-lower case distinctions, without spaces between words, without periods at the end of sentences (or any other punctuation), without paragraphing, and without paratextual headings and other organizational indicators. Reading meant serial processing of letters. Transposed to audiovisual media,  reading texts was once like watching a traditional television channel.

The rise of scholasticism in twelfth-century Europe prompted reformating of texts to aid accessing and processing information in scripture. A leaf from a Tuscan bible from the fourth quarter of the twelfth century highlights this development.  The leaf provides a section of text from the Gospel of Mark.  The text has no chapter, paragraph, or verse indicators. But spaces separate the words, and periods terminate sentences. Moreover, marginal notes record scriptural cross-references, and an inserted prologue precedes the text of the Gospel. Between the prologue and the Gospel is a seventeen-point summary of the Gospel, with points that are numbered serially with Roman numerals. A huge, lively, painted bookmark indicates the beginning of the Gospel proper.  In the midst of this informational apparatus is an illumination showing a pensive St. Mark, at a lectern, looking out at the viewer. The leaf leads the reader into analytical scripture study, but also hints at the different bodily joy that the choir books invoke.

Media in the Middle Ages were generally neither transparent nor neutral.  The exhibition includes what was originally a frontispiece (c. 1140) to an instance of Bede’s Commentary on the Apocalypse.  The illustration shows a dove (the Holy Spirit) inspiring St. John who dictates to Bede.  This intricate mediation gives Bede’s text its interpretive authority.  More generally, institutional church services, saints, shrines, and relics provided consciously present, differentiated media  for communication with God.  End-to-end communication was extraordinary visions or revelations. Intermediaries that highly structured communication were normal and central to the medieval communications business.

If you can, go see Heaven on Earth at the National Gallery of Art. You may never again get such an opportunity here on earth.